Aeromexico #1: but only if you include its regional partner Aeromexico increasingly needs its regional partner, Aerolitoral, operating as Aeromexico Connect, seen here launching three routes from Toluca in February, in order to maintain its overall position as Mexico’s largest airline. On its own, LCCs Volaris and InterJet are both bigger in terms of monthly seats.

Registering still as Mexico’s largest airline (according to Innovata data for May 2013), Aeromexico is increasingly reliant on its regional partner Aerolitoral or Aeromexico Connect to ensure it retains this crown. While the carrier is #1 in terms of ASKs offered in Mexico, primarily because of its long-haul network, it charts in third spot in terms of both monthly seats (behind InterJet and Volaris) and flights (behind Aerolitoral and InterJet). It is only when Aerolitoral is added, in both instances, that Aeromexico crawls back to the top of the pile in terms of these three metrics of airline size.

While Aeromexico’s ASKs have increased by 1.3% since May 2012, Volaris’ has increased by 24.1% and at InterJet by 15.8%, resulting in the former being just 87 million ASKs (down from 314 million) behind the legacy carrier, whereas the latter has reduced its gap from 616 million to 525 million. As a result of a 3% reduction in monthly flights, and InterJet’s 9% growth, Aeromexico has traded places with the fast-growing LCC. With Volaris’ 22% increase in flights over the last 12 months, it has significantly reduced the gap between #3 and #4 positions. Looking at monthly available seats, the inexorable rise of Volaris, which posted a 26% rise in this particular metric, has seen it leapfrog both Aeromexico and Aerolitoral into second place, despite their own respective growth.

Unsurprisingly, all of the airline’s biggest 12 routes, which represent close to 20% of Aeromexico’s weekly seats, involve the SkyTeam carrier’s Mexico City hub. Topping the list are domestic services to Monterrey, which is Mexico’s ninth largest city, but third largest metropolitan area, and Guadalajara, which is the second largest city in the country. 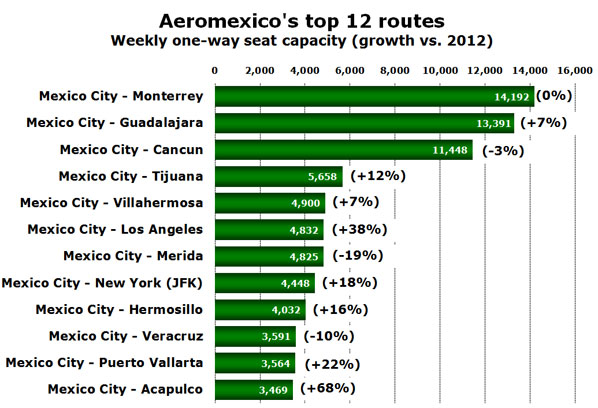 Three of the top 12 routes have seen a decline in weekly seats since the same week in May 2012, while eight have increased and one, the largest, to Monterrey, has remained flat year-on-year. Highlighting the significant cross-border economic, cultural and social ties, two of the top 12 routes are to the US, namely to Los Angeles (#6) and to New York JFK (#8).

For the purposes of this graph, domestic operations and flights to the US have been excluded. In terms of weekly seats, flights within Mexico generate 87% of Aeromexico’s total capacity, while operations to the US represent a further 8% of the remaining 13%, leaving all other countries to squabble over the residual 5%. 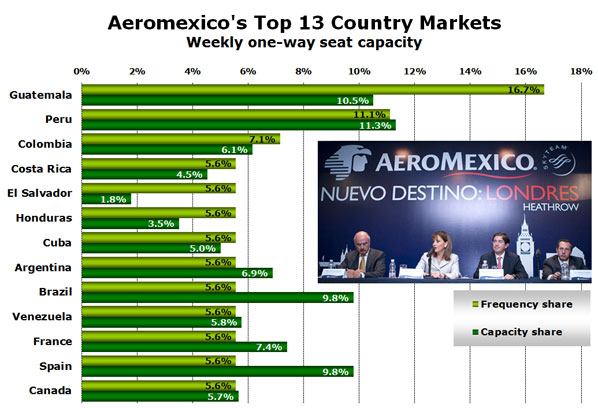 Due to matching levels of frequency (daily operations), the top 12 country markets have been extended to 13. While Guatemala is the top country market in terms of weekly frequency, with its thrice daily ERJ170/190 service between Mexico City and Guatemala City, the double-daily 737-800 operation to Lima pushes Peru to the top of the league when weekly capacity is considered. France and Spain represent the only countries served by the airline outside of Central and South America.

Three new US routes this summer

According to anna.aero’s New Route Database, Aeromexico is starting seasonal operations from Cancun (from 1 June) and Huatulco (from 7 June) to Los Angeles, both with 737-800s and both ending in September. In addition, its regional partner Aerolitoral, operating as Aeromexico Connect, will start on 20 June a year-round, twice-weekly ERJ-145 operation from Hermosillo to Las Vegas (via Puerto Penasco).

Despite this growth, Aeromexico will have also curtailed 10 routes between August 2013 and 2012. Four of these will be from Cancun, including international flights to Lima and Bogota, with the remaining six routes being cut across five other Mexican stations.