Air China’s four-weekly service connecting Beijing and Geneva reflects the market’s potential for non-standard solutions – more and more international services from China bypass historical gateways, be it in China or at the other end of the route.  Read more about Geneva’s first Asian link in anna.aero analysis .

To say that China’s international air travel market is growing is not to say it all: According to the anna.aero New Route Database, 46 international routes involving Mainland China have been already launched this year, including Sichuan Airlines’ service from Chengdu to Melbourne and China Eastern Airlines’ Shanghai Pudong to San Francisco, CA. As Air China, the country’s largest carrier in terms of European routes, launched Geneva as its 12th destination in the continent last week, anna.aero examines the changes in China’s international connectivity since last summer.

International capacity grows by 50% since 2007; first signs of slowdown?

Interestingly, when compared to the pre-crisis 2007, weekly seat capacity in the market will have increased by over 50% in July 2013. In fact, international capacity to China has been growing uninterruptedly since 2009, when a loss of 9.2% was noted. 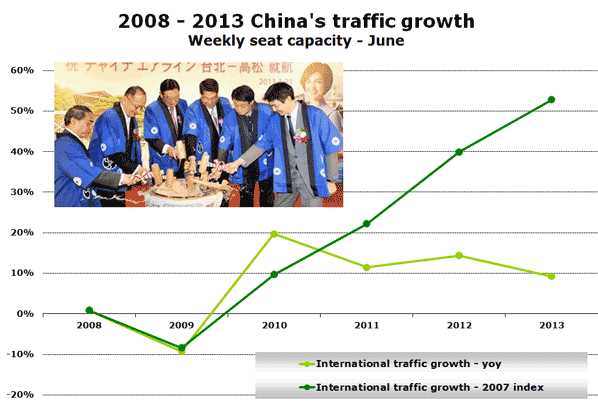 Examination of Innovata average weekly data for July 2013 shows that 9.3% more seats are offered by airlines on international routes from China than in the same period a year ago. While this means a slowdown compared to the preceding year, when seat capacity grew 14.4% year-on-year, many new routes are still being launched and capacity upgraded on the existing ones.

Perhaps unsurprisingly, China’s largest international country markets are close to home, with Taiwan, South Korea and Japan topping the capacity chart. Additionally, each of the three enjoys double-digit share in international frequencies, too. However, while services to Taiwan and South Korea are on the rise, Japan sees a considerable loss of capacity this July, as a total of 23 routes have been withdrawn since July 2012. Please note that OAG Schedules iNET data we used for this analysis, qualifies Hong Kong as a domestic Chinese airport. While this could be argued, it does help to avoid the unnecessary distortion that would be created by the inclusion of Hong Kong as an international market, owing to the volumes of capacity involved. 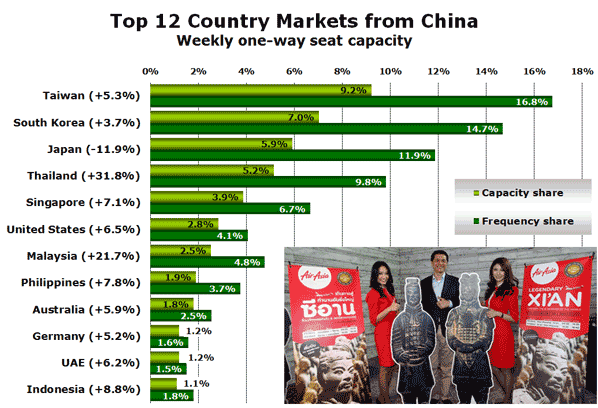 On the opposite end of the spectrum is Thailand, which in July 2013 will have 31.8% more capacity to China than a year before. Even though the net route gain equals zero, the 18 new services launched from Thailand to China since July 2012 have more than compensated the losses. Moreover, a further 19 routes saw upward capacity adjustments, versus the seven that experienced cuts. Thai Airways still dominates the market (growing +13.3% in July 2013), but China Eastern Airlines and China Southern Airlines allocated more seats (28% and 20% respectively) on routes to Thailand this July.

Second fastest-growing country market in July is Malaysia, whose carriers dominate services to China. Malaysia Airlines has 30% of the July capacity, while two of AirAsia Group’s carriers – AirAsia and AirAsia X – have 27% each. However, three Chinese carriers are present in the market, China Southern Airlines (capacity up 10.3% in July 2013), Xiamen Airlines (+3%), and China Eastern Airlines (+2.8%).

Three Chinese airports offer more than a million monthly international seats in July 2013 – Hong Kong (2.6 million), Shanghai Pudong (1.5 million) and Beijing (1.0 million), with the latter only passing the threshold in the course of last year. Together, they command 68.7% of China’s international capacity, a slight deterioration compared to the same period a year before (-0.6pp).