Europe has retained its #2 region status for Emirates, thanks to it starting routes like its daily Warsaw service, which began on 6 February. Since anna.aero last conducted this regional analysis of MEB3 routes in February 2011, Europe has also taken second spot for Etihad Airways, displacing the Middle East.

From time to time, anna.aero likes to cast its eye over the respective networks of the MEB3, now an accepted industry term, used of course to group the combined might of Emirates, Etihad Airways and Qatar Airways. Indeed, it has been over two years since we last looked at these particular metrics.

With each airline, and indeed their home hub airports, seemingly locked onto an insatiable aircraft, route and therefore capacity growth trajectory, these three airlines still have the capacity to excite most of the world’s airports in terms of the potential passengers each of them can bring. While most of the network planning community has clear idea of the bragging rights; Emirates being #1, followed by Qatar Airways and then Etihad, comparing their relative size is still a useful exercise.

Emirates’ fleet still has 60% more seats than other MEB3 members

An analysis of the passenger aircraft fleets for all three carriers reveals several interesting points:

The table below summarises the fleets of all three airlines, listing the number of aircraft of each type and the upper and lower limit of the number of seats in each aircraft type.

Analysis of the networks for all three carriers reveals how focused the carriers are on different regions of the world. Looking at weekly departing seat capacity by geographic region (but excluding departing capacity from each airline’s home base) reveals that all three carriers have most seat capacity assigned to routes in Asia. This fact remains unchanged since anna.aero conducted the same regional seat analysis back in February 2011. 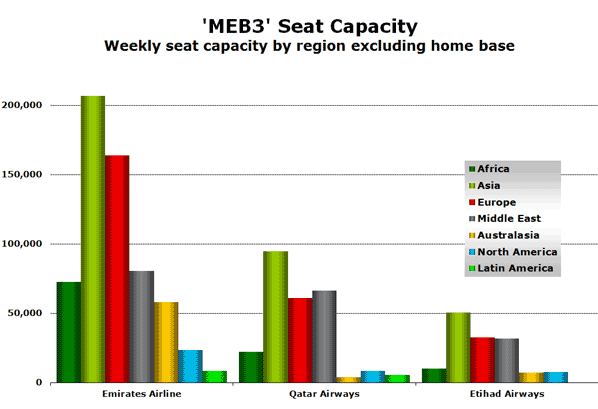 In terms of new routes announced for the next 12 months, according to anna.aero’s New Route Database, Etihad leads the way with five, including its first to South America. However, the remaining two-thirds of the MEB3 are not far behind with four apiece, including Qatar Airways’ recently announced daily operations to Philadelphia, PA, due to start on 2 April 2014.