American Airlines entry into the market from Dallas/Fort Worth, TX, to Seoul Incheon last week surely stirred it up for Korean Air. Read more about this exciting launch in  this week’s route news .

Serving as the main gateway to the world’s 15th largest economy, Seoul Incheon Airport made the headlines last week, when it saw the launch of American Airlines’ service from Dallas/Fort Worth, TX. Chuck Schubert, the airline’s VP Network Planning, confirmed that dynamic growth in demand in South Korea was key for the launch decision: “The country’s continued growth as a key business market has created increased demand for direct travel to and from the region.” In fact, Seoul Incheon, has grown by 68% in the last decade, including a quick traffic recovery following slight declines in 2008 and 2009 (-4% and -4.8% respectively).

South Korea’s #1 airport; seasonality on par with others in the region

A recent anna.aero analysis of the South Korean market has shown that Seoul Incheon is not only the largest but also the fastest-growing airport, having handled 39 million passengers in 2012 (up 11% on the preceding year). Moreover, the facility serves prevailingly international traffic (less than 2% was domestic last year), benefiting from large hub operations by both Asiana Airlines and Korean Air. Significantly, while domestic traffic in South Korea was virtually stagnant in 2012 (up 3% on 2011), the number of international passengers achieved an annual increase of 12%, falling short of 48 million by just 40,000. 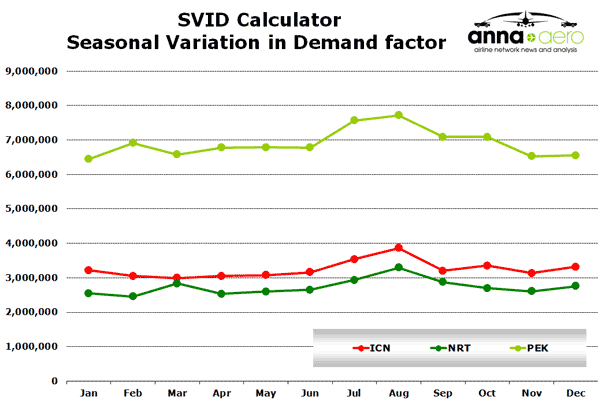 With its strong position as a major Far Eastern gateway, Seoul Incheon is a natural competitor against the other large transfer hubs in the region, notably so for the neighbouring Beijing Airport in China and Narita Airport in Japan. Using the anna.aero Seasonal Variation in Demand (SVID) calculator, our data elves have established that all three Asian airports have nearly flat demand patterns, each generating an “excellent” result. While Beijing Airport is by far the largest of the three (81.9 million passengers in 2012, up 4% annually), it also handles the least international passengers in proportion to overall traffic. Unlike Narita, Beijing outperforms Seoul Incheon in terms of seasonal resilience; however, at intervals of 0.2, the differences are marginal (Beijing – 0.4; Seoul Incheon – 0.6; and Tokyo Narita – 0.8).

Vientiane gains the most capacity; Hong Kong is the largest route

Examination of OAG Schedules iNET data for June 2013 reveals that Hong Kong and Narita are the busiest international destinations from Seoul Incheon in terms of seat capacity – just short of 125,000 and 110,000 monthly seats respectively are offered in these two markets. The largest long-haul destination – Los Angeles, CA, is also Seoul Incheon’s 12th largest international destination, but only attracts only around 40% of seat capacity dedicated to Hong Kong.

Perhaps surprisingly, the fastest growing route as measured in seat capacity in June 2013 is the – still relatively thin – route to Vientiane in Laos. Compared to the same period last year, the incumbent Jin Air doubled the number of weekly frequencies it offers in the market, while Lao Airlines matched the South Korean carrier’s offering when it launched its own service in late December 2012.

Interestingly, the market from Seoul Incheon to the far eastern Russian Vladivostok noted an annual seat capacity growth of almost 77%, placing itself as the seventh fastest growing international destination. Korean Air, which maintained its daily offering, now faces additional capacity from both Vladivostok Air (daily, up from five weekly a year before) and Asiana Airlines (also daily). The latter carrier commenced flying on the 2,300-kilometre route in mid-November 2012, winning the anna.aero Route of the Week award.