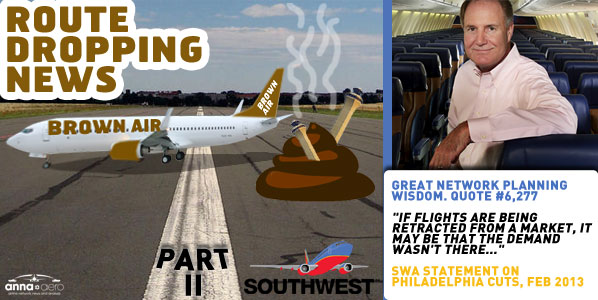 At Philadelphia, a market Southwest entered in 2004 when US Airways was spiralling, Southwest has dropped another five destinations (at least during the peak summer period), leaving it with eight cities versus a high of 20 destinations in mid-2008. However, the 34 system-wide route cuts have been more than compensated by 58 new Southwest routes added.

After last week’s analysis of which routes easyJet had dropped since last summer, this week we take a closer look at Southwest Airlines, the legendary US LCC which is the second biggest airline in the US domestic market (after Delta Air Lines) in terms of weekly seats. Comparing data for airport-pairs served during peak weeks in August 2013 and August 2012, reveals that Southwest has ceased operations on 34 airport-pairs involving 39 airports.

Several of these route operate for the last time on 10 August 2013, just before the period analysed, while several of the Florida routes go on hiatus, before resuming in early November. Of the 34 routes, a few are also operated by Southwest’s subsidiary AirTran, such as Fort Lauderdale – Philadelphia, even during the Florida ‘off-peak’ period of August and September.

What is noticeable is that many of the dropped routes are quite short, with eight routes being less than 300 kilometres, three of them intra-Florida routes. This leaves Southwest with just three routes in its network of less than 300 kilometres; Austin – Houston (238km), Baltimore/Washington – Norfolk (256km), and Dallas – Oklahoma City (291km). 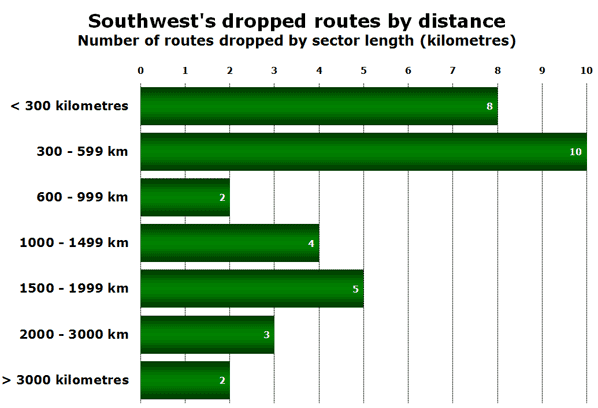 At the other end of the scale, Southwest is dropping three routes measuring over 2,500 kilometres; Chicago Midway to Santa Ana, California (2,787km); Las Vegas to Norfolk, Virginia (3,468km); and Las Vegas to Providence, Rhode Island (a whopping 3,803km). The average sector length of the dropped routes (weighted by weekly frequency) is 787 kilometres, significantly below last year’s average of 1,096 kilometres.

Among the 39 airports, 22 see the demise of just a single route, but Orlando and Philadelphia have each seen Southwest drop five destinations between August 2012 and August 2013. In the case of Orlando this mostly involves the axing of very short intra-Florida sectors, where passenger processing time is now adversely affecting total journey times when compared with the alternative of travelling by car. At Philadelphia, a market Southwest entered in 2004, against an apparently ailing US Airways, it is also dropping five destinations, though the three Florida services resume later in the year. In four of these (the exception is Houston Hobby) Southwest competes directly with a resurgent US Airways, leaving Southwest with just eight destinations served non-stop come August. Clearly, US Airways will not be unhappy with these developments, but no other carrier gains particularly in these point-to-point markets, as two-thirds of them are not operated by any other carrier at present. While the loss of 34 routes is obviously regrettable for those passengers impacted by the decision, it should be noted that Southwest will have added 58 new routes during the period analysed.

It is only 13 months ago that Southwest started operating 737-800s for the first time, with 175 seats compared with 137 on its 737-700s/300s. Since then it has taken delivery of roughly three new -800s per month, so that 43 of Southwest’s fleet of over 570 aircraft now comprise the larger 737 variant. As a result, analysis of Southwest’s network this summer (not including AirTran) reveals that while the number of sectors flown is down marginally (less than 1%), the number of seats flown is up by 3.2%, while ASKs (Available Seat Kilometres), which take into account sector length, are up 5.5%, with the average sector length rising 2.3% from 1,096 kilometres to 1,121 kilometres. 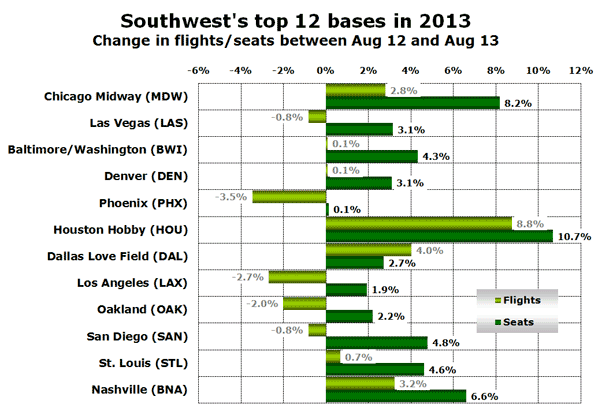 Looking at Southwest’s 12 biggest hubs in terms of seat capacity, all 12 of them are growing this summer in terms of seats offered, but five of them are actually shrinking if the number of weekly departures are measured instead. This can be explained by the growing presence of the larger -800s in these markets.