Three new destinations in 2013 on three different continents. So far this year Turkish Airlines has already launched over a dozen new routes from a variety of Turkish airports. From its home base at Istanbul Atatürk it has launched new services to Houston (North America), Kuala Lumpur (Asia) and Friedrichshafen (Europe).

Europe’s major economies continue to face challenging times, and this is reflected in the number of seats on offer from the airports in those countries. Analysis of schedule data for this coming August compared with August 2012 shows that while France and the UK have a small increase in seat capacity, Germany is flat, while Italy and Spain show significant declines. Overall, across all European countries, summer peak seat capacity is up just under 2%. Without the notable growth of two non-EU member countries, Russia and Turkey, seat capacity would be flat this summer. 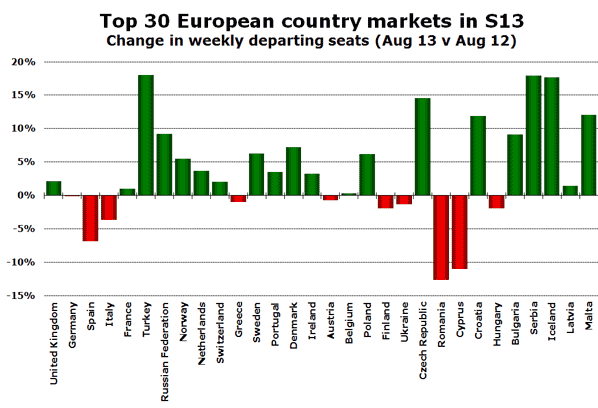 Proving that not all is doom and gloom across Western Europe, the three Scandinavian countries of Denmark, Norway and Sweden are all reporting capacity growth of just over 5% this summer, while the much smaller Icelandic market is up almost 18%.

Looking at weekly seat capacity at European airports in August, Ryanair is now 50% bigger than Lufthansa and easyJet, with Turkish Airlines set to leapfrog the latter two to move into second place in 2014. Air France’s apparent significant downsizing can be explained by the creation of its new subsidiary HOP! which has taken over a lot of regional capacity. Similarly, Lufthansa is in the process of transferring many non-hub feeding services to its low-cost subsidiary germanwings. 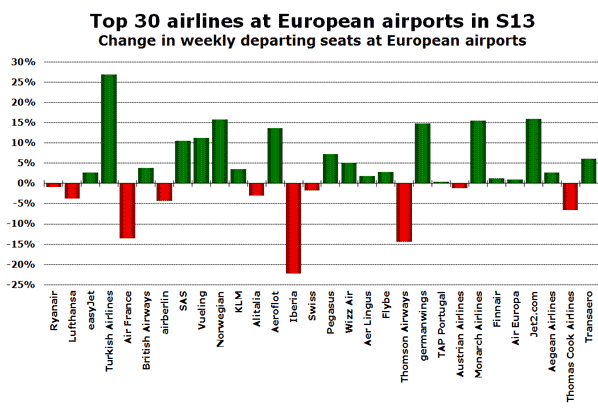 If, instead of looking at seat capacity, ASKs (Available Seat-Kilometres) are analysed, which take into account sector length, then Delta Air Lines muscles its way into the top 10 at number 10, while Emirates ranks 11th. The biggest airlines that were operating in August 2012 that are no longer flying using their own code this summer are Aerosvit, WindJet, Blue1 (which now operates solely on behalf of SAS) and bmibaby.

Istanbul’s two airports are the fastest-growing in Europe

Looking at Europe’s top 30 airports this summer, 21 of them are reporting an increase in seat capacity. Of the nine where the number of weekly seats has been reduced, three are in Spain (Barcelona, Madrid and Palma de Mallorca), and two are in Italy (Milan Malpensa and Rome Fiumicino). The others are Athens, Brussels, London Stansted and Vienna. 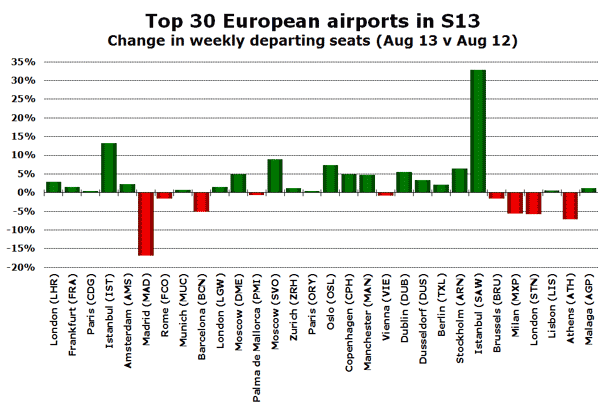 Thanks to the amazing Turkish Airlines, Istanbul’s two airports are the fastest-growing, the only airports in the top 30 with seat capacity up more than 10% this summer. The next three fastest-growing airports are Moscow Sheremetyevo (+9.0%), Oslo (+7.4%) and Stockholm Arlanda (+6.5%). Europe’s four biggest hub airports (the so-called FLAP airports) are all still growing this summer, confirming the importance of hubs. London Heathrow is up 2.9%, Amsterdam 2.2%, Frankfurt 1.4% and Paris 0.4%.