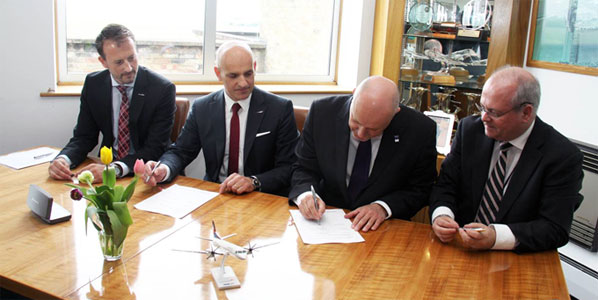 Swiss regional carrier Darwin Airline announced this week that Cambridge Airport would be its first base in the UK, when it launches flights to Amsterdam, Geneva, Milan Malpensa and Paris CDG from the beginning of September using one of the airline’s 50-seat Saab 2000s. At present, the only other scheduled service from Cambridge Airport is with Blue Islands to Jersey during the peak summer season. The airport has recently refurbished its terminal, which now includes a business lounge, a Costa Coffee, and complimentary Wi-Fi.

Initially, Darwin will offer 12 weekly flights to Amsterdam, six to Paris, four to Milan and three to Geneva. The one aircraft operation starts on weekdays at 06:55 with the morning departure to Amsterdam, with an evening return getting back at either 20:15 or 21:35 depending on the day of the week. Paris flights operate in the late morning, with Milan and Geneva sharing the afternoon slot.

To begin with, the airline will only have codeshare agreements with Alitalia, but the airline has confirmed that it is in negotiation with other SkyTeam members (Air France and KLM presumably) regarding similar arrangements.

Just 35 kilometres south of Cambridge down the M11 motorway lies London Stansted Airport, while Norwich Airport is situated about 90 kilometres north-east of Cambridge. The Amsterdam, Geneva and Milan markets are all served from one or both of these airports, but Paris services are conspicuous by their absence, possibly due to the improved high-speed Eurostar rail service between central London and central Paris.

In order for Darwin to fill its 12 weekly, 50-seat operation from Cambridge (over 50 weeks to therefore include any schedule reductions during public holidays etc) to Amsterdam, the airline will need to attract 36,000 annual passengers to fill these flights to an acceptable 60% load factor. Assuming no market stimulation, this will mean enticing 9% of the 2012 demand currently using services at Norwich and London Stansted. Using the same calculation for the Geneva and Milan Malpensa routes, the new Cambridge services will have to encourage 13% of easyJet’s Geneva passengers to switch airlines, but just 4% of Ryanair’s Milan Bergamo operation.

Maurizio Merlo, CEO at Darwin, said “As we expand within Europe, the UK is a key market for us to further establish and we are delighted to open our new base in the heart of East England. Cambridge is at the forefront of several business sectors and spearheading the UK’s economic growth – it is thriving and vibrant, one of the UK’s most valuable and affluent markets. The team here at Cambridge Airport and many of the city’s stakeholders have inspired us to invest and connect the region to Europe and beyond.”

Commenting for the airport owners Marshall, Steve Jones, managing director of Aviation Services, said, “The opening of this new and exciting base by Darwin Airline is a strategic step in our development of Cambridge as a regional international airport. This puts our city firmly on the international transport map, making it easier for people from around the world to get here. As an established regional carrier in Europe, we feel that Darwin Airline is the perfect partner for Cambridge Airport going forward, offering long term expertise, award-winning service and global connectivity.” 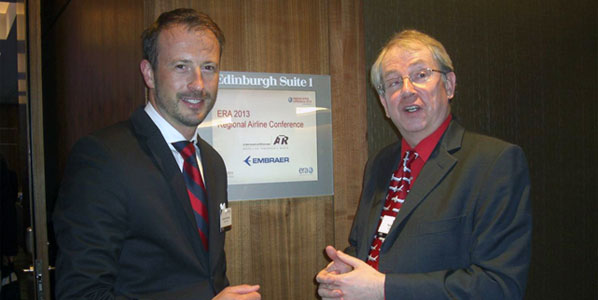 Christian Schneider, CCO, Darwin Airline and anna.aero's Chief Analyst, Ralph Anker, discussing Darwin's potential expansion into the UK market at last month's ERA conference in Edinburgh. The Saab 2000 operator this week revealed that Cambridge would be its first UK base, starting in September.

Note: This interview took place at the ERA Regional Airline Conference in Edinburgh in April, before the Cambridge base was announced.

anna.aero: Can you explain the origin of the name of your airline, and why it is singular?

Christian Schneider (CS): The name Darwin Airline refers to the element of Charles Darwin that the most adaptable species (or business model) will survive, or be sustainable. The founders of Darwin Airline took this as their spirit, after Swissair and Crossair merged and as a consequence the regional network in Switzerland was significantly reduced. The founders decided to name it singular as most airlines have just one airline, even though they regard themselves as plural.

anna.aero: Who are the owners of the airline?

CS: Darwin Airline is a privately owned company, where the main shareholders are a small group of individuals in Ticino. This structure of ownership is a good advantage of our company as it enables Darwin Airline to remain independent and to work together with all sorts of airlines, regardless of their alliance.

anna.aero: How many passengers did you carry in 2012 and how does this compare with 2011?

CS: In 2012 we transported 240,000 scheduled passengers. In 2011 we transported 278,000 passengers but we served additional routes compared with last year. The South Italian market of Foggia Airport with Foggia-Milan, Foggia-Turin and Foggia-Palermo as well as the Geneva-Zurich, Geneva-Genoa and Geneva-Luxembourg routes. As a result of our new strategy in 2013, the first quarter of 2013 was with 65,727 passengers transported already significantly better – by +88,5% – than in the same period last year (34,861 pax transported in January-March 2012). This increase is mainly due to the fact that we have also increased the number of our destinations.

anna.aero: How would you describe yourself as an airline? What are your target markets and where are you looking to expand?

CS: We are a Swiss Regional Multi-Alliance Carrier operating in niche markets, thus being able to cooperate with different airlines from different alliances in low competitive markets. In 2012 for example we signed commercial agreements with Alitalia, BelleAir, Czech Airline and Swiss. This demonstrates our ability to take opportunities where they are. Our current markets are mainly Switzerland, Italy and Czech Republic. We currently evaluate new markets to be entered; Germany, the United Kingdom and France being on top of that list.

anna.aero: What happened with Baboo at the end of 2010?

CS: Darwin Airline was in contact with the owners of Baboo since 2010 and finally took over some parts of the assets of Baboo in 2011, including two Bombardier Q400s, the route network and commercial contracts. The airline Baboo as well as the brand consequently left the market after the partly purchase from us.

anna.aero: What is your current fleet size and what plans are there for growth in 2013?

CS: Today Darwin Airline operates a fleet of eight aircrafts, of which seven are our own Saab 2000 and one is sub-leased from a German operator AvantiAir. By the end of 2013 we will grow to a fleet size of at least nine of our own Saab 2000s.

anna.aero: Do you co-operate with other airlines on any of your routes? And do you operate any flights on behalf of other airlines?

CS: Besides commercial agreements like Special Prorate Agreements, we have additionally agreements with numerous European airlines. Since 2012 we have a marketing and brand agreement with Alitalia and are regarded as their preferred Regional Carrier in Italy flying in codeshare, with BelleAir we have a strategic partnership in order to make use of synergies. Together with our partner Czech Airlines we operate in codeshare between Switzerland and Italy to their HUB in Prague. On Top of that we are the ACMI provider for SWISS on the route from Lugano to Zurich.

anna.aero: What is the mix of business and leisure traffic on your routes?

CS: Our majority of passengers are business related travellers and they account for around 75%. In order to obey also seasonal demand, we offer in addition in the summer period flights to leisure destinations such as St Tropez, Olbia, Biarritz or Trapani. This is compensating the reduced number of business travellers in the summer and increases the utilization of our fleet.

anna.aero: What are the major challenges that Darwin Airline faces in 2013?

CS: I believe that 2013 will be at least as tough as 2012. The main challenges are the unpredictable fuel price, the European economy remaining in crises and a general rise in costs related to operating an aircraft. The pressure on yield will continue to be high and airlines need to work strongly on their costs. We at Darwin Airline have already implemented the right measures and strategy to be fit and profitable for the future!