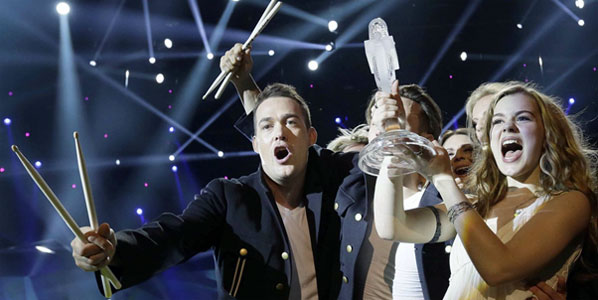 Fending off a strong challenge from last year’s winners, Azerbaijan, Denmark won Eurovision 2013 at the weekend. According to anna.aero’s analysis, there are currently no direct flights between Denmark and second placed Azerbaijan, however the Scandinavian country does have flights to the rest of the top 10 – Ukraine, Norway, Russia, Greece, Italy, Malta, Netherlands and Hungary. That level of connectivity will certainly help next year when Europe comes to Denmark.

With the Danish nation still on the come down from its win at this year’s Eurovision Song Contest (renowned for its quirky performances, eccentric outfits and bizarre lyrics), the country’s airports will be rubbing their hands together, expecting a traffic boost next year, which could well help them top 30 million annual passengers for the first time. Having grown from just over 20 million annual passengers a decade ago, 2013 should see Denmark’s airports post a return in excess of 29 million if it continues to achieve the average growth rate of 4% since 2003. 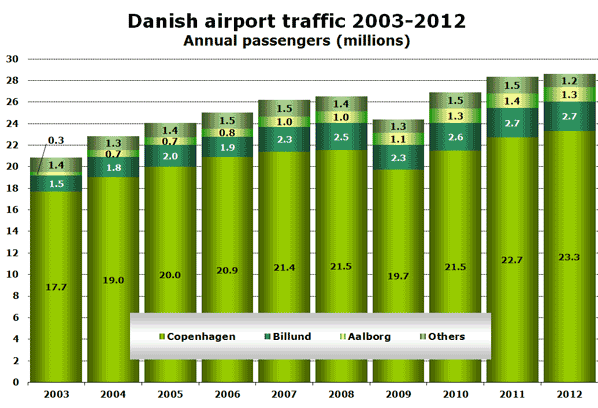 As may be expected during a recession, Denmark’s airport traffic has consolidated to its biggest three airports — namely Copenhagen, Billund and Aalborg. In 2012, the three airports commanded 96% of the country’s total traffic, representing a 3% increase over their 2003 penetration. Despite growing from around 18 million annual passengers in 2003 to over 23 million last year, the country’s main gateway, Copenhagen, has seen its share of the Danish market fall by three percentage points in that period, from 85% to 82%, as air travellers have been offered more destination choice from regional airports. Indeed, the home of SAS’ biggest hub, has seen its share actually recover over the last two years from its 2010 result of below 80%.

Annual scheduled seat capacity from Denmark (comparing year ending April 2013 to year ending April 2012) to the 55 countries served by direct flights (plus one versus 2012 – Slovakia, Dominican Republic and Tunisia gained; Mexico and Syria lost) has declined by 1.5% year-on-year. The blame for this reduction can be firmly laid at the door of the Danish domestic market which has tumbled by 22% in the last 12 months. Although airlines like Danish Air Transport have stepped in to fill some of the capacity void, much of the decline comes as a result of Cimber Sterling’s closure in May last year, as the airline operated over 60% of Denmark’s domestic flying. 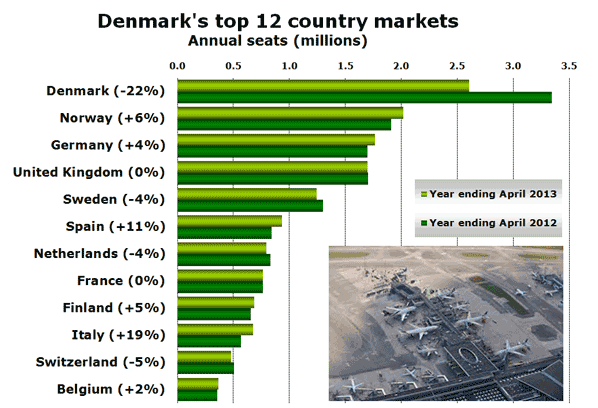 When anna.aero last looked at the country markets served from Denmark’s airports in 2008, many of the top 12 nations have remained unchanged nearly five years on, although many have switched positions. Domestic flying within Denmark, despite its recent annual capacity drop, has actually improved its respective position over the last five years, climbing from fifth position in the 2008 analysis, to first this time around. Netherlands (+2 positions), as well as Finland and Switzerland (both +1), represent the only other countries moving up the top 12, along with new entrant Belgium – replacing the United States, which has fallen to #15, behind Turkey and Poland.

To say the Danish market has been in a constant state of flux over the last decade is perhaps an understatement. Following the merger of Sterling European Airlines and Maersk Air in September 2005, Cimber Air then acquired the defunct Sterling Airlines in late 2008 (after it changed ownership several times, mainly at the hands of Icelandic investors) to form Cimber Sterling, only for it to succumb to the administrators in May last year.

Focussing on the last five years, there have been constants, notably #1 carrier SAS, which had 36% of total seats in the year ending April 2008 and currently commands 37% (year ending April 2013). In addition, hub carriers Air France, British Airways and KLM, as well as LCC Ryanair, have been ever present in the top 12 over the last five years. However, it is perhaps the meteoric rise of Norwegian, now the number two player in the Danish market (fourth in 2008), having grown its annual seats by over 450% to over three million, as well as easyJet (up nearly 170%), which was in lowly thirteenth in 2008 and now charts in third spot, that will be causing heads to be scratched at SAS’ HQ. Although it has not grown as fast (just 111%), airberlin has shot up from 25th to ninth, and SAS’ Finnish entity Blue1 has also risen impressively from 21st to fifth (+195%).

Heading in the wrong direction are Atlantic Airways, which has traded its fifth position for twelfth, its fall including the trimming of 17% of its flying in the last 12 months, as well as airBaltic, which has tumbled from tenth in 2008 to 27th this year, as the Riga-based carrier continues to distance itself from the hub of its former part-owner, following SAS’ disposal of its near 50% ownership stake in January 2009.