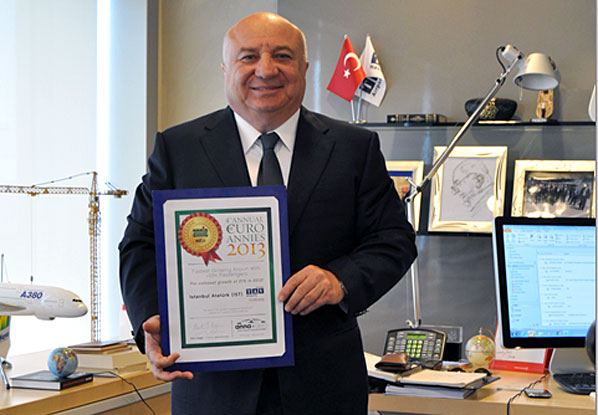 Turkish-tastic!!! Dr Sani Şener, President and CEO TAV Airports Holding cradles his Euro ANNIE Airport traffic growth award for “colossal” 21% growth in the biggest category (+10 million passengers). To find out why Turkey is booming join a worldwide audience of 800+ at the ACI EUROPE/ACI World Congress hosted by TAV at the Istanbul Congress Centre next month. Turkish Airlines CEO, Dr Temel Kotil, is slated as the keynote speaker (if he’s back from his mysterious leave of absence); Ryanair’s COO, Michael Cawley, and IATA’s Director General, Tony Tyler are among others who will engage in “The Airline Conversation.”

Yes, it’s that time of the year when anna.aero hands out its legendary Euro ANNIE awards to airports, based on rigorous, scientific data analysis and nothing else. These are the awards that can only be won by airports generating more passengers, and attracting more airlines and routes. This year we have nine prestigious awards, going to eleven different airports in eight different countries across Europe. 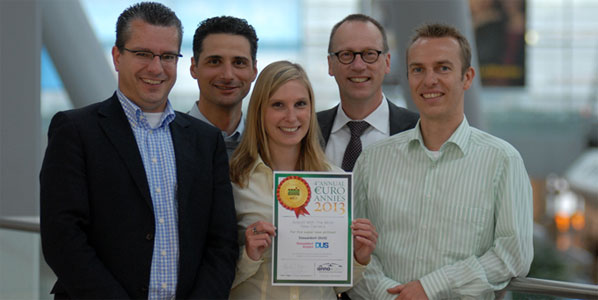 In what is possibly the most prestigious Euro ANNIE award, we have a three-way tie for the airports with the biggest net gain in the number of scheduled airlines operating. Düsseldorf Airport, Malta Airport and Warsaw Chopin Airport all reported a net gain four additional airlines, between August 2012 and August 2013. 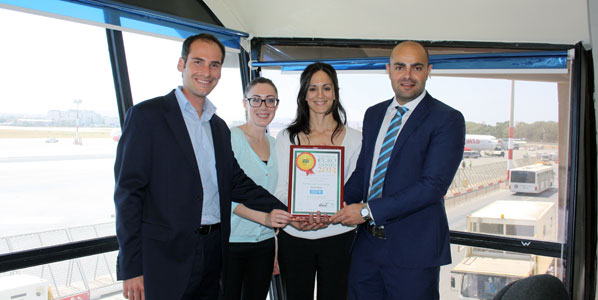 Four superb new airline signings took Malta to the front of the grid in the "airport with the most new carriers award." Sharing the joy against a backdrop of the Malta apron are Matthew Gusman, Executive Airline Marketing, Justine Baldacchino, Research Analyst, Tina Lombardi, Business Development, and Alan Borg CCO.

This category is dominated by two airports serving the same city, Istanbul. The rapid growth of Turkish Airlines, not only from its home base airport at Atatürk, but also more recently at Sabiha Gökçen, plus the on-going expansion of low-cost rival Pegasus Airlines at Sabiha Gökçen, helps the smaller airport just beat its bigger neighbour for the biggest net gain in destinations served non-stop. Sabiha Gökçen had a net gain of 25 new routes, while Atatürk was not far behind with 21.

Last year’s winner, Rome Fiumicino, loses out this year to Paris CDG. The busiest airport in France overtook the busiest airport in Italy, thanks to Paris CDG gaining a handful of airlines, while Rome Fiumicino saw a reduction in the number of airlines serving the airport, including losing three (Armavia, bmibaby and WindJet) that ceased operations completely. Paris CDG has so far this year welcomed newcomers Adria Airways, FlyNonstop and Sata International. 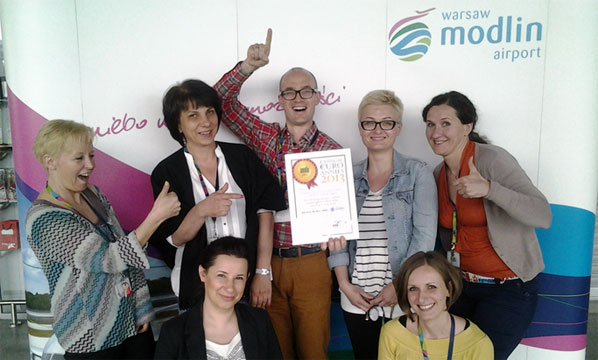 The only way is is up! The new Warsaw Modlin Airport won’t be in the smallest, under-1 million growth award category for very long – it will probably serve around 2 million in 2014 after the runway re-opens. “We hope to re-start operations in late June, or early July 2013 at the latest, and serve above 1 million in 2013” says, Piotr Lenarczyk, Aviation Sales Chief Specialist, pointing to the growth he expects to recapture.

Thanks to anna.aero’s comprehensive, free, downloadable database of airport traffic statistics which includes well over 300 airports across Europe, we have been able to identify the fastest-growing airports in pure passenger terms in six different size categories. The award in the biggest category (>10 million passengers) goes to Istanbul Atatürk, making up for being runner up in the “Airport with the most new routes” award. Frustratingly for Moscow Sheremetyevo, it is just beaten into second place for the second year running in this category.

It is noticeable that five of the six winners are in Central or Eastern Europe, with only Oslo Torp representing Western Europe. Given the economic malaise gripping much of Europe, this is not exactly a revelation. Bucharest Otopeni clearly benefited from the closing of nearby Bucharest Baneasa at the start of the last summer season. 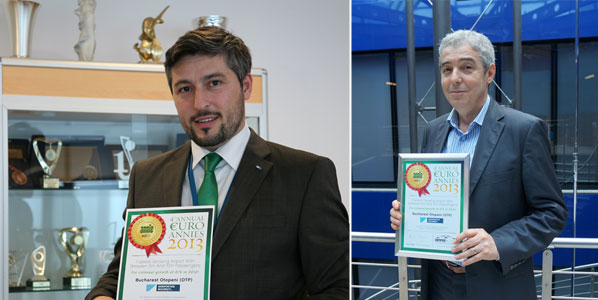 Bucharest Otopeni was so pleased with this award that it posed for it twice: With CEO Cornel Constantin Poterasu in front of the airport’s ‘other’ trophies, and then with Liviu Radu, Bucharest Airports National Company General Manager in less modest surroundings. There’s nothing modest about the award for 41% growth (41%!!!!!) in the 5-10 million airport growth category. (Nice photo Valentin.)

In the smallest size category, Warsaw Modlin Airport only opened in July 2012, and had processed almost 900,000 passengers by the end of the year. However, issues with the airport’s ILS and runway surface meant that the airport closed to commercial flights just before Christmas. The good news is that the airport has told anna.aero this week that the runway works should be finished by mid-June, while the CAT I ILS system should be available to carriers some time in August. Runner-up London Southend has had a similar trajectory, opening its new terminal just last year and welcoming easyJet as a based airline. Passenger numbers jumped from less than 50,000 in 2011 to over 600,000 in 2012. 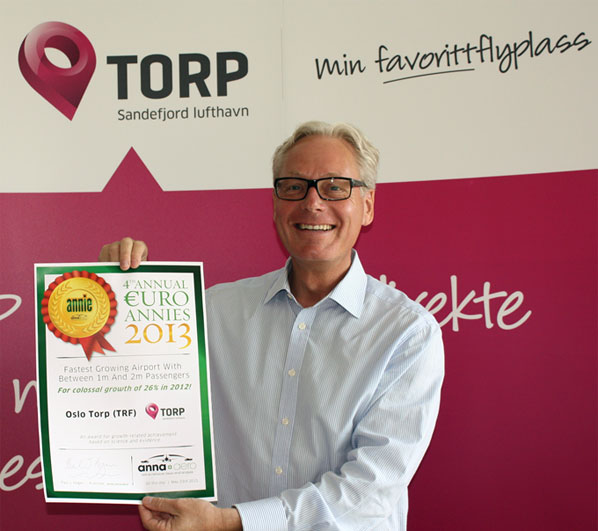 For airports, we have six prizes based on total passenger traffic data for 2012 (compared with 2011) in various airport size categories, plus another three awards based on OAG schedule data for August 2013 (two of which require comparison with the August 2012 data to determine the winner). When determining the number of ‘new’ routes or airlines, we have decided to look at net gains and losses so that lost routes or airlines are deducted from those gained. When determining whether a route or airline should be included in the data, a minimum requirement was set that the route had to be operated at least weekly (so four times per month) during the peak August month.