The launch of S7 Airlines’ service to Shimkent in Kazakhstan was celebrated earlier this year by the airline’s GM Novosibirsk and Central Asia, Yevgeniy Chernyshov; and the airport’s marketing team headed by Gregory Pomerantsev, Commercial Director (first right). Other destinations launched this year include Kiev Borispol and Vladivostok.

Russia’s largest airport east of the Urals is situated at the crossroads of major transit routes between Europe and Asia, so it shouldn’t come as a surprise that the airport focuses on attracting major global cargo freighters for technical stops as well as the development of passenger traffic. The latter seems to be working out well – in the first four months of 2013, passenger numbers are up by 4.5% for domestic and – perhaps more tellingly – by 32.4% for international traffic, as compared to the same period the year before. Gregory Pomerantsev, the airport’s Commercial Director, commented: “Using an attractive mix of incentives and marketing support helps us to attract new airlines and we expect to close 2013 with 3.7 million passengers.”

A total of 3.27 million passengers travelled through Novosibirsk Airport in 2012, an increase of 20.7% compared to 2011 and more than twice as many than a decade ago. While domestic traffic is still very important for the business, with 62% of the airport’s passengers travelling within Russia in 2012 (down to 57% in the first four months of 2013), this is down significantly from the 79% share of Novosibirsk’s traffic that domestic flying had in 2003. 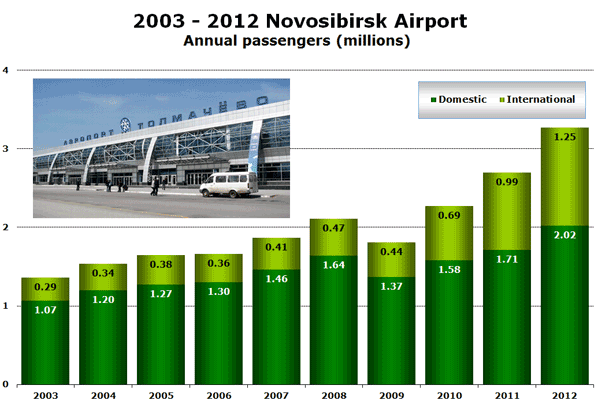 Airlines searching for new international routes into Russia and wanting to bypass Moscow seem to making Novosibirsk the winner – international traffic was up by 56.6% in 2010, 44.7% in 2011 and 25.9% in 2012. This is of course not to say, that the results for domestic growth were disappointing, as they hovered between 8.7% and 17.7% in that period.

Moreover, analysis of the airport’s monthly traffic figures using the anna.aero SVID Seasonality Calculator shows a considerable flattening of demand between 2011 and 2012, improving from “good” (6.5) in 2011 to “excellent” (4.5) a year later.

S7 Airlines, Novosibirsk’s based airline, is also the largest carrier operating at the airport. According to Innovata’s monthly data for June 2013, the carrier commands just under a third (31%) of domestic and half of international (49%) weekly seat capacity at the airport. 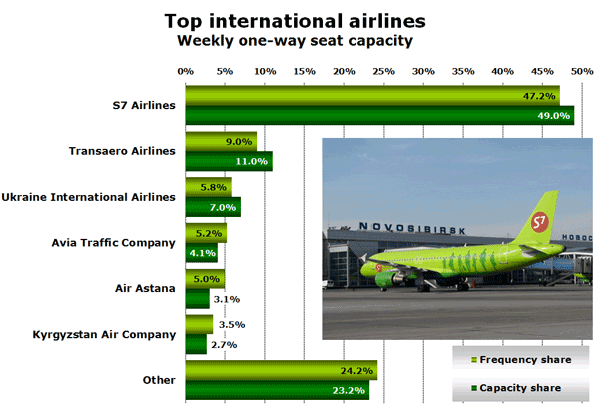 S7’s expansion of its Novosibirsk hub creates new opportunities for the airport and becoming a full-blown transfer airport is one of them, according to Pomerantsev: “In 2012, transfer traffic increased by more than 31% compared to the year before, mainly on Central Asian and Siberian routes, and during the first four months of 2013, the growth of transfer flows exceeded 70%.” With investments in the terminal and apron infrastructure already in the pipeline for 2013-2014, the airport is planning to reach up to half a million transfer passengers in 2015, a substantial increase on the 126,000 handled in 2012.

Bishkek is the largest international route; China and Europe underserved

Flights to a total of 33 international destinations are available from Novosibirsk Airport in June 2013 according to Innovata data. Given its geographical location in the centre of Eurasia, the airport’s main target markets are fairly balanced between Europe, South East Asia and CIS destinations, and this shows in the airport’s route network. The largest destination in terms of average weekly capacity is Bishkek, followed by Beijing and Kiev Borispol – an ex-AeroSvit route currently operated by Ukraine International Airlines. While the Kyrgyz capital, Bishkek, is offered by a selection of four airlines, the 3,000-kilometre route to Beijing is served only by S7 Airlines. Pomerantsev notes: “The route’s high potential is not fully explored and attracting a Chinese carrier is high on the priority list.”

Year-round European destinations are represented by Frankfurt (S7: 1 weekly service), Munich (S7: 1), Prague (S7: 2), Düsseldorf (Orenair: 2) and Barcelona (Transaero Airlines: 2). According to the airport’s Commercial Director, high levels of Europe-bound transfer traffic via Moscow help strengthen the case for Novosibirsk: “Many passengers use Moscow hub for travelling to and from Novosibirsk, taking advantage of the 14 to 19 daily flights on offer. With this in mind, we are working hard to attract carriers from Northern Europe (Helsinki and Stockholm), ensure direct connection with Italy (Milan), increased frequencies on existing German routes and possibly launch new ones (Berlin, Hamburg or Hannover).” In fact, the latter destination was operated by S7 with weekly frequencies between June and September last year.