Vancouver set for record-breaking year in 2013 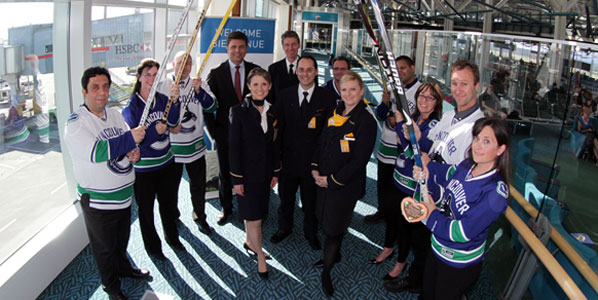 Launched on 16 May with a ceremonial arch of airport staff wearing Vancouver Canucks ice hockey team shirts was Lufthansa’s new seasonal daily A330 flight from Munich. “Europe is a major market for British Columbia and we are focused on ensuring adequate capacity to serve our tourism and business markets,” says Vancouver International Airport’s Director, Aviation Marketing John Korenic. The airport also welcomes Virgin Atlantic back this summer, which launched seasonal flights last year.

Serving one of the world’s most “liveable cities”, Vancouver International Airport was Canada’s second largest airport in 2012. The coastal seaport city in British Columbia is the eighth largest in Canada (just over 600,000 inhabitants in 2011 Census), however the wider metropolitan area boasts 2.3 million residents, making it the most populous in Western Canada and third in the country (behind Toronto and Montreal). Its ethnic diversity – over half of its residents do not speak English as their first language – has helped shape the airport’s network of services, and it is therefore punching well above its weight in terms of services to places like China. 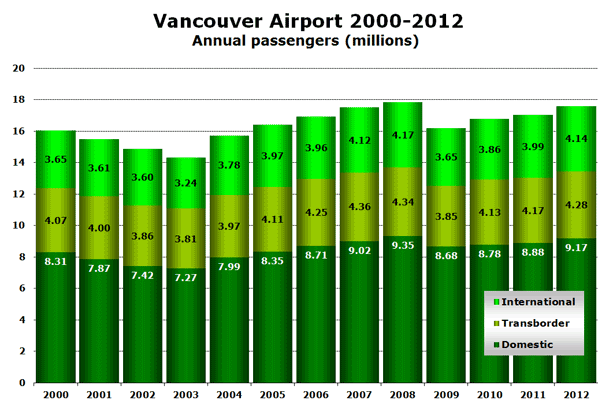 Clearly the airport suffered, as most airports the world over did, in terms of its annual passenger traffic between 2008-09, due to the economic malaise, representing the only black mark on the airport’s impressive report card over the last ten years. The significance of this near 1.7m annual passenger drop is made only the more apparent when compared to the 2002-03 drop caused by the SARS epidemic, which cost the airport over 500,000 annual passengers (plus potential growth). In terms of 2013 traffic prospects, John Korenic, Director, Aviation Marketing for Vancouver comments: “Passenger traffic is tracking as forecasted for the first quarter of 2013. We are forecasting 2.0% growth for 2013, resulting in record passenger volumes at Vancouver.”

SVID better than Seattle and Portland

Entering Vancouver’s monthly passenger data for 2012 into anna.aero’s recently launched Seasonal Variation in Demand (SVID) calculator, the airport performs brilliantly, generating a score of 1.49, giving it an “excellent” rating. This score is marginally better than that achieved in 2011 (1.64 – excellent), but it is worse than 2010’s result of 1.43. Vancouver’s 2012 score compares favourably to other airports on the west coast of North America, being marginally better than that scored by Seattle-Tacoma, WA (2.04 – excellent), as well as Portland, OR which posted a result of 2.16, but still “excellent”. 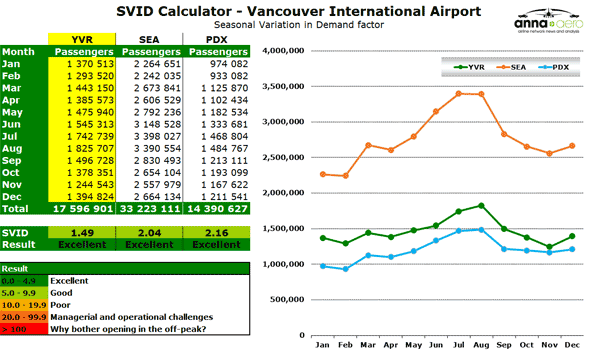 Commenting on the airport’s seasonality profile, Korenic adds: “We always endeavor to minimise our seasonality, which is typical of many Northern markets. The global awareness generated by the 2010 Olympics and what we have to offer during the winter season was significant. In addition, a primary benefit of our Gateway strategy is that it minimizes seasonality on our routes.”

Despite being twice as large as the airport’s other top 12 routes, services on the biggest two, flights on the mature domestic markets to Toronto and Calgary, are still showing signs of growth this year. When considering the same week of the year (May 20-26) for 2012 and 2013, total seats to Toronto have grown by 10%. While WestJet leads the way with 14% more seats, resulting from an extra five weekly frequencies (up from 52 to 57) and increased used of its larger 737-800s, the route’s other incumbent, Air Canada, has added another four weekly frequencies of its own (up from 101 to 105), delivering annual growth in seats of 9%. Seats to Calgary have not seen the same sorts of increase (+3% year-on-year), with WestJet hiking its weekly flight offer (from 81 to 84) to post a 6% annual rise, while Air Canada has maintained its weekly frequency and marginally increased its seats by less than 1%. In addition to these capacity increases, WestJet’s new regional airline, WestJet Encore, will also launch two daily Dash 8 Q400 services next month from Vancouver – to Fort St John (YXJ) and Victoria (YYJ). 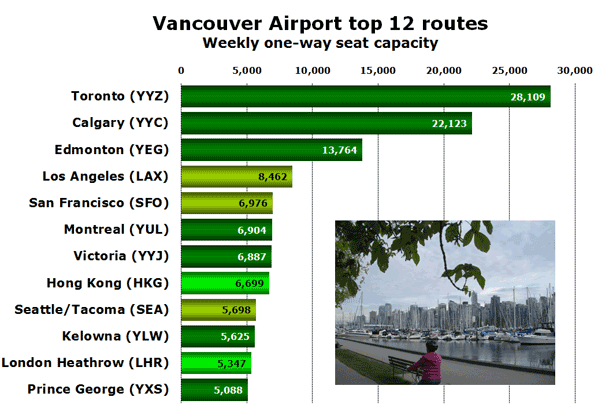 In terms of other routes breaking into this top 12, some Chinese destinations may well join Hong Kong and London Heathrow as being the only destinations outside of North America. “Vancouver leads North America with the greatest number of frequencies to China. This summer all carriers will realise significant growth between Vancouver and China,” states Korenic. He expands: “China Eastern is going to double daily on Shanghai [presently daily, along with Air Canada, and Vancouver’s #19 largest route], China Southern is increasing to daily on Guangzhou [presently thrice weekly], both Air Canada and Air China will grow from seven to 11-weekly on Beijing [presently Vancouver’s #15 largest route], while Sichuan Airlines is increasing from three to four weekly on its Shenyang-Chengdu route.” As a result of these frequency hikes, the summer peak capacity to China is up 35%.

For the purposes of this graph, domestic flights and services to the US have been excluded. In terms of weekly seats, flights within Canada generate 71% of Vancouver’s total capacity, while operations to the US represent a further 21% of the remaining 29%, leaving all other countries to squabble over the remaining 8%. 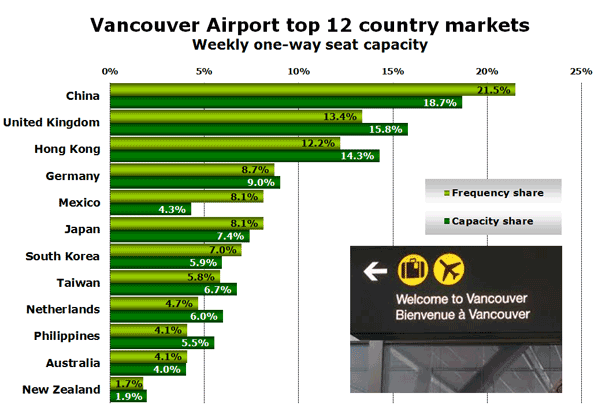 Although the US appears well covered, and this summer sees a couple of notable wins already under his belt in that market (Delta Air Lines operating daily on New York JFK, and United Airlines operating twice-weekly on Washington Dulles), Korenic insists that there are still gaps he would like filled: “California markets outside of San Francisco and Los Angeles, U.S. southeast, and several markets in the U.S. northeast.” US airlines take note.