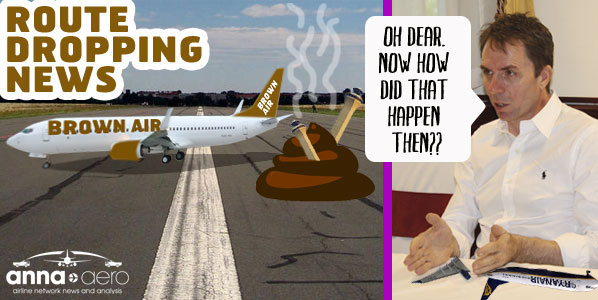 Wizz Air will have dropped 25 routes in the August 2012-August 2013 period, some in direct response to Ryanair competition, especially at Cork, and in Poland. However, system-wide Wizz capacity will grow 9% this summer, thanks to the launch of over 60 new routes across the airline’s 16 bases in Central and Eastern Europe.

Next year, Budapest (and Geneva) headquartered Wizz Air will celebrate its tenth anniversary, but the airline still tends not to reveal much about its inner workings, especially when it comes to its financial performance. However, one thing that can be analysed is its network and how it continues to evolve. This week, anna.aero has compared published schedule data for August 2013, with August 2012, and can reveal that the carrier (including its Ukraine-based subsidiary Wizz Air Ukraine) will have dropped 25 routes, involving 26 airports, during that 12 month period.

Cork in Ireland has seen the biggest cuts, with Wizz Air axing all six of its routes to the airport. This was in direct response to Ryanair’s decision last autumn to go head-to-head with Wizz Air on four of the six routes, and also start Kraków flights to compete with Wizz Air’s Katowice service. In addition to these dropped routes, four other routes have shifted from Rome Fiumicino to Rome Ciampino (service to Cluj Napoca, Gdansk, Targu Mures and Timisoara), four more have shifted from Forli to nearby Bologna (service to Bucharest, Cluj Napoca, Sofia and Timisoara), while Glasgow Prestwick services to Gdańsk and Warsaw have switched to Glasgow International Airport. Wizz Air is also likely to be considering relocating its 17 routes from Warsaw Chopin back to Warsaw Modlin later this summer (as and when the airport is once more fully operational), including the Glasgow service.

Despite the closure of 25 routes, according to the latest available schedule data, Wizz Air’s capacity (including Wizz Air Ukraine) is set to grow by around 9% this summer, thanks in no small measure to the launch of over 60 new routes, across the airline’s 16 designated bases in Central and Eastern Europe. Closer analysis of the individual bases reveals that just 10 of the 16 are growing this summer. Three of the airline’s four Romanian bases are growing, as opposed to just one of the airline’s five Polish bases. This appears to be in response to increased pressure from Ryanair in the Polish market, whereas Romania is currently almost completely unserved by the Irish LCC. 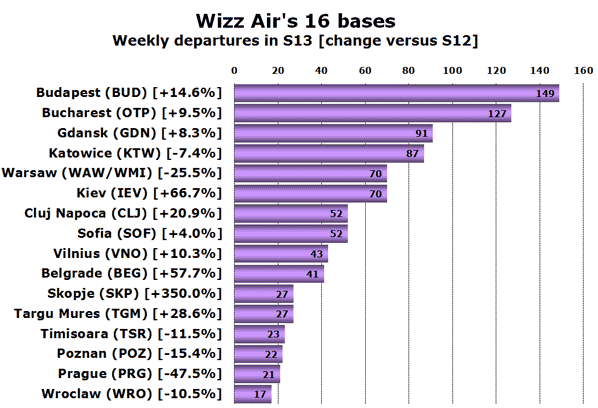 Other growth markets for Wizz Air are Hungary (where Ryanair has retreated somewhat), as well as Macedonia, Serbia and Ukraine, all markets where Ryanair has yet to establish a presence. While Budapest is still Wizz Air’s leading base, it is not the airline’s busiest airport. This continues to be London Luton Airport, from where Wizz Air operates over 170 weekly departures to 24 destinations this summer.