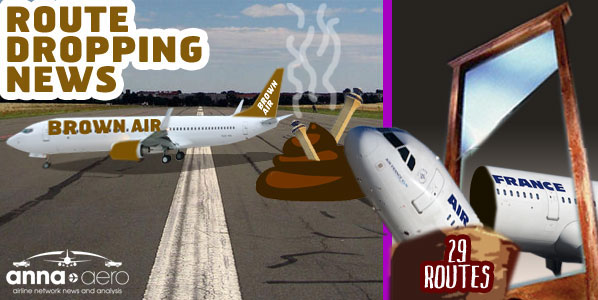 Air France has completely abandoned 29 routes: By handing over many of its regional routes to HOP!, and other routes to KLM, and its low-cost subsidiary, transavia.com France, Air France appears to have shrunk considerably. However, if these services are still included in the “Air France” total, the decline in Air France-related flights is less than 5% during the peak summer season.

This week we take a closer look at which routes Air France has deemed surplus to requirements during the last 12 months. This is not as easy as it sounds, as the airline has recently created HOP!, a new regional subsidiary that merges the operations of Airlinair, Brit Air and Régional, into a single, more cohesive brand identity. Most of HOP!’s routes were previously operated with Air France (AF) as the “marketing airline”, but are now operated under HOP!’s own code (A5), with Air France codesharing. In some other cases, Air France has transferred routes (such as Lyon – Tunis and Nantes – Ajaccio) to its low-cost subsidiary transavia.com France (TO).

Taking these factors into account, anna.aero has identified 29 routes, previously operated with an AF code, which now appear to have been axed from the Air France Group network. These include a couple previously operated by Air France subsidiary CityJet, which is not part of HOP!, and which is currently for sale. Most of the routes are intra-European, but a few long-haul destinations such as Jeddah and Orlando have also been targeted for cuts.

It is also worth noting that some of the European routes were, in effect, handed over to partner airlines, such as Lyon – Amsterdam (to KLM), as well as Paris Orly – Figari, and Marseille – Milan Malpensa (both to Air Corsica).

The biggest route to be completely dropped is that between Paris CDG and Strasbourg, which last operated on 1 April this year. Despite this route representing 13% of Strasbourg’s traffic in 2012, the latest traffic figures from the airport (for April) show that passenger numbers are up 15%, thanks primarily to a 42% increase in passengers to other French airports.

The creation of HOP! at the start of the summer 2013 season, with its own website (www.hop.fr) and booking tool, has created some apparent anomalies when analysing airline schedule data. By ‘handing over’ many of its regional routes to HOP!, Air France appears to have shrunk considerably. However, once HOP! services, and those of Air France’s own low-cost subsidiary transavia.com France are included, the decline in Air France related flights is down less than 5% during the peak summer season, while seat capacity is down less than 4%. Meanwhile ASKs (Available Seat-Kilometres) are actually up almost 1%.

The rapid growth of transavia.com France’s capacity this summer, reflects the airline’s wider route network, which now includes serving leisure destinations from not just Paris Orly, but also Lille, Lyon and Nantes. But transavia.com France’s network has seen its own cuts, with the termination of flights from Paris Orly to Fuerteventura, Granada, Izmir, Palma de Mallorca and Tenerife Sur.