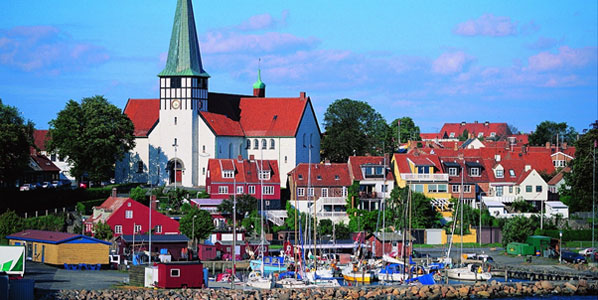 With a population of just over 40,000, the island of Bornholm, located in the Baltic Sea, south of Sweden and north of Poland, provides fast-growing Danish Air Transport with its largest scheduled route, linking Rønne, the island’s biggest population centre, to the Danish capital Copenhagen, with up to eight daily flights operated by ATR-42s.

Born in 1989, and created by husband and wife team Jesper and Kirsten Rungholm, who still run the business along with MD Lars Høeg (who joined in 2003, and is now a co-owner), Danish Air Transport (DAT) has until recently flown largely under the radar as predominantly an ACMI specialist. However, the failure of Cimber Sterling last May, as detailed by anna.aero last week in its Denmark country profile, thrust it further into the scheduled market, particularly within its home market of Denmark, resulting in the airline offering 24% more scheduled seats in June 2013 than it did in April 2012. 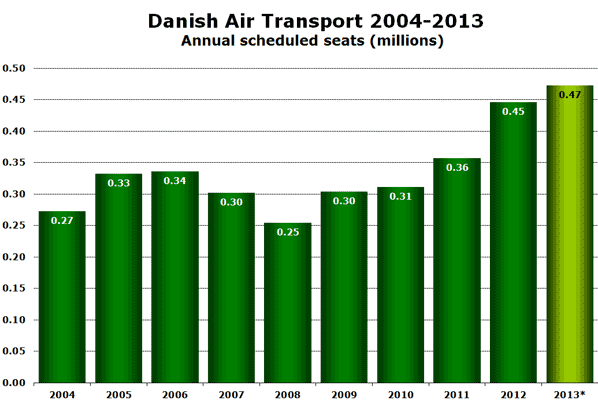 Source: Innovata. *projected seats as at 28 May.

Since the low of 0.25 million annual available seats recorded in 2008, this year is projected to be nearly twice as large for DAT. Denmark’s share of the airline’s scheduled flying is worthy of note over this timeframe — having been as low as 4% in 2004, by 2012 the annual figure had risen to 34%, however this year’s total is expected to double at nearly 67%.

Up until Cimber Sterling’s demise in May last year, nearly 90% of DAT’s scheduled flying was actually flown domestically in Norway (according to Innovata data April 1-7 2012). Today, the carrier’s two biggest routes in terms of weekly seats are in the Danish domestic market, between Copenhagen and Bornholm (an island in the Baltic Sea) and Sønderborg (in southern Denmark), and both were commenced on 4 June 2012, within weeks of Cimber Sterling’s collapse. 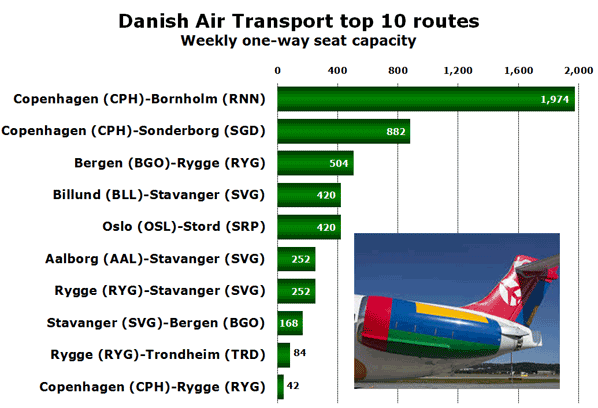