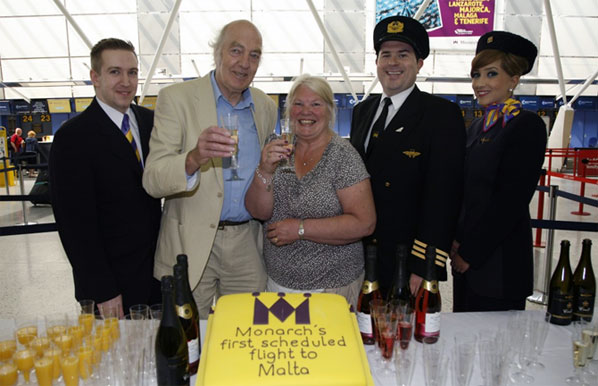 One of East Midlands Airport's newest scheduled carriers is Monarch Airlines. Earlier this month it launched twice-weekly flights to Malta, which was great news for Nottingham couple Janet and Henry Pavier, who first visited Malta for their honeymoon 40 years ago. To celebrate their Ruby wedding anniversary in style, the couple returned to the island on Monarch’s inaugural flight, which was also celebrated with a splendid cake.

East Midlands Airport in the UK has been at the centre of low-cost airline developments for over a decade. Up until 2002 it had been a typical UK regional airport, growing modestly but not rapidly. When British Airways’ LCC go announced that it was going to make the airport its third UK base (after London Stansted and Bristol) at least one other carrier took more than a passing interest. British Midland, with its corporate headquarters at nearby Donington Hall, responded immediately by creating and launching a low-cost subsidiary, bmibaby. Both carriers started operations there in early 2002, and by the end of 2003 passenger numbers had grown by 80% in just two years. Ryanair established a base at East Midlands in 2006, while easyJet, having taken over go in late 2002, chose not to develop the base and eventually ceased all operations at the airport in early 2010. 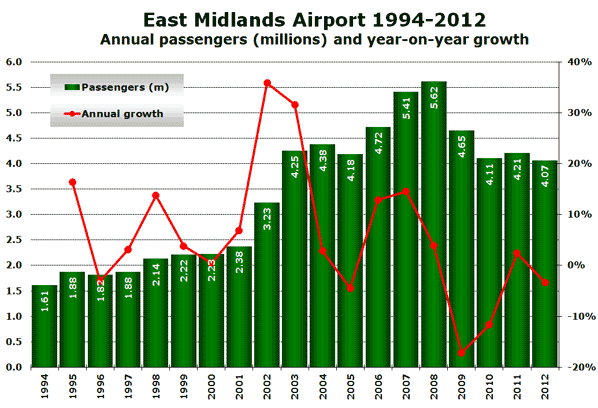 bmibaby’s operations fluctuated somewhat during the last decade, though in terms of weekly departures the airline’s presence peaked way back in 2003. Somewhat ironically, last summer saw bmibaby offer its widest ever network, with 28 destinations served, but after its parent company was sold to IAG, routes were terminated, some in June, others in September. Despite these cutback, the airport’s passenger figures for last year do not show major dips after bmibaby closed down, as other carriers rapidly established services and increased frequencies. 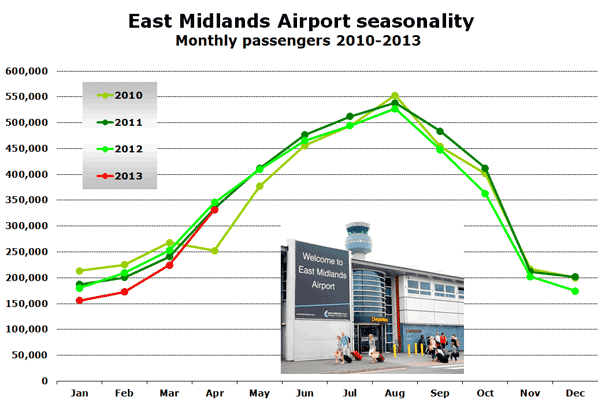 From last June, when bmibaby first started to close its route network, East Midlands Airport (which, like London Stansted, is part of the Manchester Airports Group), has seen the introduction of 28 new services and the development of scheduled services by two new carriers to the airport, flybe and Monarch Airlines.

The last week has been busy with the launch of new services by Jet2.com and Monarch Airlines. In addition the new, independent bmi regional has taken over the routes to Brussels and Frankfurt that were previously flown by the ‘old’ bmi regional. Many of these routes are seasonal operations resulting in East Midlands having a high SVID score of 16.3 (“poor”), compared with its busier neighbours of Birmingham Airport (7.3, “good”), and London Luton Airport (5.1, “good”).

As a result of all these developments, Ryanair remains the airport’s single biggest airline customer, accounting for almost half of all scheduled seats, and serving 40 international destinations this summer. Jet2.com just beats Thomson Airways for second place with more flights and seats, but fewer destinations. What is notable is that none of the airport’s airline customers are from mainland Europe, though Sterling tried LCC services from Scandinavia back in late 2007 and early 2008. This winter will see a couple of additional new services with Jet2.com having already revealed plans to serve Budapest and Prague, neither of which is served this summer, though Ryanair has previously served the Budapest market, while Prague services have been offered in the past by bmibaby, easyJet and Ryanair.

Right next door to the airport is the famous Donington Park racetrack, which hosted the F1 European Grand Prix in 1993, won by Ayrton Senna in a McLaren in appalling weather conditions. The track has also hosted a variety of other high-profile motor sport events over the years, including MotoGP and World Touring Cars. Next to the circuit is The Donington Grand Prix Collection, which claims to be the largest showcase of Grand Prix cars anywhere in the world, with the largest collection of McLaren and Williams F1 cars outside of their respective factories. 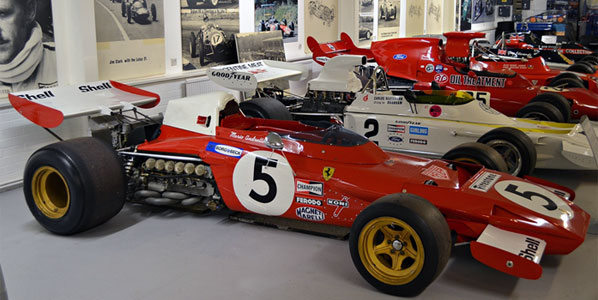 The Donington Grand Prix Collection, located just minutes from East Midlands Airport, houses the world's largest collection of Grand Prix cars going right back to the 1950s. Fans of McLaren and Williams will have most to get excited about, but the collection has at least one car of just about every major F1 manufacturer of recent years.