Mesa Airlines affected by changes to the network philosophy of US majors; Capacity cuts give better LFs 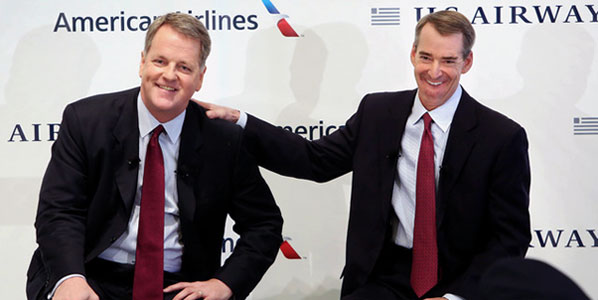 When the US Airways/American Airlines merger deal goes through, Mesa Airlines’ business is bound to change – yet again. Mesa Air Group's CEO, Jonathan Ornstein, is however positive about the future: "Anything that's going to strengthen US Airways' position, which this merger certainly will, is going to be a positive for Mesa Airlines and our people. I think the fact that having a stronger company that has better reach and more routes and more network, it's all positive for us.”

Following our March analysis of SkyWest Airlines, anna.aero takes a closer look at another of the country’s largest regional airlines and major contract flyer – the Phoenix-based Mesa Airlines. With its operating certificate issued back in 1979, Mesa has an excellent safety record, noted as having the fewest incidents out of all US domestic operators. In April 2013, it was also named as #1 regional airline for customer service (US DoT Air Travel Consumer Report). A large chunk of the airline’s business comes from regional contract flying for the US majors, most recently under the brands of United Express and US Airways Express. Mesa is also the operator behind the go! brand, providing inter-island air services in Hawaii. In January 2010, the carrier filed for Chapter 11, in order to better cope with its fleet-related financial obligations, but emerged from it within 13 months, putting many other US carriers to shame.

Annual capacity data published by the US DoT shows that while Mesa suffered briefly in the period after 9/11, rapid growth occurred between 2003 and 2005, following the recovery of some of the contracts with United Airlines the airline previously had, as well as new business from Delta Air Lines. In the same period, Mesa also continued to develop its relationship with US Airways and AmericaWest (before the merger with the former in 2005). 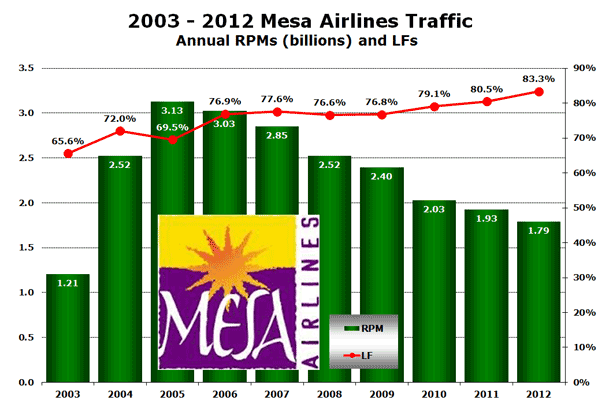 Despite these partnerships, the market became tougher in the mid-2000s for Mesa. Firstly,  AmericaWest swallowed US Airways (retaining the latter’s brand), forcing the regional airline to reduce its fleet of 50-seater jets. Then Delta and United undertook a major remodelling of their respective networks in the aftermath of the 2007 downturn, and as a consequence Mesa lost all business coming from these particular majors. Interestingly, analysis of the airline’s load factors indicates that capacity reduction was beneficial with this indicator increasing by nearly 20% in the last decade. 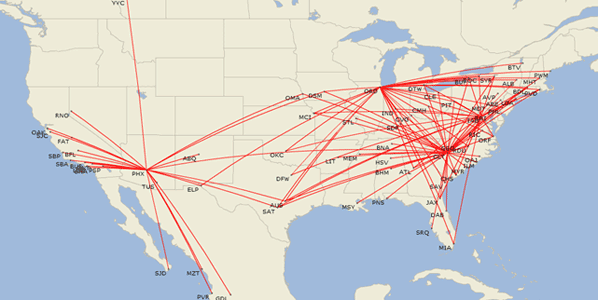 While its name might sound somewhat obscure to the wider flying public, Mesa Airlines has been around since 1979, drawing most of its business from regional contract flying for US majors.

US Airways has 72% of Mesa’s seats

Analysis of capacity data provided by Innovata reveals that in June 2013 Mesa will dedicate as much as 72% of its capacity to US Airways, for which it flies under the US Airways Express brand. United is the second-largest airline partner, taking up further 22% of Mesa’s weekly seats in June 2013.

Charlotte twice as large as #2 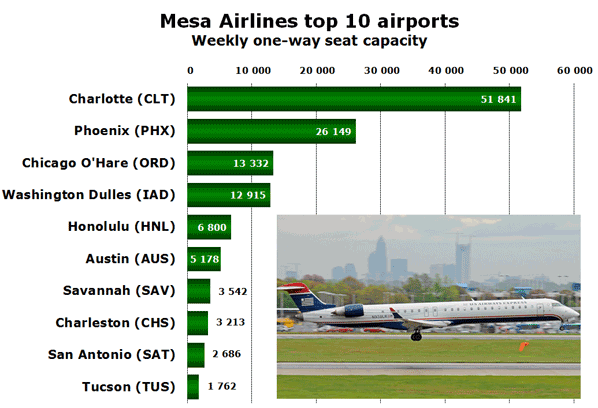 In practice, the strong relationship with US Airways has turned Charlotte and Phoenix into Mesa’s top airports across its network in terms of weekly seat capacity. Notably, the carrier’s operation in Charlotte will have grown by 17% in June 2013 when compared to the same period a year before, and – at 660 weekly departures – makes the North Carolina airport twice as large as Phoenix, and more than three times the size of its Chicago O’Hare operation (where it flies for United).