While Qatar Airways and ANA are examples of carriers returning to Myanmar, Condor made the history last December when it launched the first and only nonstop service from Europe (regrettably, Condor pulled out from the market with the end of winter season).

The improving political climate in Myanmar following last year’s elections won by the National League for Democracy and the gradual loosening of access restrictions for international investors has created considerable opportunities for the development of new air services. In fact, Myanmar – a country with a population of 60 million – was recognised as the most underserved aviation market in the ASEAN region last year, yet offering virtually no restrictions to growth. The change is already underway and according to data provided by the country’s Department of Civil Aviation, between 2007 and 2011, Myanmar’s two main airports – Yangon and Mandalay – grew their traffic by 47% and 53% respectively.

Examination of historic seat capacity data (OAG Schedules iNET) shows that, while the trend was fairly uneven between 2004 and 2011, Myanmar has become increasingly attractive for route development specialists. In fact, planned June 2013 capacity will result in 90% growth as compared to the same month ten years earlier, including an impressive +250% in the international segment. 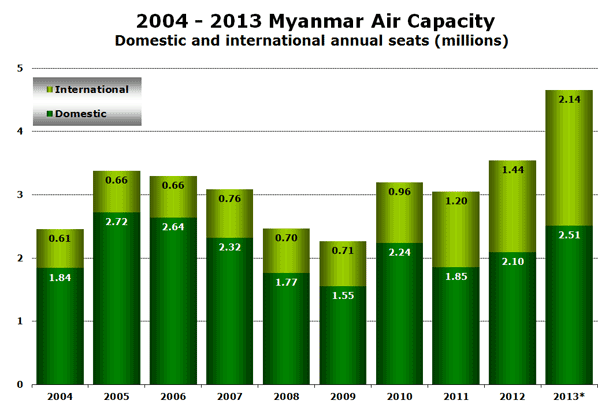 Capacity growth has visibly accelerated in the recent years owing to the strong interest in the development of international services. Overall capacity grew 41% between 2009 and 2010, then decreased marginally (-5%) in the following year, before it then achieved double-digit growth in 2012 (+16%), and is expected to be double that for 2013 (+32%). International capacity increased at an average annual rate of 32% in the same timeframe. The poor result of 2011 was entirely as a consequence of lower domestic supply of seats (-17.4%), but since then, and indeed looking forward to anticipated 2013 full-year figures, this segment is positioned again for significant growth.

Thai Airways has the most capacity; Myanmar Airways International – the most frequencies

Thai Airways (together with its subsidiary, Thai Smile) leads the list of largest international seats providers in Myanmar, having grown its offering, as measured in monthly seat capacity, by 65% this June compared to the year before. The airline commands 16.7% of seats and 11.1% of frequencies, offering thrice-daily services from Bangkok to Yangon and five-weekly to Mandalay. However, Myanmar Airways International steals #1 position in terms of frequencies (16.3% market share), despite the fact its seat share decreased from 23% in June 2012 to 14.2% this year. 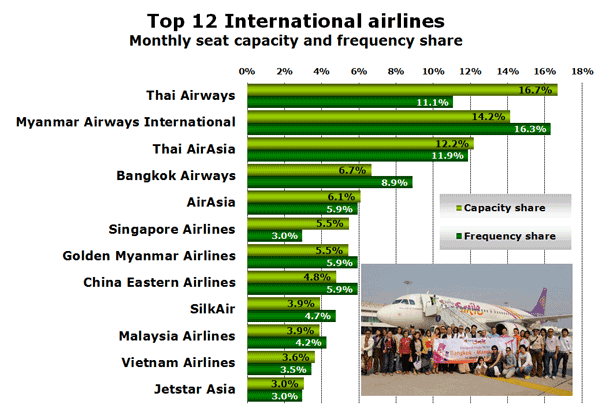 While Myanmar Airways’ decline can be partly explained by the increased capacity from dynamic incumbent carriers such as AirAsia and Thai AirAsia (each has doubled its capacity to Myanmar in the course of last year, and together have 18.3% of the market), a total of seven new airlines have launched operations in Myanmar over the last 12 months, significantly affecting the shape of the market.

43% seats allocated on routes to Bangkok

Services from Myanmar’s two international airports to both Bangkok airports – Suvarnabhumi (63 weekly flights from Yangon, and five weekly from Mandalay) and Don Mueang (thrice-daily and daily respectively) – make the Thai capital the largest international market from Myanmar. Interestingly, Bangkok Don Mueang is a new destination from Myanmar following Thai AirAsia’s switch of Bangkok airports in late 2012. In #2 position, Singapore, commands less than a half of the seat capacity allocated to Bangkok.

While a number of high profile international routes have been launched to Myanmar in the course of last year, including Qatar Airways’ service to Doha and ANA’s to Tokyo Narita, only Korean Air’s schedule from Yangon to Seoul Incheon made it onto the list of top destinations. Having launched the route in early October last year with thrice-weekly frequencies, the South Korean carrier has since increased the operation to daily.

In spite of having its ups and downs, Myanmar’s domestic market will have grown almost 20% in June 2013 compared to the same month in 2012. The privately-owned Air KBZ is the largest provider of domestic capacity, and commands 40% of weekly seats this June, according to OAG Schedules iNET data. Air Mandalay and Asian Wings Airways each have around 22% of weekly seats. However, the latter is the country’s fastest growing domestic carrier, as it grew by 135% in terms of seat capacity since last June. 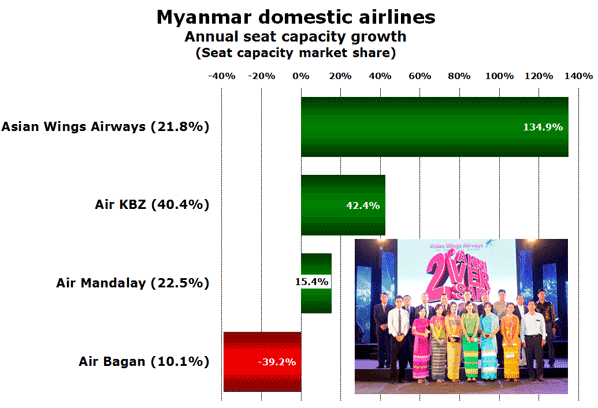 In comparison, Air KBZ and Air Mandalay achieved growth of 42% and 23% in the same period. Air Bagan is the only domestic carrier to reduce capacity and offers 39% less seats and 29% less frequencies this June than in the same period the year before. Myanmar Airlines International, which this week entered the domestic market from Yangon to Mandalay, is the new entrant to the domestic market. However, the impact of its thrice-weekly service is marginal.