Russia’s leading airports reported impressive growth in 2012. Moscow Domodedovo Airport remained the country’s leading airport, handling 28.2 million passengers, an increase of 9.6% on 2011. Closing the gap in second place was Moscow Sheremetyevo Airport, where passenger numbers increased 16.5% to reach just over 26 million. In third place, St Petersburg Pulkovo Airport grew by 16.1% to almost 11.2 million passengers, while Moscow Vnukovo Airport was the fastest-growing of the top four, with an 18.3% increase in demand to 9.7 million. These four airports alone account for around 60% of all Russian airport traffic. 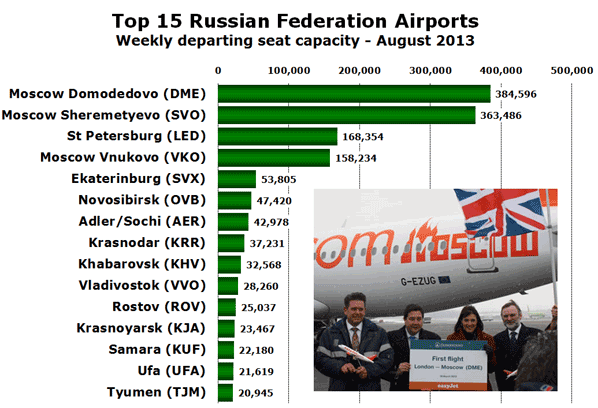 The airports ranked fifth to fifteenth by weekly seat capacity, if combined, are still smaller than either of Moscow’s two leading airports.

According to airline schedule data for this August (the busiest month at Russian airports), seat capacity across the nation’s airports is estimated to be up around 9.4%. Examining the performance of the 15 busiest airports for scheduled services reveals that Vnukovo is once again the fastest-growing of the big four airports. 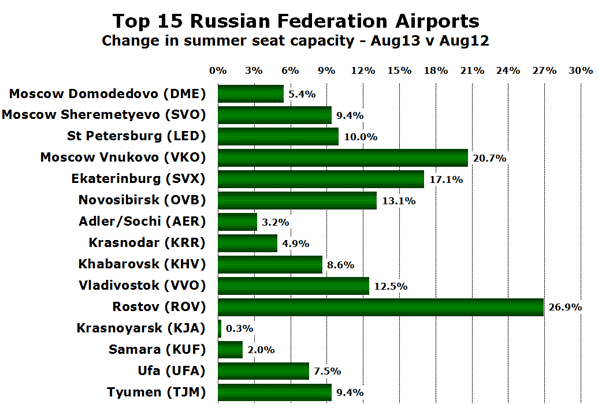 Among the top 15 airports, Vnukovo’s capacity growth rate of 20.1% is beaten only by Rostov, where the number of weekly seats is up just under 27%. All of the top 15 report year-on-year capacity growth. Although Domodedovo retains its lead ahead of Sheremetyevo in terms of both weekly departing flights, and weekly seat capacity, if sector length flown is taken into account, Sheremetyevo has overtaken Domodedovo since last summer to be the leading Russian airport in terms of weekly ASKs (not that this is a measure normally used to compare airports).

Setting anna.aero’s data elves the task of revealing some interesting statistics about what has actually happened in the first three to four months of 2013, unearthed the following facts:

Back in March, easyJet launched its first ever flights to Russia, by introducing services to Domodedovo from both London Gatwick Airport and Manchester Airport. The airline is one of several non-Russian/CIS carriers to launch new international routes to Russian airports so far in 2013.

Other new services slated to start before the end of the year, are additional new routes from Aegean Airlines, Air One and flydubai (to Krasnodar, Rostov, and Volgograd), as well as new services from Icelandair (to St Petersburg from the beginning of June), and SWISS (Geneva to St Petersburg starting in mid-July).