AirAsia Group still growing at 20% but drops 11 routes; most new routes in Indonesia, Zest Air merger in the Philippines 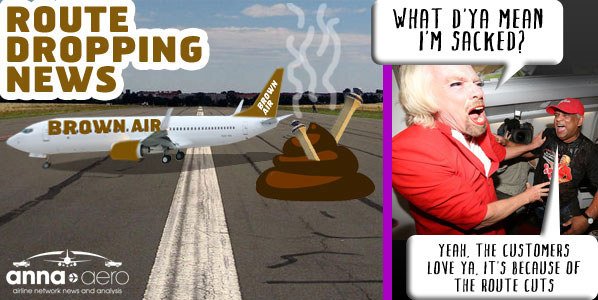 In reality Tony Fernandes was making up an excuse to get rid of this ugly stewardess. While anna.aero has identified 11 underperforming routes axed from across the AirAsia system, it also launched 28 entirely new routes during the same period analysed.

Some airline bosses, it seems, should stick to running airlines. AirAsia’s CEO Tony Fernandes has been struggling to succeed with his ‘extra-curricular’ sporting adventures. His London football team, Queens Park Rangers, was recently relegated from the English Premier League, while his Caterham F1 Grand Prix team is currently ranked 11th (out of 11) in this year’s F1 championship. Fortunately, AirAsia continues to report solid profits, even while growing significantly, and entering new country markets such as Japan.

According to the latest financial report for the first quarter of 2013, the airline’s passenger numbers are up 19% to almost 9.8 million, with the ‘original’ Malaysia-based AirAsia now accounting for around 55% of the total. The fleet has grown 22% to 122 aircraft during the last year, with the network load factor hovering just below 80%, boosted by an impressive 87% reported by Thai AirAsia.

Looking ahead to the peak summer period, capacity across the five airlines is up by almost 18%. In the Philippines the airline has invested in local carrier Zest Air and since early May 2013 has been integrating its own carrier, Philippines’ AirAsia, into it. Zest Air currently operates 11 aircraft of which 10 are based in capacity-constrained Manila. AirAsia plans to improve Zest Air’s utilisation of its slots at Manila (currently 76%), and push up utilisation from seven hours per day to 12 hours.

The biggest single network change in the last 12 months was probably the shift of all AirAsia’s operations from the newer Bangkok Suvarnabhumi Airport (BKK) to the older Bangkok Don Mueang Airport (DMK) which took place last October. In addition to those shifts in operation, anna.aero has identified a further 11 routes which are no longer operated at all, split across four of the group’s airlines.

However, during the same period these carriers (plus AirAsia Japan) have launched, according to anna.aero analysis, 28 new routes, of which 14 have been started by Indonesia AirAsia.