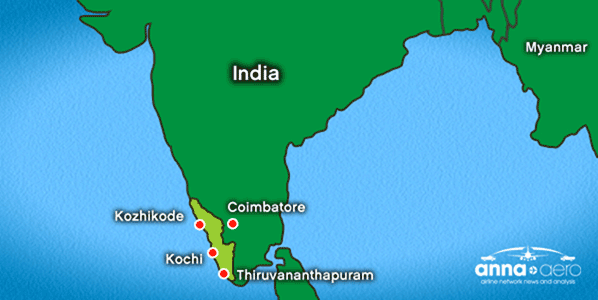 Serving the city of Kochi, the most densely populated city in the state of Kerala with its metro region boasting a population of over 2 million, Cochin International Airport is bucking the current dip in Indian airport passengers numbers. With the 46 airports that submit their respective traffic results to the Airports Authority of India (AAI) website posting cummulative negative growth of 2% in the 12 months up to March 2013, the fact that Cochin has delivered a 3.5% increase in its passenger numbers over the same period up to 4.9 million, is a postive sign not being ignored by the region’s airlines. With Q1 2013 statistics boasting growth of 9%, Cochin looks set to break five million annual passengers for the first time this year.

With nearly 100% growth in seats and flights over the last year, Indian LCCs SpiceJet and IndiGo are putting pressure on Jet Airways’ #1 position in terms of weekly flights, and indeed surpass India’s second biggest airline with regards tof weekly seats at Cochin. Jet Airways’ battle to hold top spot is not helped by the fact that it has marginally reduced its own capacity at the Kerala airport. Growth from the two LCCs has ousted Air India from second place, although if its own LCC Air India Express is considered along with its parent, the state-owned flag carrier would have been #1 in June 2012 and this year too. 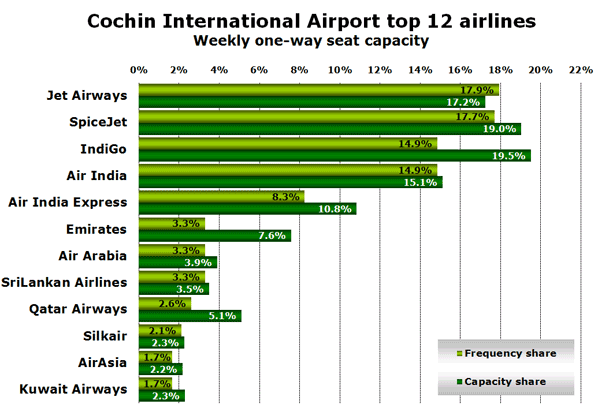 While all of the MEB3 – Emirates, Etihad Airways and Qatar Airways – all serve the airport, only the Abu-Dhabi based carrier has failed to grow at Cochin, reducing its weekly seats by 23% (mix of A330 and A320 operation switched to all-A320), but maintaining its daily connection to its hub. Emirates’ 5% annual growth comes as a result of increased use of its larger 777-200s and -300s instead of its A330s on its double-daily operation, whereas over in Doha, the capacity increase is more significant (+58%), with all 11 weekly flights switching from narrow- to wide-body equipment over the last 12 months.

Fast-growing Dubai up to #2

Etihad’s capacity retrenchment on Abu Dhabi is more than likely instigated following Jet Airways inaugurating a daily operation from Cochin in the past 12 months, which has actually resulted in seats to the UAE capital being up by 25% year-on-year. However, the annual growth crown goes to fellow Middle Eastern hub Dubai, which has seen seats offered nearly double, following the introduction of daily flights with Air India Express, IndiGo and SpiceJet, securing it second spot in the process, having been fourth last June. 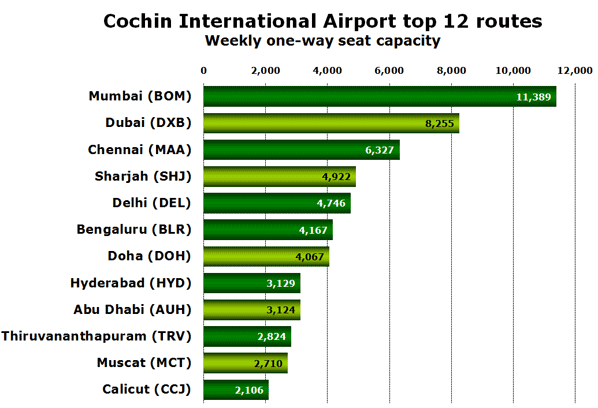 Although not in the top 12, the airport has added four new destinations in the last 12 months, Pune (SpiceJet, six weekly) and Mangalore (Air India Express, thrice-weekly) in the domestic market, as well as Male in the Maldives (SpiceJet, daily) and Salalah in Oman (Air India Express, weekly). Just outside the top 12, are the airport’s only other two routes outside of the domestic market and the Gulf region, being Singapore at #13 and Kuala Lumpur at #16.

Entering Cochin’s monthly passenger data for 2012 into anna.aero’s Seasonal Variation in Demand (SVID) calculator, the airport performs admirably, generating a score of 1.14, giving it an “excellent” rating (better than Vancouver). Cochin’s 2012 creditable score also compares favourably to other nearby Indian airports, being marginally better than that scored by Coimbatore, just 120 kilometres northeast (1.54 – excellent and better than Stockholm Arlanda), but not as good as Thiruvananthapuram, located nearly 200 kilometres south, which posted a result of 0.74 (better than Tokyo Narita), but still “excellent”.