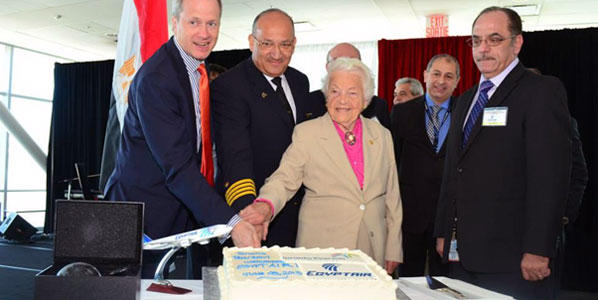 Having celebrated its 81st anniversary in May, Egyptair clearly belongs to the world’s oldest airlines club. While the last couple of years have been full of turbulence, the airline hopes that network growth will help it out of trouble. anna.aero has the full report of Egyptair’s route launches last week – including this cake celebration in Toronto.

More than two years after the January 2011 revolution, Egyptair continues to incur massive losses as it struggles to recover from the effects of the popular uprising, when it was forced to temporarily ground up to 40% of its fleet. With the political situation in the country returning to normality, this has helped the travel industry onto a recovery path (tourist arrivals were up 17% in 2012, according to Egypt’s statistics bureau) – a real game changer for the country’s national carrier. However, burdened with almost thrice as many employees as it could reasonably need to operate its fleet of 80 aircraft, Egyptair is focusing on the growth of its network to mitigate high overheads.

6% capacity drop in 2011 more than recovered a year later

Examination of annual seat capacity data provided by Innovata shows a long-term growth trend for Egyptair, with the carrier’s annual capacity virtually doubling since 2005. Double-digit capacity growth in the three years before 2008 was then followed by a slowdown in the next two years. It was only in 2011 however, that the carrier saw itself forced to reduce its capacity owing to security issues in the home market. In 2012, 11% more seats were already on sale than in 2011, and in the current year, growth projections to date show a modest 3.8% increase in capacity. 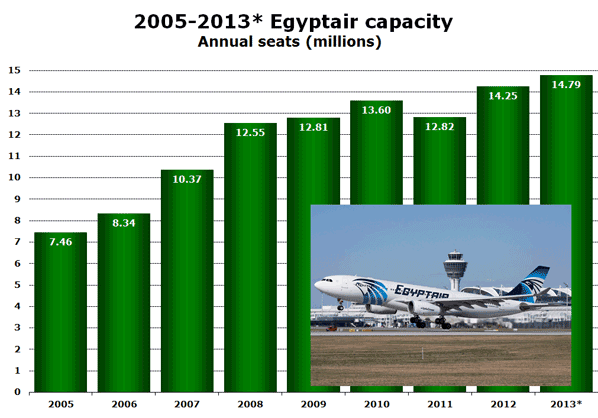 Saudi Arabian routes command a fifth of seats in Cairo

According to Innovata’s capacity figures, Egyptair only dedicates around 8% of its capacity to domestic flying at its main airport in Cairo. It currently offers services to nine domestic airports, with Hurghada (63 weekly flights in the w/c 10 June 2013), Luxor (59) and Sharm El Sheikh (76) being the top three domestic destinations in terms of seats offered.

Saudi Arabia is the airline’s largest international market and – having grown by a quarter in the last year – now commands 18.8% of the carrier’s capacity out of Cairo. Five existing routes (to Jeddah, Medinah, Riyadh, Damman and Abha) to the country saw capacity enhancements in the course of last year, while daily-flights to Gassim were introduced on 1 June. 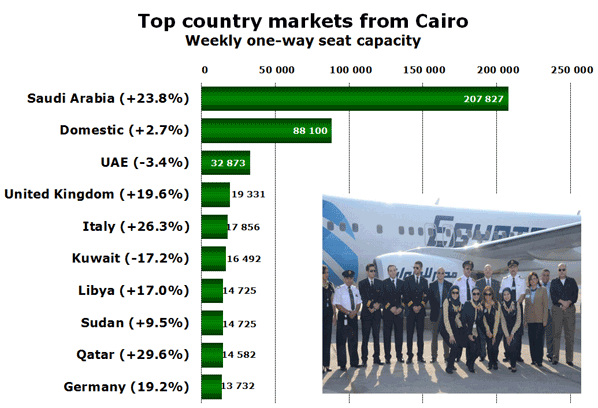 Egyptair dedicates much less capacity to serve its second-largest international country market, UAE, where it operates flights to Dubai, Abu Dhabi and Sharjah. In fact, UAE is one of the two country markets in the top 10 list to have seen capacity cuts from Egyptair in the period since July 2012 (the other being Kuwait).

Three European countries made it into the list of Egyptair’s core markets. The largest of those in terms of seat capacity offered by the Egyptian carrier, United Kingdom, saw the launch of Manchester as the second destination. Five-weekly flights to this northern British airport complement the existing twice-daily schedule to London Heathrow. In Italy, Egyptair increased its seat offering by a quarter on routes to both Rome Fiumicino and Milan Malpensa, This July, capacity to Munich remained unchanged, while a small decrease is noted on the route to Berlin Schoenefeld, as compared to the same period the year before, capacity to Frankfurt therefore drives Egyptair’s German expansion, with a 53% increase in seat supply to Cairo by the carrier.