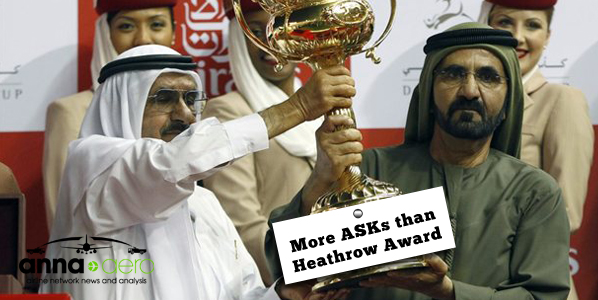 As the discussion and analysis regarding the future strategy for handling growing air traffic demand in London continues, anna.aero can reveal that London Heathrow Airport is still the world’s leading airport, if measured not by aircraft movements, or even passengers, but by ASKs (Available Seat Kilometres). While airlines regularly measure their performance and capacity in terms of ASKs flown (as it takes into account sector length), this is not a measure that has any real impact on airports, as once a passenger has left the airport, it is of little interest to the airport how far they travel.

However, using ASKs does give an indication of how many long-haul services are provided at the airport, and, based on analysis of Innovata schedule data for the period October 2012 to September 2013, London Heathrow leads the world, and probably has done for at least a couple of decades.

Dubai to pass Heathrow some time in 2014?

However, London Heathrow is now coming under attack from Dubai Airport, which has gained significantly in the last 12 months, narrowing the gap from almost 42 million annual departing ASKs for the year ending September 2012, to under 18 million annual ASKs for the ending September 2013. This suggest that some time in 2014 Dubai may pass Heathrow based on this metric. 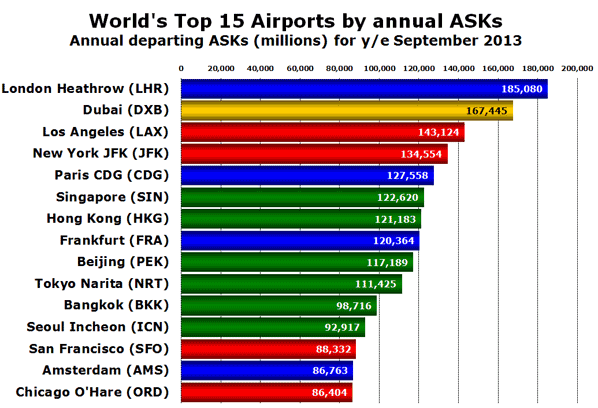 Heathrow’s only hope may be that the opening of Dubai World Central to scheduled flights later this year may slightly delay this, but it seems inevitable that, with the planned growth of Emirates, Dubai will become #1 sooner rather than later.