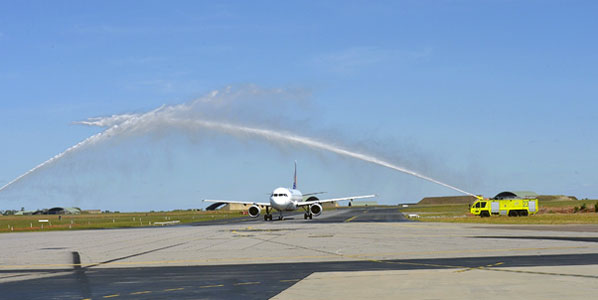 Launched on 1 June, Philippines Airlines has added three new points in Australia – namely Perth (four times weekly) and Brisbane (thrice-weekly) – all of which are operated via Darwin, where one of the airline’s A320s receives the new route water-arch treatment.

Over recent years, Philippines Airlines has been fortunate enough to be in the vanguard of one of the world’s fastest growing markets – indeed the number of ASKs operated to and from the Philippines market has nearly doubled since 2004 (Innovata year-ending June 2004 versus year ending June 2013). However, big growth statistics tend to encourage new entrants and the Southeast Asian country in the Western Pacific has been no stranger to those – with home-grown Cebu Pacific, SEAIR and Zest Air (currently merging with Philippines’ AirAsia) all taking on the beleaguered flag carrier from the mid-90s onwards. In Cebu Pacific’s case, the LCC is now larger at the country’s biggest airport — Manila’s Ninoy Aquino — in terms of annual flights and seats, than Philippines Airlines. Due to the latter’s long-haul network, it still holds the #1 spot with regards to ASKs (more than double the size on this metric), but with Cebu Pacific now also entering this market – it plans to launch daily A330-300 services to Abu Dhabi in October this year – even this position may soon be challenged. 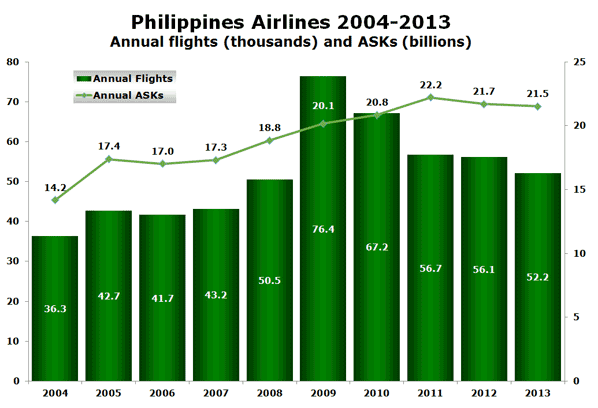 The carrier’s briskly paced growth in terms of annual flights between 2004 and its peak in 2009 was largely due to the building of its domestic network, which it doubled over these five years, only to reduce them back down to almost the 2004 levels over the next five years, ending this June. This is because Philippines Airlines’ solution to the onslaught of its domestic challengers has been to push more of its domestic and regional services to the airline’s low-cost regional brand PAL Express, while it uses its aircraft to seek out longer, more profitable sectors. Indeed, between year-ending June 2004 and year ending June 2013, the airline’s average sector length has increased 12% from 1,476 kilometres to 1,654 kilometres. The result of this strategy is that while Philippines Airlines’ annual flight tally for year-ending June 2013 is back down around 2008 levels, its ASKs have held reasonably firm around the 22 billion mark since 2011.

Unsurprisingly, Philippines Airlines’ top 12 biggest routes all involve Manila, with links between the island nation’s two largest airports of Manila and Cebu being top of the pile. Perhaps more surprisingly, the airline has reduced its capacity on the city pair by 10% year-on-year, and along with its operation to Seoul Incheon, represent the only destinations from the top dozen routes to have seen some capacity cuts in the last 12 months. However, the flag carrier has shifted almost every seat cut on this domestic route to PAL Express, which has grown its seats in the market by 25% since June 2012. With seats to the #2 market, Hong Kong, still growing, albeit marginally at just 3%, the two routes may well switch positions in the next five years if this trend continues. 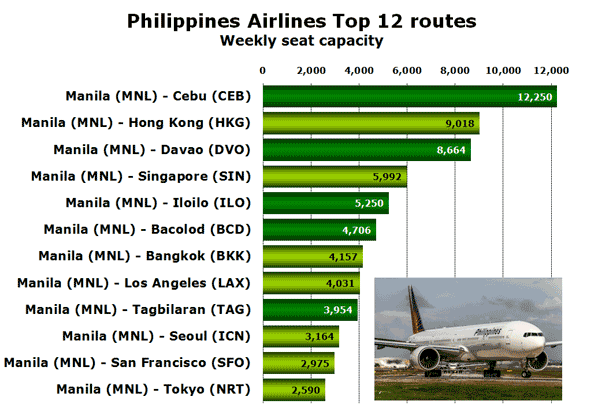 The airline’s strategy in the domestic is not clear-cut however, as the remaining four domestic routes in the top 12 have all seen capacity hikes in the region of 10-30% in the last 12 months. That said, two domestic routes which were in last year’s top 12 — namely Manila to Cagayan de Oro and Kalibo — have seen the same treatment as Cebu, with weekly capacity being switched to PAL Express, resulting in its seats increasing on these routes by 121% and 73% respectively. Of the regional routes listed, it is Singapore that has grown the most since last June – with a 16% increase coming as result of the airline using widebody aircraft (mix of A330 and A340s) on 50% of the four-daily operation this June in comparison to 25% a year ago.

Of course, the domestic market is still of vital importance to the carrier’s ongoing strategy, so while in terms of weekly seats domestic flying commands 69% of the airline’s total seats, or 74% of its total flights, the remaining 15 country markets generate the remaining quarter of the its network. For the purposes of this graph, and given its scale and scope, Philippines Airlines’ domestic flights have been excluded. 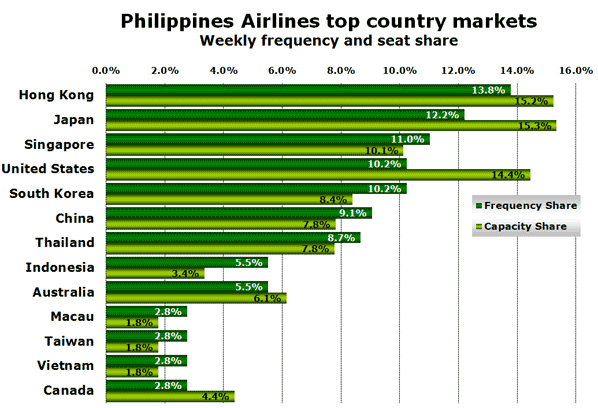 Capacity to Australia has shown the most significant growth over the last 12 months, with the existing four and three weekly flights to Melbourne and Sydney respectively being added to on 1 June by a further seven weekly flights operating to Perth (four weekly) and Brisbane (thrice-weekly), with all flights operating via Darwin. Services to Macau have grown by 75% in the same period (increasing to daily from four weekly), while Thailand (plus five weekly – all additional flying to Bangkok) and Indonesia (plus three weekly – two extra weekly flights to Jakarta and an additional single weekly operation to Denpasar) have benefitted capacity increases of 29% and 27%.