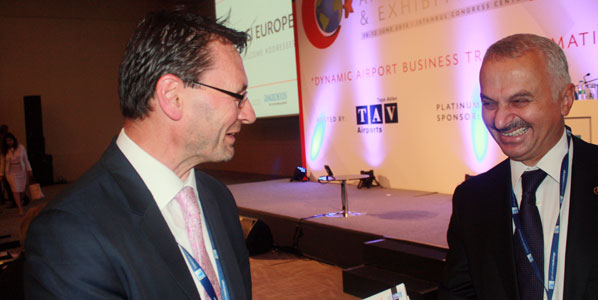 anna.aero: “So, despite all the reports, you are still secure in your job?”

Kotil: “Yes. That episode happened on a Friday, and was over on the Sunday.”

anna.aero: “We are about 300 metres from Taksim Square, what’s your view on the protests down the road, are you worried that there will be a real dip in traffic?”

Kotil: “Well it is an episode, but I don’t believe that it will affect the huge growth we are experiencing in the long term. I still hope to carry 50 million passengers this year.” 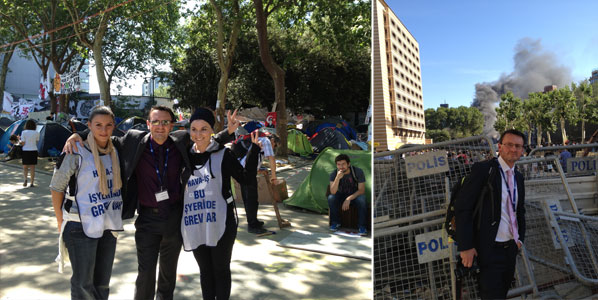 From our own correspondent: anna.aero met some of the protesters in Gezi Park this week including some striking Turkish Airline workers. Kotil has invited them to call him up directly and says he has even handed out his mobile phone number to all employees.

anna.aero: “We also met some Turkish Airlines people down at Gezi Park there – they said they didn’t like you very much.”

Kotil: “Well if they are unhappy about anything they should call me up. I have given my mobile number to all 18,000 employees. I’ve only had about 10 calls since then, so they can’t be representative of staff feeling about the big growth strategy.”

anna.aero: “OK, so returning to normal network expansion issues, is it true you want to beat Qantas to being the first operator of a non-stop Europe-Australian route.”

Kotil: “Well we are really missing from Australia – everyone is there except Turkish Airlines. We want to start a Kangaroo route in 2015, but we definitely won’t be buying the aircraft to do it non-stop, it will be via big hub, probably Singapore.”

anna.aero: “Your network strategy is now very well known – lots of short-haul feed from many airports in Europe which the competing Middle East hubs are too far away to serve – last month’s Friedrichshafen launch is a great example. Other than Australia, can you give us some more clues about the other new intercontinental routes these will link too?”

Kotil: “Africa excites me most. Travel is a very nice thing and it’s very lovely to visit Africa – even Mogadishu – I can tell you some very nice places to eat fish in Mogadishu.  It’s time the centre of gravity shifted in Africa’s favour.”

anna.aero: “As the end-user are you concerned about the high cost the winning bid for the new airport? [€8 billion to build, plus €22 billion in royalties over 25 years.]

Kotil: “We will have to pay for it, I know that, but with my 100 million passengers by 2020, we’ll be very profitable and with all our passengers, the new airport will have no problem making lots of profits – if we’re not making profits, then nobody will like us.” 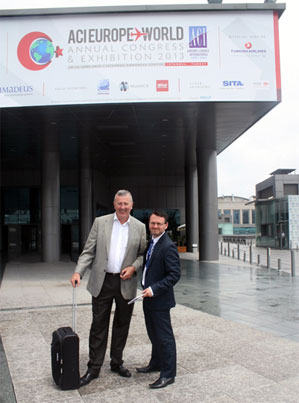 “Mr Cawley has left the building” announced a major airport owner/investor to the slightly chastened congress after the Ryanair COO and Deputy CEO was escorted from the premises.

Ryanair COO and Deputy CEO Michael Cawley flew into the ACI EUROPE-ACI World Congress in Istanbul to talk to 800 airport representatives, unfazed by the riots: “Turkish people don’t riot like anyone else, I admire their great respect for property – I haven’t seen any smashed shop windows so far.”

In contrast to the uneasy truce in the streets outside the venue, Cawley charged, all guns blazing, into the crowded room, alleging “the way to grow the business was by making travel cheaper – the network carriers are concentrating on a constituency of travellers who are shrinking – and indeed the only growth we have in Europe is in areas where we are cheapening the cost of travel. Cheaper travel drives economic development.” (Dr Kotil wouldn’t agree, but regrettably neither had an opportunity to meet, although, equally, when Kotil had claimed his airline would be the first European carrier to reach 100 million passengers in 2020, he had conveniently disqualified “Ryanair and easyJet” from being in this race, although they are more likely to get there first.)

Sadly, not all the financial advice offered by Mr Cawley to the airports community is re-printable here due to the risk of offending younger airport executives. “Mr Cawley has left the building” announced a major airport owner/investor to the slightly chastened congress after passing Cawley on an escalator (and exchanging genuine warm greeting and mutual praise).

So what does Ryanair think of Turkey itself? “Turkey has very interesting growth prospects, with vast untapped demand – but we have a need for open skies before we can come here in a few years’ time.”