The new Departures Terminal of Bucharest Henri Coandă International Airport was opened theatrically on 6 November 2012. Guests of honour included Mr Valeriu Zgonea, President of the Chamber of Deputies; Mr Victor Ponta, Prime Minister of Romania; Mr Ovidiu Silaghi, Minister of Transportation; Mr Mircea Dusa, Minister of Interior; as well as Mr Mario Cospito, Ambassador of Italy; and Mr Martin Harris, Ambassador of the United Kingdom. Last year passenger numbers at the airport grew by 40% to over seven million, thanks to the closing of Bucharest's only other major airport.

Henri Coandă International Airport, located less than 20 kilometres northwest of the city of Bucharest in the town of Otopeni (which gives the airport its IATA code of OTP), is by far Romania’s busiest airport, handling over seven million passengers in 2012. This is an increase of over 40% on the previous year, thanks to Bucharest’s other main airport, at Baneasa, closing to commercial airline traffic at the start of the summer 2012 season. As a result, all operations by low-cost carriers Blue Air and Wizz Air (which had previously helped Bucharest Baneasa Airport to support almost 2.4 million annual passengers), were relocated to the main airport. 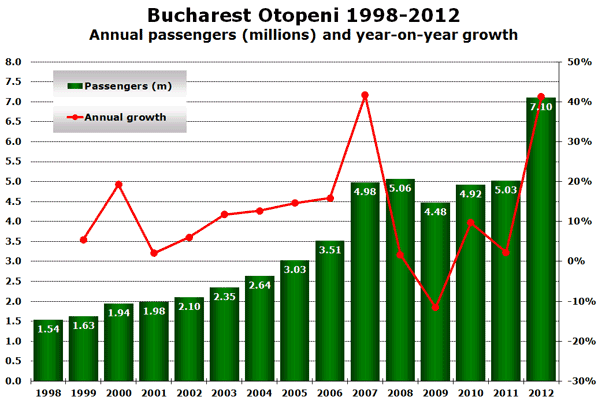 This sudden shift in capacity makes last year’s monthly figures unusable for the purposes of analysing the airport’s seasonality profile. However if we use the figures for 2011, we get a SVID value of 3.3 (“good”), which compares favourably with Budapest (5.0), and Prague (7.1), suggesting that the market has good all-year-round appeal. 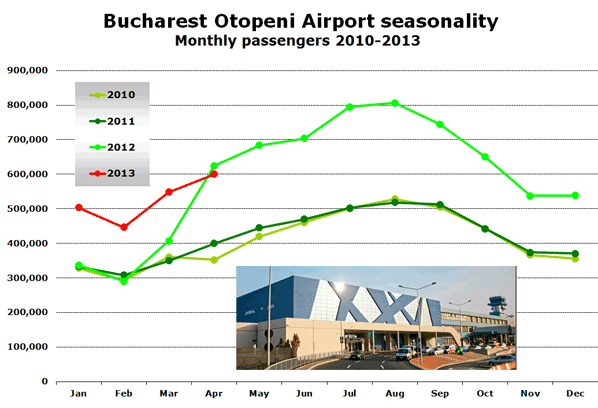 Analysis of schedule data for this August shows that TAROM, the national flag-carrier, is still the leading airline at the airport when measured by flights (38%) and seats (28%). TAROM’s network this summer will consist of 34 destinations served non-stop from the airport, with twice-weekly service to Dubai being the only route that could be considered long-haul. Domestic routes to Cluj Napoca (31), Iasi (31) and Timisoara (26) have the highest weekly frequencies, while the airline’s 12 weekly flights to London Heathrow generate the most ASKs of any single route.

Wizz Air (22%) and Blue Air (11%) rank second and third by weekly seats, with Wizz Air’s network of 29 international destinations generating more ASKs from the airport than TAROM’s network, though only London Luton (14) and Rome Ciampino (11) are served with more than seven weekly flights.

Since the beginning of 2012, the airport has welcomed many new services, though mostly from low-cost airlines. Wizz Air leads the way with the addition of 11 new routes in the last 18 months, and at the start of the winter season, will link the airport with Dubai World Central. flydubai already serves Dubai, having started operating three weekly flights from its base to Bucharest on 1 October 2012.

Apart from the new Dubai route, Wizz Air is also launching a new service to Tel Aviv in Israel from 15 June. Another LCC, Vueling of Spain, is introducing twice-weekly flights to both Bilbao and Madrid before the end of June, while in mid-October germanwings will be replacing Lufthansa on its Berlin route.