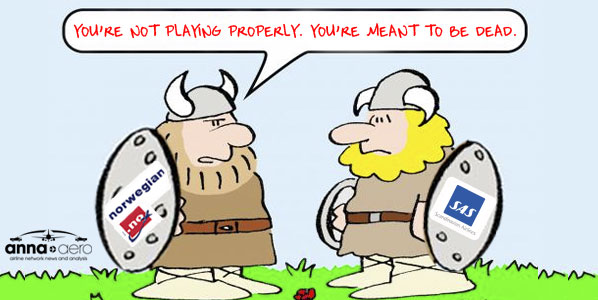 At the end of last year the very existence of SAS looked in doubt in the face of a surging Norwegian. But SAS is not rolling over and dying, increasing the number of flights marketed under its name by almost 14% this summer and, instead of axing routes in the face of economic woes, no routes that were operated at least daily last summer have been dropped.

Judging by the actions of its two biggest airlines, it would seem that the economies of Scandinavia are in rather more robust health than those in the rest of Europe. At the end of last year the very existence of the region’s biggest airline, SAS, was in doubt, but according to analysis of schedule data for this August, the tri-national airline will have increased the number of flights marketed under its name by almost 14%, and the number of seats offered by almost 10%. This can be explained, in part, by the decision to change the relationship with its Finnish subsidiary Blue1.

Blue1 used to operate and market its own flights but that is no longer the case. SAS now markets all flights operated by Blue1, although the aircraft will, for the moment at least, remain in Blue1 colours. Other flights are operated on behalf of SAS by Cimber Air (which was formed last May after the demise of Cimber Sterling) and Braathens Regional (which used to be known as Golden Air until the end of 2012).

Despite financial crisis, virtually no routes dropped by SAS

The response of many airlines in the past, when confronted by major financial woes, involved identifying the least profitable routes and cutting them from the network. However, SAS does not appear to have done this. Comparing the airline’s route network this summer with that operated last summer shows that no routes that were operated at least daily last summer have been dropped. The only routes operated with at least two weekly flights last summer that are missing from this summer’s schedule are Copenhagen to Lyon, Copenhagen to Katowice, and Oslo to Moscow Sheremetyevo. Conversely, SAS has launched many new routes from its three main bases, although several of these routes are seasonal.

Norwegian bigger than SAS in Oslo; gaining in Copenhagen and Stockholm

Last year SAS (including Blue1) carried around 25.7 million passengers, while Norwegian transported 17.7 million, an increase of 11%. At this rate it is quite likely that Norwegian will overtake SAS in terms of passengers carried within the next five years. As measured by seat capacity Norwegian is already bigger than SAS in Oslo, and is closing the gap at Copenhagen and Stockholm. At Copenhagen and Oslo weekly seat capacity for Norwegian is up more than 10% this summer, while at Stockholm Arlanda the number of seats on offer is up over 20%. 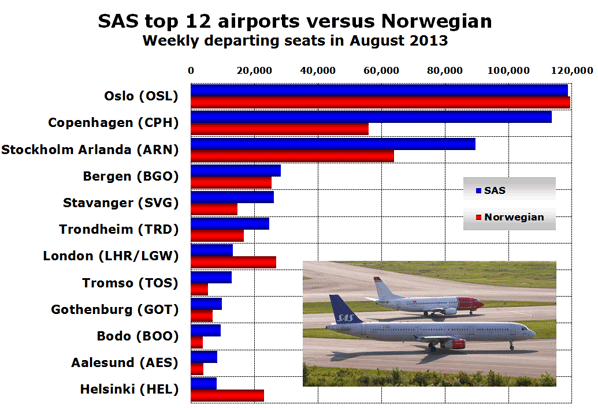 Analysis of which routes the two carriers serve with the highest number of weekly flights reveals that the top 12 routes are, maybe unsurprisingly, all within Scandinavia. Nine of the top 12 routes are domestic (six in Norway, two in Sweden and one in Denmark), with three international routes. 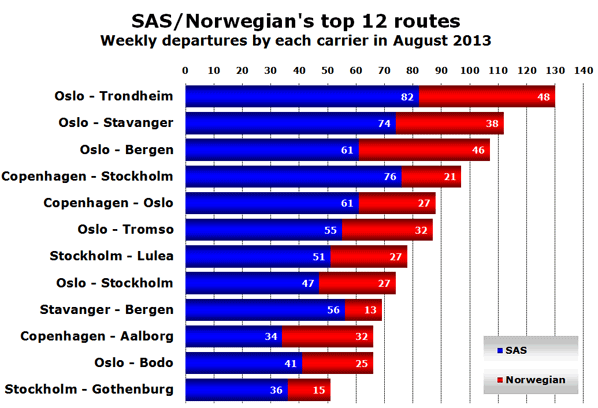 Across these 12 routes SAS has around 65% of all weekly frequencies compared with 35% for Norwegian.