The highlight of the currently sluggish Canadian market is the growth in Transborder (US) traffic. Two airports that welcomed new US services this year are Calgary (to Dallas/Fort Worth with WestJet), and Edmonton (to Newark with United Airlines).

First quarter passenger figures for 10 of Canada’s busiest airports, reveal that demand is up just 0.5%, representing a sluggish start to the year, though last year’s extra day in February means that on a like-for-like basis traffic is actually up 1.6% in the first three months of 2013. Last year passenger numbers at these leading airports was up almost 4%, with all airports reporting growth, ranging from Edmonton (6.4%) to Halifax (just 0.3%). However, data for 2013 (which varies by airport regarding the most recent available month), shows that Halifax, Ottawa, Vancouver and Winnipeg have reported year-on-year declines in each reported month this year. Only Calgary, Edmonton and Kelowna have managed to achieve passenger growth in every reported month so far. 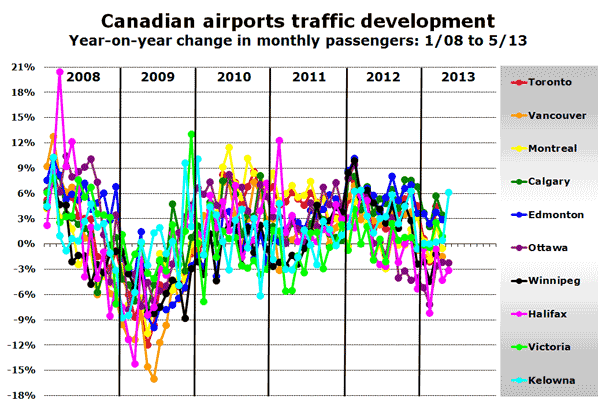 Transborder (US) market most robust at present

The eight busiest Canadian airports all break down their traffic figures into domestic, transborder (US) and international (non-US). A graph of 2013 year-to-date ‘growth’ for each airport by region reveals that domestic traffic is up at only four of the eight airports, with Calgary (+5.4%) leading the way, and Ottawa (-5.4%) performing least well. In the transborder market, five of the eight airports are reporting growth, led by Toronto (+6.7%) and Edmonton (+5.7%). 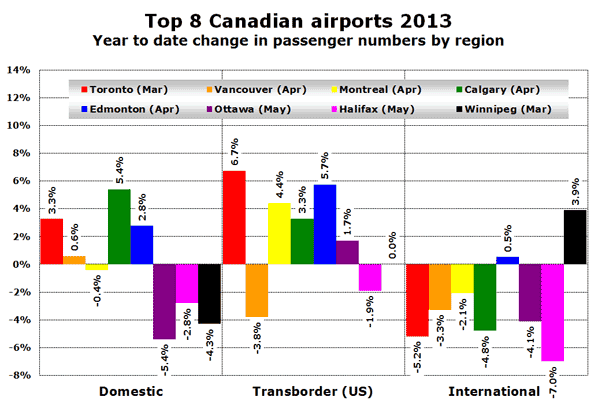 The international market appears to be suffering most with six of the eight airports reporting a decline in this segment, and only Winnipeg (+3.9%) and Edmonton (+0.5%) reporting an increase in passenger numbers. Only Edmonton is growing in all three market sectors among these airports, though statistics from Quebec City Airport (ranked 13th in Canada in 2012) reveal, that it too has managed growth in all three segments so far this year.

The following new services have already started in 2013 from Canada’s main airports:

The next few weeks will see some exciting developments in the Canadian market, with the launch of both Air Canada Rouge (the low-cost, long-haul brand from Air Canada), and WestJet Encore, a new regional, Q400-operating division of WestJet, that is scheduled to start operations later this month.