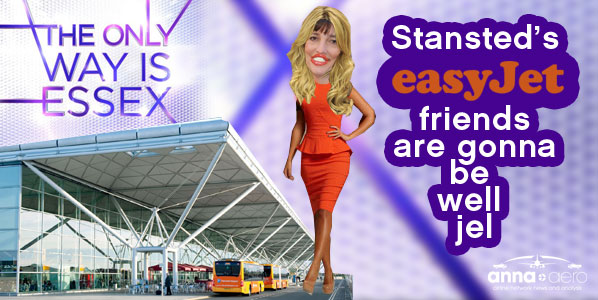 Shuuutup! Whatever could Manchester Airport-owned London Stansted have promised easyjet in the “growth framework agreement” which will “enable” it to double its traffic to 6 million by 2018? And how will it effect London Southend – the other easyJet Essex airport which appears to be performing well?

The recent announcement that London Stansted’s new owners Manchester Airports Group (MAG) have concluded a “growth framework agreement” with easyJet, the airport’s second biggest carrier, raises some interesting questions. According to the MAG press release it will “enable” easyJet to increase its passenger numbers from 2.8 million per annum at the airport (about 16% of the airport’s total in 2012), to six million, by 2018. However, enabling something to happen is no guarantee that it will. Analysis of the number of weekly departures operated by easyJet at its four London airports since 2001, shows that easyJet’s presence at Stansted peaked in 2005, as measured by weekly departures. At that time there was little to choose in terms of size between the airline’s operations at Gatwick, Luton and Stansted. 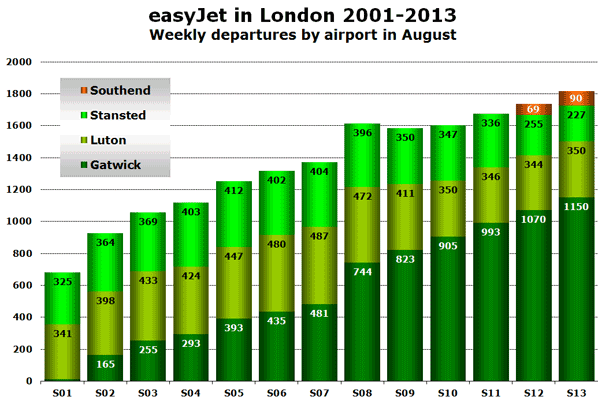 Luton operations appear to have peaked in the summer of 2007 before falling significantly between 2008 and 2010, since when the number of flights operated there has remained fairly stable. Notable cut-backs at Stansted were made in 2009, and then again in both 2012 and 2013. If easyJet were to double the number of flights at Stansted by 2018, it would still only be operating 10% more flights than it did in the summer of 2005.

Gatwick’s operations have grown rapidly since 2001, but received an added boost in 2008 when easyJet acquired GB Airways, which had a significant presence at the airport. From that time on, Gatwick has been easyJet’s leading London airport, and this summer will account for over 63% of easyJet’s flights at London airports. This may grow still further next summer, when easyJet allocates the slots it has agreed to purchase from flybe, who are departing the airport.

In contrast, Stansted accounts for just over 12% of easyJet’s flights in London this summer, down from 48% in the summer of 2001 when easyJet acquired Go (although those flights remained operated and marketed by Go that summer).

In the last five years, easyJet has only grown its London flights by 13%, despite the opening of an additional base at London Southend Airport. However, during the same period the number of routes operated during the peak summer period has increased by 49%, from 115 to 171, indicating that the average weekly frequency for easyJet’s London routes has fallen (from just over 14 flights per week – twice-daily –  to just over 10 flights per week). 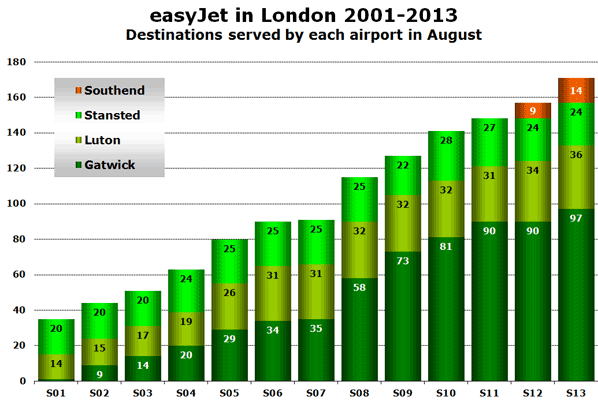 At Stansted, while the number of weekly departures has fallen by 45% since the summer of 2005, the number of destinations served has remained virtually unchanged, falling from 25 to 24 during that period. However, that modest reduction disguises the fact that nine routes (to Alicante, Almeria, Barcelona, Basel, Bologna, Faro, Newcastle, Tallinn, and Valencia) were dropped, while eight routes (to Bodrum, Cagliari, Dalaman, Dubrovnik, Marrakech, Sharm El-Sheikh, Sofia and Split) were added.

easyJet’s new agreement with London Stansted raises several questions, the answers to which may not become apparent for some time.