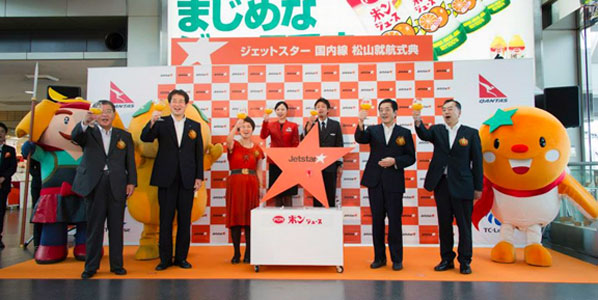 Matsuyama Songshan Airport became Jetstar Japan's newest destination on 11 June, with the launch of flights to Tokyo Narita. Celebrations included toasting the new route with a glass of locally produced POM Juice (a type of orange juice). Matsuyama is now Jetstar Japan's ninth destination in Japan, and the Tokyo service is the airline's 13th route for its fleet of 12 A320s.

Last summer saw the launch of not one, not even two, but of three new LCCs in the Japanese market. AirAsia Japan, Jetstar Japan and Peach all began operations within months of each other, and all have been growing steadily under the guidance of their parent companies, which includes at least some influence from either ANA or JAL in all three cases. Jetstar Japan launched its first flights from Tokyo Narita on 3 July 2012, with a fleet of three 180-seat A320s, and is a joint venture between JAL (33.3%), Qantas (33.3%), and two major Japanese companies (33.4%). According to Airbus data, its fleet has now quadrupled in size to 12 A320s.

According to schedule data Jetstar Japan will, this summer, be operating non-stop on 13 domestic routes across Japan, seven from Tokyo Narita, four from Osaka Kansai (including Tokyo Narita), and three from Nagoya Chubu. In total, the airline will be operating 70 flights per day, basically three round-trips for each aircraft. The airline has a monopoly on four of the routes from Tokyo Narita, but it should be noted that each of the destinations concerned (Kagoshima, Matsuyama, Oita, and Osaka Kansai) is served by multiple daily flights from Tokyo’s Haneda airport, by a variety of airlines. 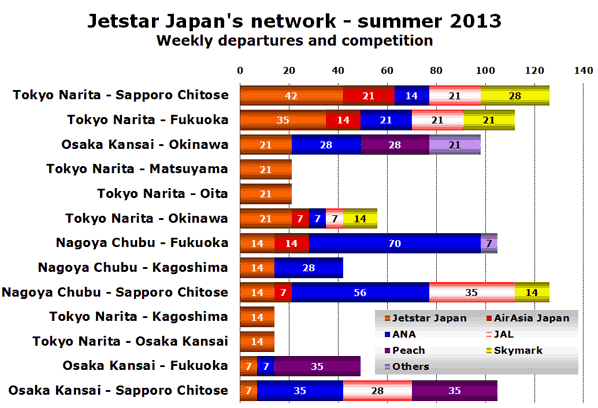 Matsuyama, in Ehime Province on the island of Shikuku, became the airline’s newest destination when it launched daily flights there from Tokyo Narita last week. Frequency will increase to three-times daily from 25 July. Matsuyama Airport handles just over two million annual passengers, and serves Matsuyama, a city with a population of around half a million, and a popular tourist destination, famous for its hot springs and 17th century castle.

Kagoshima added at the end of May

Kagoshima, located on the southern tip of Japan’s southernmost major island, Kyushu, was added to the airline’s network at the end of May, with daily flights to both Nagoya Chubu and Tokyo Narita starting on 31 May. It thus became the airline’s eighth destination. 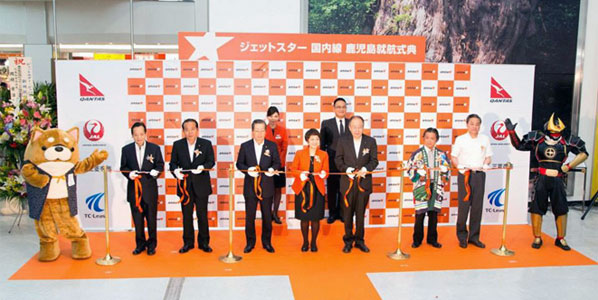 This was the launch event at Kagoshima Airport on 31 May to celebrate the airline's two new routes to Tokyo Narita and Nagoya Chubu. The characters on the end are Satsuma (the dog) and Hayato (the warrior).