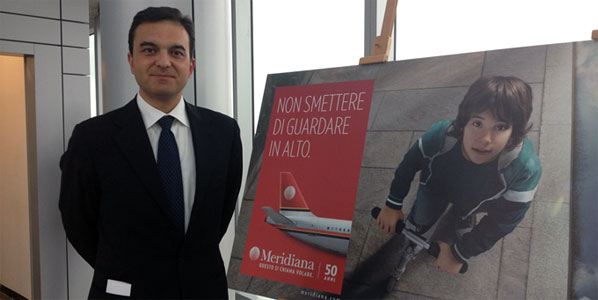 New Meridiana Group Airlines CEO Roberto Scaramella joined the airline in January, just in time to celebrate the airline's 50th birthday (it was known as Alisarda from 1963 to 1991). Having merged with Eurofly in 2010 to create Meridiana fly, it has now absorbed Air Italy, and is once more being branded as "Meridiana". The Olbia-based airline's fleet now comprises 28 aircraft, with further rationalization expected in the next 12 months.

Italy’s second largest home-based airline, Meridiana (IG), has been through some interesting developments in recent years. Formed in Olbia, on the island of Sardinia, in 1963 as Alisarda, the name was changed to Meridiana in 1991. In 2010, the airline merged with Italian charter airline Eurofly to create Meridiana fly. Last year, the airline also merged with Air Italy (I9), but in January of this year both carriers had their permanent AOCs removed by ENAC (the Italian civil aviation authority), to be replaced by provisional licences. Earlier this month the airline’s permanent operating licence was restored, indicating that the authorities are now comfortable with the financial situation of the airline, as it goes about restructuring its business.

Fleet reduced from 37 to 28 aircraft

The Meridiana Group Airlines (which includes Meridiana fly and Air Italy) is now branding all scheduled flights once more as “Meridiana”, with a revised livery. Having absorbed Eurofly (an all-Airbus operator) and Air Italy (an all-Boeing operator), the airline’s fleet is still far from ideal. In less than a year, the airline’s fleet has been reduced from 37 to 28 aircraft – 10 MD-80s, seven A320s, seven 737s, three 767s, and an A330 which the airline is currently operating on behalf of Turkish Airlines. However, further rationalization is planned in the next 12 months.

Heavy focus on domestic routes to Sardinia and Sicily

The demise last August of Catania-based LCC Wind Jet, with which Meridiana fly codeshared on a number of services, has given Meridiana a stronger position at several airports in Sardinia and Sicily. According to schedule data for this summer, Meridiana’s biggest base is at Olbia Costa Smeralda Airport, in which the airline’s holding company owns an almost 80% share. 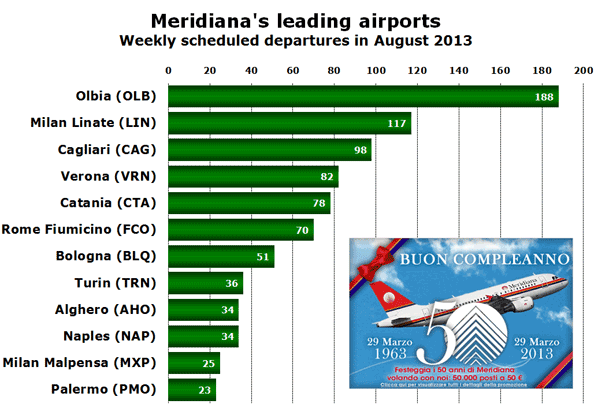 From Olbia, the airline operates nearly 200 departures per week this summer, including new routes to Kiev and Tel Aviv, both of which have recently been launched. However, well over 90% of flights from Olbia are domestic, including multiple daily flights to Milan Linate and Rome Fiumicino. Milan Linate’s second position is achieved thanks to multiple daily flights from Sardinia (Alghero, Cagliari and Olbia) and Sicily (Catania and Palermo).

Apart from the recently introduced destinations of Kiev and Tel Aviv, other non-Italian destinations served with scheduled flights include London Gatwick, Paris CDG, Moscow Domodedovo, Nice and various Greek holiday destinations. In addition, a number of codeshare arrangements with airlines including airberlin and Iberia, enables the airline to offer a wider range of international destinations. Further codeshares are apparently due to be announced in the near future.