Norwegian launched flights from Stockholm Arlanda Airport to New York JFK Airport on 3 June, and celebrated with roller-bladers and cheerleaders. Further long-haul services from the airline are scheduled to begin to Bangkok on 20 June, and Fort Lauderdale on 2 December. The airline's own 787s should soon be operating these routes.

Sweden’s airports handled almost 38 million passengers last year, up 2% on the previous year, at a time when many other major European countries were seeing either stagnation, or a fall in airport traffic. Between 1996 and 2000 traffic grew at an average rate of almost 7% per annum, but between 2000 and 2012 demand growth has averaged less than 1.3% per annum, with notable dips between 2000 and 2003, and then again in 2009. 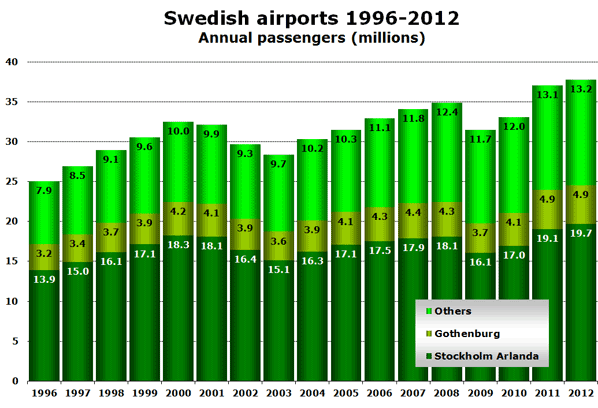 SAS has only one-third of Swedish market

Despite its status as the official flag-carrier of Sweden (as well as Denmark and Norway), SAS only accounts for around one-third of all seat capacity at Swedish airports this summer. Oslo-based, pan-Scandinavian rival Norwegian now has almost 18% of the market, with Ryanair in third place with just under 10%. Ryanair does not operate flights at either of the biggest airports in Stockholm and Gothenburg, but instead offers over 40 destinations from Stockholm Skavsta, and 18 destinations from Gothenburg Save. 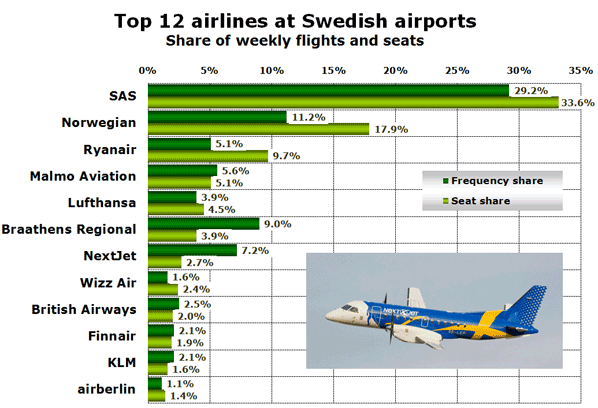 Swedish customers still benefit from a number of regional airlines operating primarily in the domestic market. In terms of weekly seat capacity the largest of these is Malmo Aviation, though in June it only operates to three destinations from Stockholm’s downtown airport at Bromma. Braathens Regional (the new name for Golden Air) is also focussed on serving the downtown airport, while NextJet’s network ignores Bromma in exchange for focussing on niche routes from Stockholm Arlanda. NextJet’s fleet includes a number of BAe ATPs, making it one of just a small handful of airlines still operating the type.

Wizz Air has 19 routes in Sweden, easyJet just one

Wizz Air operates 19 routes from a total of three Swedish airports, while Vueling’s only presence in Sweden involves routes to Barcelona from Gothenburg and Stockholm Arlanda. easyJet is even less well represented, operating just a single route from Geneva to Stockholm Arlanda (since October 2008), though it has previously served Gothenburg from Berlin, London and Manchester. Pegasus has a single route from Stockholm (to Istanbul), as does germanwings (to Cologne/Bonn).

Maybe surprisingly, only Qatar Airways of the big Middle Eastern hub carriers currently serves Stockholm (and has done since November 2007), though Emirates is planning to finally launch flights in September. Other foreign carriers serving long-haul destinations from the Swedish capital include Air China (to Beijing) Delta Air Lines (to New York JFK), Ethiopian Airlines (to Addis Ababa via Cairo), Thai Airways (to Bangkok), and United Airlines (to Newark). A relative curiosity is the presence of not one, but two Iranian carriers (Iran Air and Iran Asemen Airlines) both offering non-stop flights to Tehran.