On 1 March this year Algiers Airport celebrated the launch of daily flights to Dubai with Emirates. Answering questions from the local media were Adel Al Redha, Emirates’ EVP Engineering and Operations, and Jean Luc Grillet, Emirates’ SVP Commercial Operations Africa. Emirates is one of four new carriers at Algiers Airport this year, the others being Air Malta, Royal Jordanian and Vueling.

With tourist-friendly Morocco and Tunisia as its neighbours, Algeria has yet to embrace tourism to the same extent, though recent developments in the country’s busiest airport would suggest that changes are happening. Algiers Houari Boumediene Airport (ALG), named after a former President of Algeria, saw passenger numbers grow last year by 13.0% to 5.41 million, the second year in a row that traffic has grown by at least 10%. 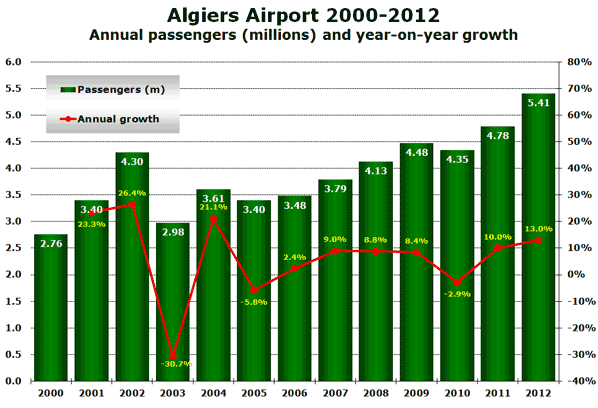 So far, in the first five months of 2013, passenger numbers are up 14% compared with the same period in 2013, helped by the launch of several high-profile new routes, from carriers who are new to the airport. In February, Royal Jordanian began twice-weekly flights to Amman, followed on 1 March by the arrival of Emirates, operating daily A330-200 flights to Dubai. Since then Vueling has started four-times weekly flights to Barcelona, followed in mid-June by Air Malta introducing twice-weekly flights to Malta. July is the airport’s busiest month, and last year’s demand profile gave it a SVID rating of 2.2 (“Good”) compared with 2.7 in 2011. 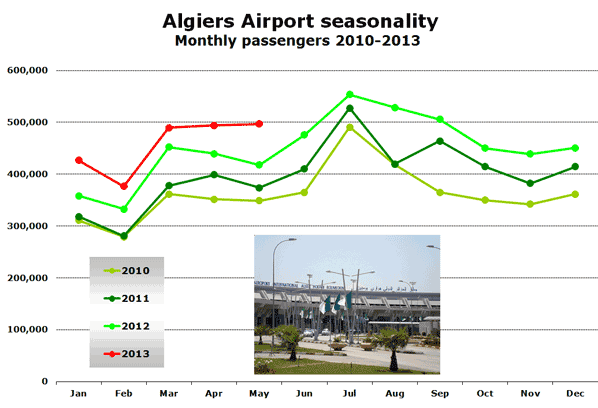 Air Algérie still accounts for almost two-thirds of all flights

Analysis of Innovata schedule data for July 2013 shows that the national carrier, Air Algérie, still accounts for over 60% of all scheduled commercial flights at the airport this summer, operating non-stop services to some 60 destinations from the Algerian capital. In terms of weekly flights, French leisure carrier Aigle Azur ranks second, though if we look at seat capacity, Saudia now ranks second thanks to its multiple daily flights in July to Medinah, to coincide with Ramadan.