French aviation market to be discussed in detail in Bordeaux at French Connect this week; anna.aero will be “live” 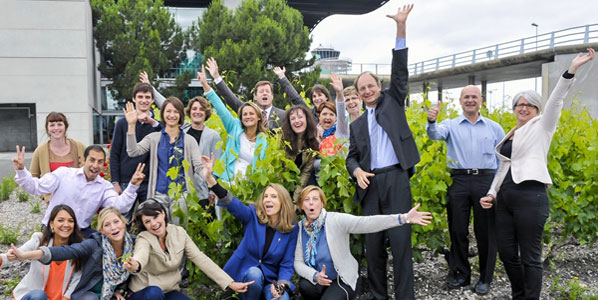 Another vintage year for French airports: Jean-Luc Poiroux, Commercial Development Director of Bordeaux Airport (reaching for the sky in the back row here) says the vineyard besides the billi low-cost terminal produces 1,000 bottles of “really good wine” each year. To find out for yourself, come to Bordeaux this weekend, where the airport will be hosting the 10th French Connect.

In each of the last two years, the French market has grown the most (as measured by airport passengers), out of the five biggest European markets, the others being Germany, Italy, Spain and the UK. However, passenger growth of 3.0% in 2012 is significantly lower than the 6.6% achieved in 2011. Last year, France had 17 airports which handled more than one million passengers, and only two of them, Bastia and Montpellier, reported a year-on-year decline in passenger numbers. The only two leading French airports that had seen traffic fall in 2011 (versus 2010), were the two fastest-growing French airports in 2012, Lille and Marseille, with Nantes also managing double-digit growth. 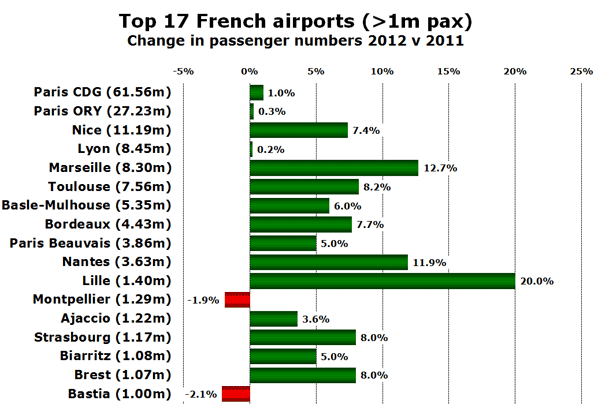 So far in 2013, the country’s airports have had mixed results, with Lille once again the star performer, continuing to report growth of around 20% in the first five months of this year. However, combined traffic at the two main Paris airports operated by Aéroports de Paris (ADP), Orly and CDG, is up just 0.3% in the period January to May. Domestic traffic for ADP is down 1.6%, other European markets are down 0.8%, leaving other international markets (+2.3%) to be responsible for overall growth.

Analysis of the leading country markets by scheduled seat capacity for this summer (and last summer), reveals that overall international seat capacity is up around 4%, but that three of the top five biggest country markets (UK, Italy and Germany) are down, compared with a year ago. The biggest growth among the major markets has come in the North African markets of Morocco, Algeria and Tunisia, all of which are expecting double-digit growth. 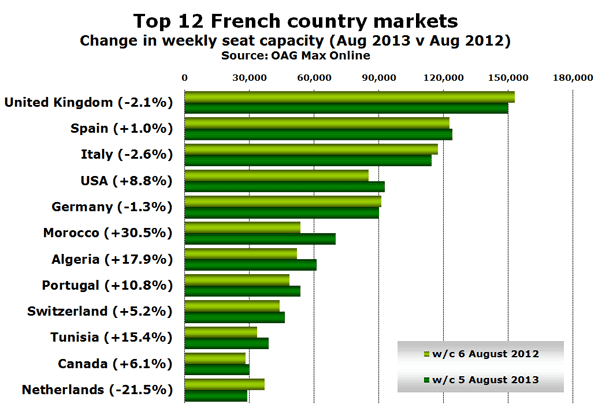 Morocco’s 30% growth follows an almost 20% decline in 2012, as a result of some uncertainty following the Arab Spring, but Ryanair’s decision to open bases in Fez and Marrakech in April has also helped revive the market. The US market has also bounced back, with almost 9% growth this summer, after a 5% fall in 2012. Portugal joins Tunisia in being the only country markets to see scheduled seat capacity growth of at least 5%, in each of the last two years. Analysis of the leading airlines operating international flights from French airports this summer (and last summer), reveals that while Air France’s capacity has remained almost unchanged, the next three airlines (all foreign LCCs) have all increased their seat capacity. Air France’s response has been to significantly increase seat capacity (by almost 50%) at transavia.com France, its own LCC, which is the focus of this week’s airline profile. Breaking into the top 12 is Delta Air Lines (like Air France, a member of the SkyTeam alliance), which has increased capacity by almost 40%, as a result of recently starting new, daily, non-stop flights from Boston and Newark to Paris CDG, and by doubling frequency on its existing Atlanta service. 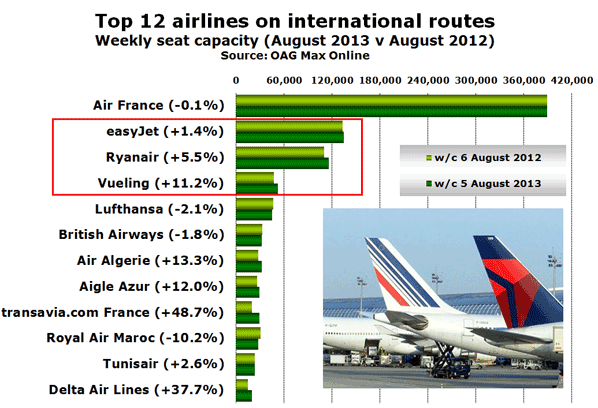 Volotea grabs 4% of domestic market within a year of launch

In the domestic market, Air France (and its newly created regional subsidiary HOP!) dominate, but according to schedule data for August, easyJet’s market share has grown to 11% of seat capacity, while newcomer Volotea (4.1%) has overtaken Ryanair (3.3%). Volotea, which only launched operations last April, will this summer be operating 25 domestic routes, with an average weekly frequency of less than four flights per week. Air France accounts for 56% of all domestic seats in August, HOP! has 13.3%, while Air Corsica (in which Air France has a stake) has a further 9.3%.

anna.aero “live” at French Connect in Bordeaux this coming week

For more information on the French market, come to Bordeaux this weekend, where the airport will be hosting the 10th French Connect event. anna.aero’s Chief Analyst will be presenting a keynote address on the state of the French market, and how it compares with elsewhere in Europe. In addition to the slides in this story, there will also be in-depth analysis of traffic stimulation on French domestic routes in 2012, plus analysis of all the new routes started in 2012, and planned to start in 2013.