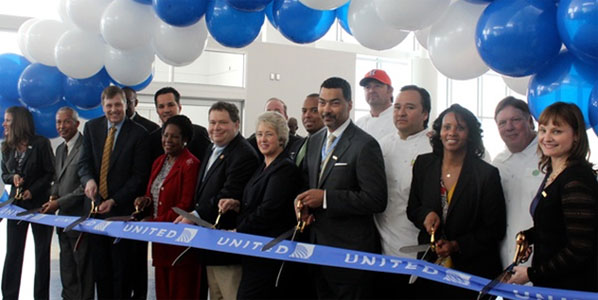 United Airlines’ dedicated $97 million of the $160 million total upgrade cost for the 225,000 sq ft concourse, which will serve as the launching point for United Express regional flights from Houston Intercontinental. For passengers, it means more seating, more outlets and WiFi.

According to data provided by Houston Airport System, in 2012 Houston Intercontinental Airport handled four times the number of passengers processed by its sister facility, in spite of having fallen below the 40 million mark for the first time since 2005. Traffic loss of -0.6% in 2012 did in fact follow a slightly larger one of -0.9% in the previous year. However, in 2013, Houston Intercontinental has already welcomed the arrival of Turkish Airlines (winning one of the anna.aero Route of the Week prizes in April) and is now readying up for Air China’s first flight from Beijing, which is scheduled for next week. 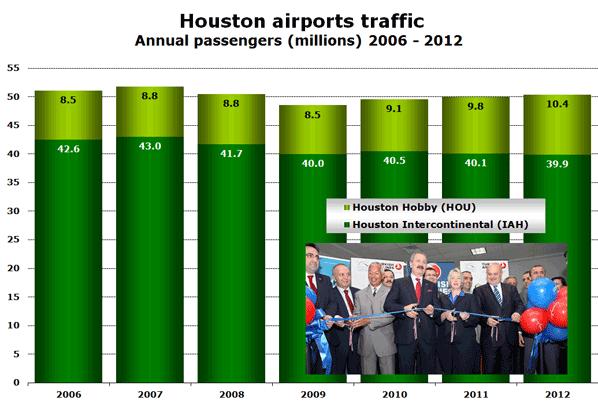 In terms of seasonality, in 2012 both airports achieved an excellent 0.7 result when examined using the anna.aero Seasonal Variation in Demand (SVID) Calculator, indicating healthy year-round demand in the Houston area.

Top two airlines have more than 85% of the domestic market

Examination of the Innovata weekly average capacity data for the Houston market shows that, to a high degree, it is dominated by two carriers – United Airlines, whose hub operation at Houston Intercontinental provides for 66.2% of weekly frequencies and 58.6% of seat capacity in the market, and Southwest Airlines. 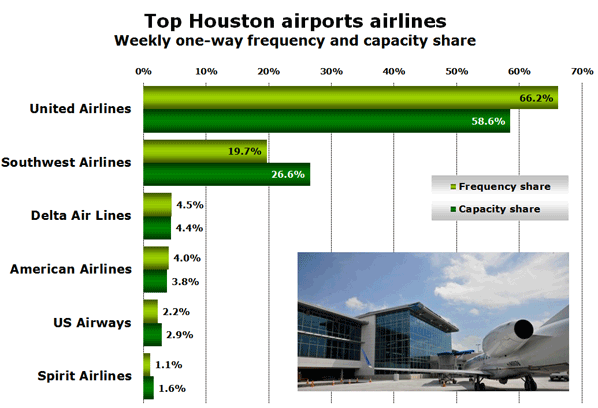 For the latter operator, Houston Hobby is one of its focus destinations – as opposed to United, which in 2012 reduced its seat capacity in Houston by 7.3% compared to 2011, Southwest Airlines continued its growth closing the year with 5.2% more seats year-to-year. In fact, the low-cost carrier is now planning for its new international terminal in Houston, which is expected for completion at an estimated cost of $156 million in late 2015. The 280,000-square-foot facility will host the carrier’s first international flights to Mexico, the Caribbean and cities in Central and South America.

Two of the MEB3 carriers have a presence in Houston – Emirates, which has launched its Dubai services back in December 2007, as well as Qatar Airways, which had been serving the Texan airport since March 2009. Etihad, the missing MEB3 carrier, is yet to set up a link to its own Abu Dhabi hub.

More than a hundred domestic and almost 70 international destinations are available from the two Houston airports. Coming top of the list of domestic routes is Los Angeles, served by a mix of services from Houston Intercontinental by United Airlines (109 weekly frequencies in July 2013), American Airlines (21) and Spirit Airlines (7), as well as Southwest Airlines’ four-daily flights from Houston Hobby. 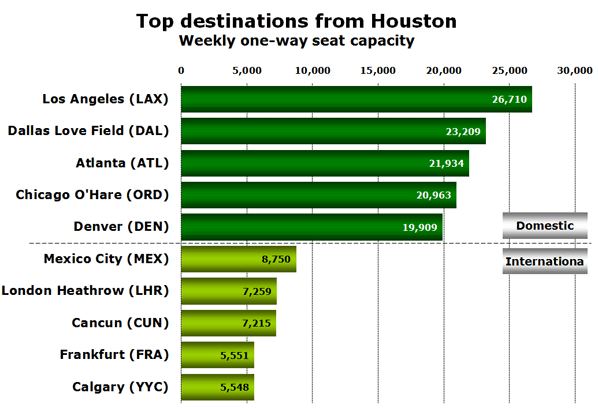 In terms of international destinations, Mexico City is #1 with a total of 87 weekly frequencies operated by United Airlines (59) and Aeromexico (28). Both London Heathrow and Cancun are served with slightly more than 7,200 weekly seats, although understandably, the Mexican destination attracts more frequencies given distances involved. Frankfurt, the second most popular European gateway for arrivals from Houston, commands less than half of the weekly frequencies that Heathrow does, and is served with daily flights by both Lufthansa and United Airlines.