transavia.com France expanding beyond Paris Orly; over 40% of routes this summer from French regional airports Typical of transavia.com France's expansion into French regional airports, was the launch in April of twice-weekly flights between Lyon and Seville. This summer, the airline is operating over 50 routes from French airports, of which over 40% are now from non-Paris airports.

Since the mid-1990s, several of Europe’s legacy airlines have created, or been associated with, various low-cost airlines, with varying degrees of success. British Airways launched London Stansted-based go in 1998, which was profitable, but was ultimately absorbed by easyJet. SAS launched snowflake in 2003, before abandoning the concept a couple of years later. KLM had London Stansted-based Buzz, its own Basiq Air brand, and now has transavia.com. Lufthansa has gradually taken control of germanwings, while Iberia, after helping to create clickair, which then merged with Vueling, has formed Iberia Express.

Air France got into the low-cost game in the summer of 2007 by creating transavia.com France, a joint venture in which Air France has a 60% stake, and transavia.com 40%. The Dutch LCC is itself 100% owned by KLM, which is, of course, now part of Air France-KLM, after the merger in 2004. Confused?

Over 50 routes operated in S13 across four French airports

Since launching from Paris Orly in May 2007, transavia.com France has grown steadily, and this summer will be operating over 50 routes from French airports, over 30 of which will be from Paris Orly. What may be significant is that most of the network growth in 2013 has come from new routes launched at regional airports, with the number of routes from Lyon growing from two to six, and Lille now being connected to six destinations, mostly in Italy and Morocco. 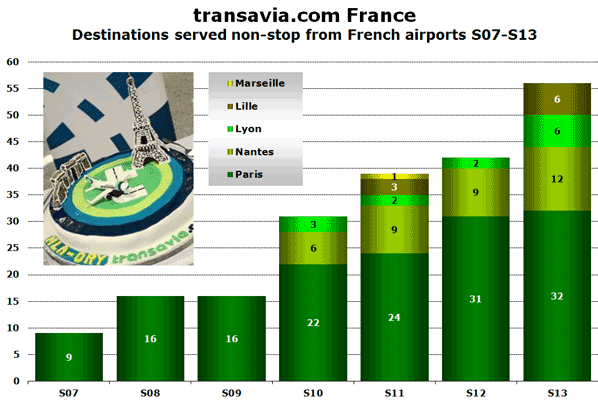 This summer has seen the carrier launch new services from Paris Orly to Essaouira (in Morocco), Lisbon, Malta, Naples and Venice, as well as the additional routes from Lille and Lyon. The routes with the highest weekly frequencies this summer are Porto (which is the only destination served with at least two daily flights), Djerba, Lisbon, Marrakech, Monastir and Venice. Routes that have been dropped since last summer include Paris Orly to Granada, Fuerteventura, Izmir, Palma de Mallorca and Tenerife Sur.

The growth in services from French regional airports this year, suggests that similar regional expansion may be on the cards for 2014. With carriers such as Aigle Azur, Air Méditerranée, easyJet, Ryanair, Vueling and Volotea, all competing for leisure traffic from French airports, Air France is looking for ways to fight back. With its current fleet of 11 737-800s, transavia.com France will need to grow further to keep up with the competition, an issue that recently appointed CEO Antoine Pussiau, will have near the top of his ‘to do’ list.