Wizz Air sets up second Ukraine base at Donetsk; adds first ever route to Kosice in Slovakia from London Luton 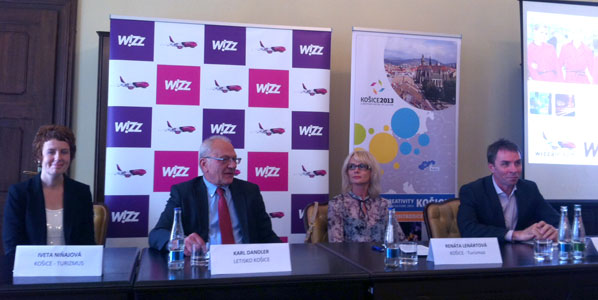 From left to right: Iveta Ninajova, Košice Tourism, Karl Dandler, Košice Airport, Renata Lenartova, Košice Tourism, as well as Josef Varadi, CEO at Wizz Air announcing the arrival of the LCC in the Slovakian city, after a three-year hiatus of serving the country.

Wizz Air Ukraine has announced that Donetsk will become the airline’s second base after Kiev Zhulyany, with a single A320 being based at the airport from 1 October. The airline has only just started serving the Ukraine airport, when it launched twice-weekly flights to Kutaisi in Georgia back in April. A second route to Dortmund is planned to start on 6 July. The new base will enable additional new routes to London Luton, Memmingen, Milan Bergamo and Rome Fiumicino to be launched in early October. Bergamo will be served with three weekly flights, the other new destinations with two each. Kutaisi flights will increase to five-times weekly. As a result Wizz Air Ukraine will be operating 16 weekly departures from Donetsk suggesting that the based aircraft will typically be operating just two return flights per day.

Last year Donetsk Airport handled around one million passengers, and according to Innovata schedule data for July, there are typically 18-20 daily departures. The leading airline is UTair Ukraine, with around one-third of all flights, followed by Ukraine International Airlines, Aeroflot and Dniproavia. Other than local and Russian carriers, the airport also has flights operated by Air Arabia (to Sharjah), flydubai (to Dubai), Lufthansa (to Munich), Pegasus Airlines (to Istanbul), and Turkish Airlines (also to Istanbul). Wizz Air Ukraine’s flights to Italy and the UK will be the first non-stop scheduled services to these countries from Donetsk.

Wizz Air has also announced that it is returning to Slovakia after a three-year absence. Between September 2009 and January 2010 Wizz Air served Rome from Bratislava, but since then Slovakia has been conspicuous by its absence from Wizz Air’s route network. This is set to change, with the launch of twice-weekly flights from Wizz Air’s busiest airport, London Luton, to Košice in eastern Slovakia on 17 September. Frequency will increase to four weekly flights from the start of the winter season. Wizz Air will not be the first airline to operate between London and Košice. Between the end of October 2007 and the end of August 2009 (when it ceased all operations), Slovakia’s very own LCC, SkyEurope, operated between three and four weekly flights between Luton and Košice.

Speaking in Donetsk, Akos Bus, General Director of Wizz Air Ukraine said, “I am thrilled today to announce our second base in Donetsk. Wizz Air Ukraine has created and grown low cost air travel in Kiev to over 600,000 yearly passengers and we expect to carry up to one million passengers in both bases, Kiev and Donetsk, over the coming 12 months. Our commitment to the Ukraine is clear: we deliver reliable air traffic operations with very low fares to the consumer. Our passenger growth benefits those airports that offer lower costs and we welcome Donetsk Airport as the second base airport in Wizz Air Ukraine’s network. As long as low costs are offered, Wizz Air Ukraine expects to grow further in Kiev and in Donetsk.”

Speaking in Košice, Jozsef Varadi, Chief Executive Officer of Wizz Air said: “Today Košice is joining Europe’s most extended low fares network in terms of geographical reach. The route connecting Košice and London Luton will start operating in a bit more than two months and I am certain that it will be highly popular among Slovakian citizens. Wizz Air is committed to stimulate significant air traffic that benefits local economies, tourism industries and employment. As this year’s European Capital of Culture, Košice is generating an inflow of tourists and history lovers from all over the world. Individual travellers as well as families and businesses will welcome this exciting development and contribute to job creation and tourism development in Slovakia.”