anna.aero has identified over 100 new services that airlines have launched to and from Greek airports this summer. Almost half of these have been launched by Aegean Airlines (27) and Ryanair (21). As a result capacity to all Greek airports is expected to be up around 3% in this summer's peak, with several tourism-supporting airports seeing growth of well over 10%. New Ryanair base Chania will see a 15% increase in capacity.

Although Greece’s airports reported declining traffic over the winter months, the latest figures from the Hellenic Civil Aviation Authority suggest that there may be cause for optimism for the summer ahead. In May, passenger numbers at all Greek airports were up almost 12% compared with last May. Traffic at the country’s capital airport in Athens was up 1.4%, the first year-on-year rise since July 2011. If Athens Airport is excluded, passenger numbers across all other Greek airports was actually up almost 17%. 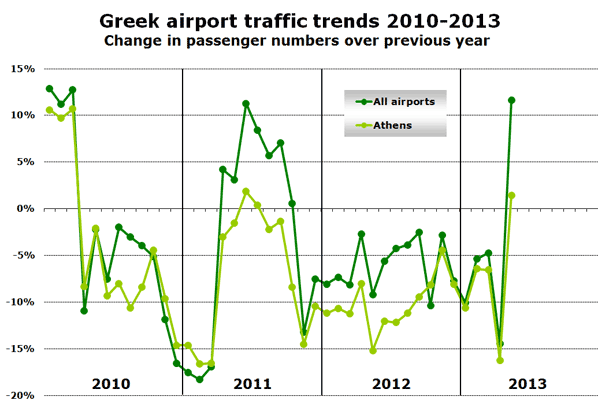 Seasonality is a major issue at Greek airports due to the dominance of the inbound tourism market during the summer, especially in July and August. In 2012, Greek airports handled 12.1 million passengers in those two months, representing 32.9% of traffic for the whole year. Mykonos Airport handled 56% of its total annual passengers in July and August. 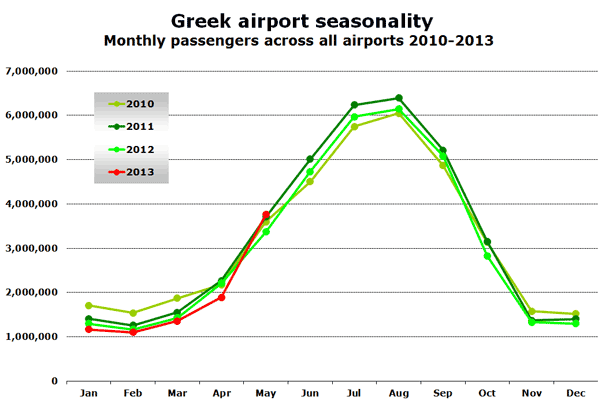 According to anna.aero’s new route database there have been over 100 new routes launched by Europe’s airlines to/from Greek airports since the start of the year. In summary:

Analysis of Innovata / Diio Mi capacity data for August 2013 compared with August 2012 indicates that planned capacity for scheduled airlines across all Greek airports is currently up 2.8%. If Athens (-4.5%) and Thessaloniki (-10.2%) are excluded, then the remaining Greek airports, those catering primarily to the tourism industry, are expected to see a 10.3% increase in capacity this summer.