Air Canada rouge launches with 14 destinations and four aircraft; only Edinburgh and Venice not already served 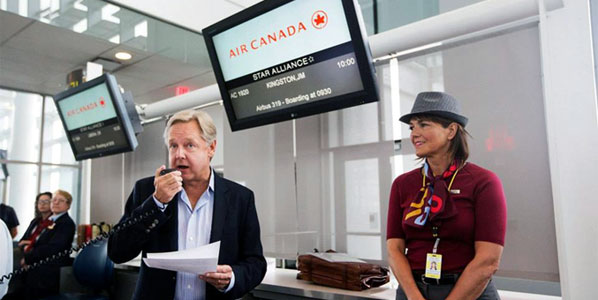 Canada Day saw the launch of Air Canada rouge, the national carrier's new leisure brand, operating four aircraft on 14 routes this summer. CEO Michael Friisdahl (left), and VP of Customer Experience Renee Smith-Valade (right) announce the boarding for the airline's first flight to Kingston in Jamaica from Toronto Pearson International Airport. Only two of the airline's 14 routes (to Edinburgh and Venice) were not already operated by Air Canada mainline.

Air Canada’s latest leisure brand rouge (remember Tango and Zip?) launched on 1 July, Canada Day. With a fleet of four aircraft (two 142-seat A319s for Caribbean services, and two 264-seat Boeing 767-300s for transatlantic flights), the airline’s summer programme comprises a total of 14 routes, 13 from Toronto Pearson, and one from Montreal Dorval. However, of these, just two (Edinburgh and Venice) were not already served by Air Canada mainline. A summary of the new airline’s network from Toronto Pearson is shown below:

In addition, the airline is also offering twice-weekly flights between Montreal and Athens. The level of competition is significant on many of these routes, with lower-cost rivals such as Air Transat, Sunwing Airlines and WestJet being key competitors.

Coverage of Air Canada rouge’s inaugural flight from Toronto to Edinburgh courtesy of The Edinburgh Reporter.

Air Canada recently confirmed that Air Canada rouge’s winter network would grow to 23 destinations, spread across the Caribbean, Florida, Las Vegas and Mexico (but not Europe). The 767s will instead be used to serve Las Vegas and Montego Bay during the winter season. 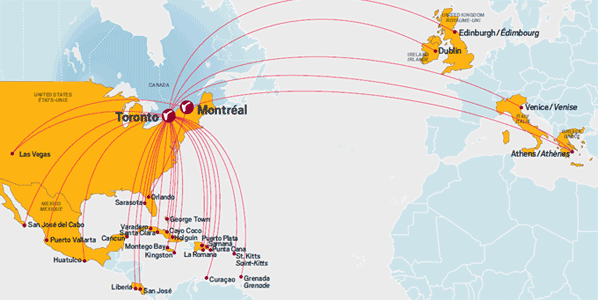 Air Canada rouge's total network. European destinations are only served in the summer, while destinations in Florida, Las Vegas and Mexico are added for the winter season.