AirAsia Japan set to ‘disappear’ at end of October; ANA to announce plans for ‘new’ LCC later this month 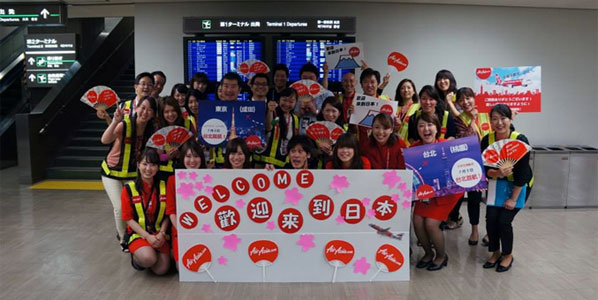 AirAsia Japan's future may be uncertain, but that has not stopped it launching new routes. On 3 July the carrier launched its fourth (and longest) international route, and ninth in all, from Tokyo Narita to Taipei Taoyuan. The airline's daily flights will compete with services already offered by All Nippon Airways, China Airlines, EVA Air and Japan Airlines. Passengers on the first flight from Taipei were greeted on arrival in Narita by a selection of the airline's backroom staff.

The recent announcement that AirAsia would sell its 49% stake in AirAsia Japan to All Nippon Airways (ANA) for around €19 million, comes less than a year after the airline first took to the skies, operating initially from Tokyo Narita Airport. According to ANA, the airline lost around €27 million in the year-ending March 2013, though given that flights did not start until 1 August 2012, that is not entirely surprising. However, there seems to have been a fundamental difference of opinion regarding the airline’s future direction, including issues such as cost management and where the main base for domestic operations should be. One of ANA’s options would be to merge the airline with the other LCC that it has a share in, Peach Aviation, a joint venture with Hong Kong investment group, First Eastern Aviation Holdings.

Despite the announcement that the AirAsia Japan brand would disappear at the end of October, the airline has continued its relatively slow expansion, with the launch this week of the airline’s ninth route. Daily flights were started on 3 July between Tokyo Narita and Taipei Taoyuan, which at almost 2,200 kilometres, is the airline’s longest route so far. A summary of the routes currently operated is provided in the following table.

Competition is intense on all of the airline’s chosen routes. At present AirAsia Japan operates just 13 daily return flights using a fleet of four 180-seat A320s.

What AirAsia said (a while back)

A look at AirAsia’s 2013 Q1 results presentation reveals that the airlines was, “In discussion with ANA to produce a turnaround plan and ensuring AirAsia’s investment is secured”, and that there was “Strong forward booking for summer period from May onward.”