Croatia joins EU; its airports still growing faster than most other member states 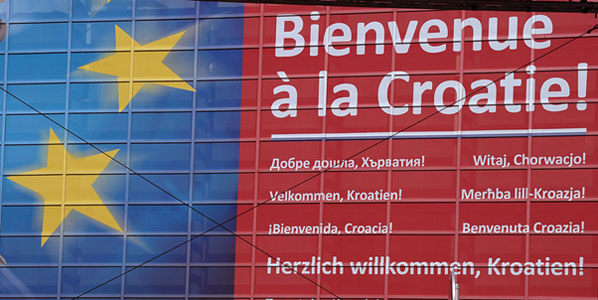 Welcome to the EU: From now on, this is the message which will greet all arriving passengers to Croatia’s five biggest airports – Zagreb, Dubrovnik, Split, Zadar and Pula. In just over 10 years, the number of people travelling to and from this Adriatic coast country has doubled, and annual growth for 2013 remains strong, currently running at 5%.

Having applied for membership of the EU in 2003, Croatia finally became the 28th member of this elite group of countries on 1 July. Whether it becomes a “fully paid-up” member of the EU, for example taking the single currency or becoming part of the Schengen area, remains to be seen, but with the country still wallowing in its fifth year of recession (like most of Europe), and with over 20% unemployment, its accession could not have come at a better time to help spark an economic recovery. That said, the country’s aviation market is booming, with 2012 passenger figures for the top five airports having doubled since 2003, and this coming despite their cummulative ‘growth blip’ in 2008-2009. 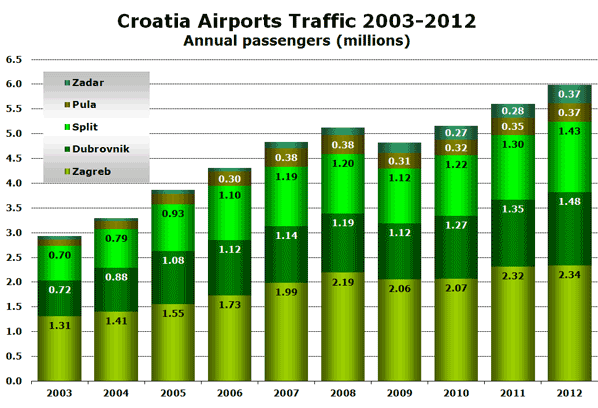 While the growth rate may have slowed down from the double digit figures achieved between 2003 and 2007, the 7% increase of last year will be jealously regarded by many of the EU’s other 27 member states. Preliminary passenger figures for 2013 (up to April – for Dubrovnik, Split, Zadar and Zagreb only) would appear to suggest that the growth has slowed, down to around 5%. Fuelled largely by Ryanair’s growth at the airport, which in August this year will operate to 16 destinations with 39 weekly frequencies (up from 10 and 28 last August), Zadar has crept in front of Pula to become the nation’s fourth largest airport in the last 12 months.

14 out of 15 top country markets growing, Spanish exception to the rule

The stand out performance over the last year is that of the Czech Republic, with its near doubling of weekly capacity resulting in it climbing into the top 15, pushing out Turkey. Its seats have declined as Croatia Airlines has withdrawn from the Istanbul market from both Dubrovnik and Zagreb since last August. Perhaps reflecting the relatively immature market status of travel demand to Croatia, capacity growth from the FIGUS countries (France, Italy, Germany, United Kingdom and Spain), the five biggest and most mature travel markets in Europe, would appear to be robust, with one exception – Spain. 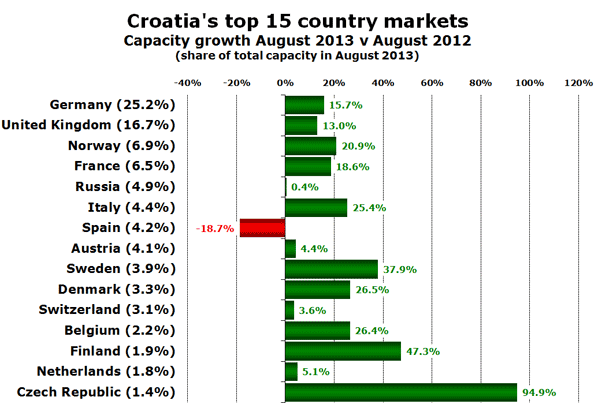 The blame for the near 20% capacity decline to Spain cannot be laid at just one airline door — easyJet has withdrawn from the market altogether, culling its Madrid to Dubrovnik route in the last 12 months, Iberia has reduced its seat offer by 14% year-on-year, while Vueling has trimmed 12% from its schedule. While others make capacity cuts, Croatia Airlines has actually seized the opportunity to expand its seat offer to Spain, with an additional 10% more seats available this year compared to last, despite stopping its Rijeka to Barcelona service.

For many, the Croatian route gold rush has continued over the last 12 months, with only three of the top 12 airlines not growing, with Croatia Airlines, the #1 capacity provider, notably being one of those carriers which has gone backwards. The state-owned, Star Alliance airline has reduced its weekly international flights by 9% since last August, with Dubrovnik (IST), Rijeka (BCN), Split (HAM), Zadar (CDG, ZRH) and Zagreb (IST, LGW, TGD) all feeling the sharp end of the network planners axe. In addition, weekly frequencies have been trimmed on Dubrovnik to Rome Fiumicino (1 flight per week), Zadar to Munich (1) and Zagreb to Amsterdam (1), Pristina (3), Vienna (1) and Zurich (1). It has not been all negative for Croatia Airlines, with Pula to Frankfurt introduced (twice-weekly), as well as a service to the new German airport in Kassel from Split, and an extra four weekly rotations to Brussels – obviously to ferry the country’s freshly appointed politicians to their new offices in Europe’s capital. 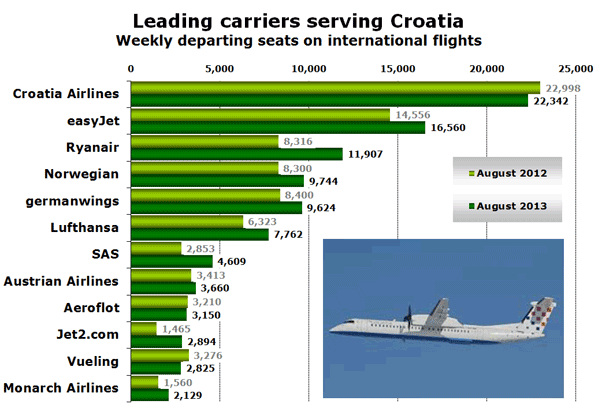 In terms of the pecking order, both easyJet and Ryanair have strengthened their respective hands in the last year, but their top 12 positions remain unchanged. Norwegian leapfrogs germanwings into fourth, despite the German carrier’s 15% annual growth, whereas the only newcomer to the top 12, UK-based LCC Jet2.com, barges its way into tenth spot, ousting Iberia as the Spanish carrier continues its route cull which has seen it drop 25% of its weekly flights in the last 12 months. Overall these top 12 airlines are expected to deliver an annual growth in weekly flights of 15% when compared to August 2012, a trend which augurs well for the continued health and prospects of Croatia’s airports.