Brazil's busiest airport continues to add new destinations and carriers. Etihad Airways (June) and Ethiopian Airlines (July) have both started serving Sao Paulo Guarulhos Airport for the first time this summer. Despite seat capacity across all Brazilian airports being down 1% in July, the main international gateway to the country is reporting a 12% increase in seat capacity this summer.

Since our previous analysis of the Brazilian aviation market in January, the dominant domestic market has, for the first time since mid-2009, stopped growing, as measured by airline RPKs (Revenue Passenger Kilometres). In the first five months of 2013, domestic RPKs are down 0.4%, while ASKs are down 6.4%, which does at least mean that the average load factor has risen from 69.5% to 73.9% for the period of January to May. Domestic RPKs were down in January and February, the first time since October and November 2008 that they have fallen in successive months. Monthly ASKs (Available Seat Kilometres) have now been down every month since last September. The last time ASKs were down for such a sustained period was from February 2003 until February 2004. 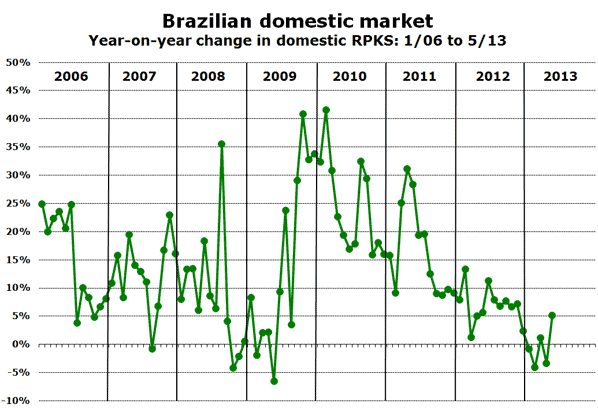 In terms of market share, Azul continues to grow, with its market share now standing at 13.3% (May 2013). Webjet ceased operations last November when GOL closed it down, but GOL’s market share remains around 35%. May 2013 data shows that Azul’s RPKs have grown by 25% compared with May 2012, but Avianca has seen the fastest growth, with RPKs up 48% compared with a year ago. 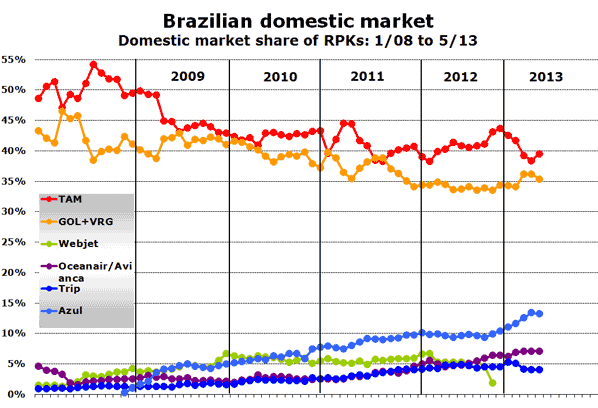 Seat capacity down 1% this summer

According to schedule data from Innovata / Diio Mi, seat capacity across Brazil’s more than 100 commercial airports will be down around 1% this July, with the number of flights down about 3%. Of Brazil’s top 12 airports, eight will see seat capacity cuts of between 2% and 9%. Only two airports are reporting significant growth; Sao Paulo Guarulhos (+12.2%) and Viracopos (+13.9%).

Ethiopian Airlines, Etihad Airways and US Airways all new

Since the beginning of the year Sao Paulo Guarulhos airport has welcomed a number of new services, including the arrival of the first ever flights from Ethiopian Airlines and Etihad Airways. In addition US Airways launched its only non-stop service to Brazil, when it began daily flights from Charlotte on 8 June.