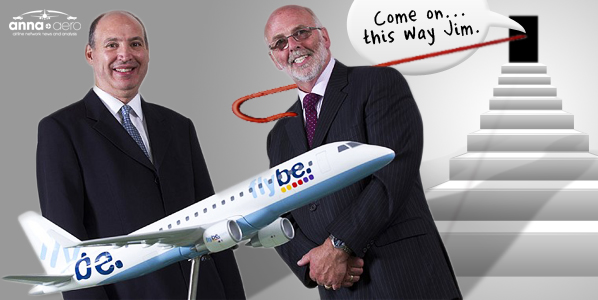 After over a decade in charge, Jim French (right) is 'moving upstairs' to become non-Executive Chairman. The airline has appointed former easyJet Chief Commercial Officer Saad Hammad (left) as its new CEO. He will oversee the airline's newly-announced plans to focus more on European and leisure destinations, to reduce its exposure in the declining (and highly-taxed) UK domestic market, which accounts for three-quarters of the airline's weekly seat capacity.

Europe’s largest regional airline, flybe, recently announced the appointment (from 1 August) of a new CEO, Saad Hammad (a former CCO at easyJet), with Jim French, the current Chairman and CEO, becoming non-Executive Chairman from the same date. The airline recently posted disappointing financial results and has embarked on a “Fit to compete” turnaround plan. One of the airline’s biggest challenges is its exposure to the UK domestic market, which has been shrinking since 2005, and where the government’s APD (Air Passenger Duty), which now stands at £13 for domestic flights, is applied to both sectors of a domestic return journey. 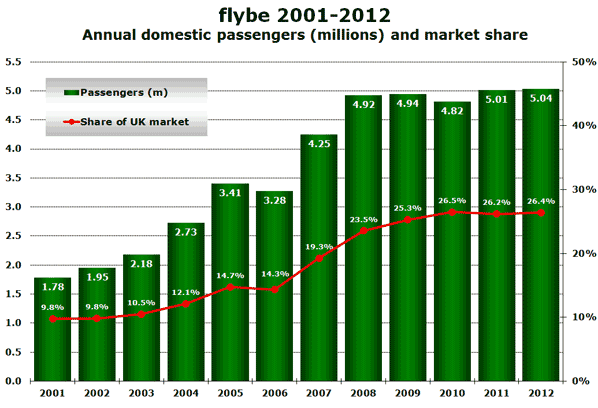 The UK domestic market peaked back in 2005 at just over 23 million passengers. Last year UK carriers transported only just over 19 million passengers between UK airports. flybe’s share of the market has held fairly stable at around 25% since 2009. The rapid growth in 2007 and 2008 can be explained by the airline agreeing a deal with British Airways to take over that carrier’s regional subsidiary, British Airways Connect, at the start of the summer 2007 season.

Analysis of the network that flybe operates this summer (excluding its operations in Scandinavia and Finland) confirms the dominant role of the UK domestic market. In terms of flights and seats UK domestic routes (plus flights to Ireland) represents around three-quarters of the airline’s operations, but in terms of ASKs (Available Seat Kilometres), which is a better indicator of revenue, the UK and Irish markets now represent just under 60% of flybe’s activities.

Analysis of flybe’s network for this summer shows that measured by ASKs, the airline’s two biggest routes are from Southampton, on the UK’s south coast, to Edinburgh and Glasgow in Scotland. Seven of the top eight routes are domestic, with seven international routes making the top 15, five of which are to Spain or Portugal. Two of the airline’s biggest routes are to London Gatwick (from Belfast City and Inverness), which will end at the start of the summer 2014 season as flybe withdraws all flights (25 pairs of slots) from Gatwick. This is in response to the world’s busiest single runway airport raising charges for smaller aircraft, to maximise its own throughput. flybe has agreed a £20m with easyJet, the benefits of which will be spread over the next 12 months. 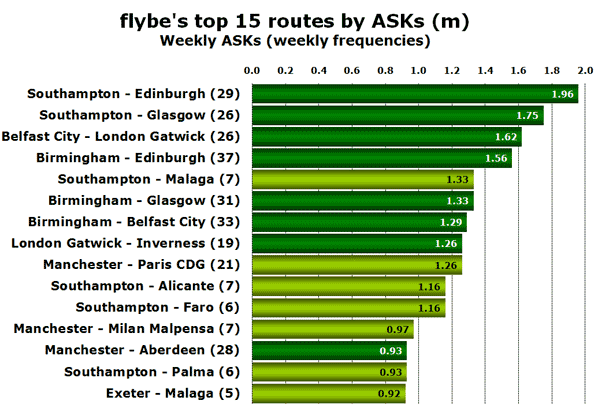 Analysis of which routes flybe has started (and dropped) from its UK airports during the last year shows that there are roughly the same number of each. Major expansion at East Midlands took place last autumn, after bmibaby failed to attract any suitors when it was put up for sale last summer and was subsequently closed.

Analysis of schedule data for July shows that Southampton Airport is flybe’s biggest UK base, in terms of flights, seats and ASKs. The airport’s relatively short runway has been a handicap in attracting LCCs that operate Airbus and Boeing aircraft, but is ideal for flybe’s fleet of Q400s and Embraer E-175s and E-195s. The biggest UK regional airports missing from flybe’s list of busiest airports are Bristol, Liverpool and Newcastle. 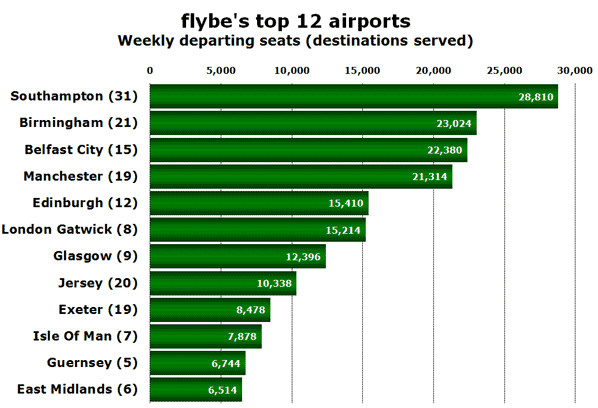 Regarding flybe’s future network development, the airline’s recent Analyst and Investor Presentation published on 21 June, revealed that the short-term goals for flybe’s UK network are:

In the medium-term, the plan is to restructure and rebalance the network into a defensible core by setting the following goals:

Southampton Airport is chosen as an example of a core airport with the following objectives:

As a result it seems clear that while flybe may not be planning to grow overall in the next few years, its route network is likely to evolve with unprofitable domestic routes likely to be increasingly replaced by new international routes.