Following the defrosting of relations between China and Taiwan, cross-strait new services have remained a focal element of the TransAsia Airways international growth strategy. Early June saw the launch of thrice-weekly flights from Taipei Taoyuan to Dayong, as well as twice-weekly services from Kaohsiung to Xuzhou.

Taiwan’s third largest carrier in terms of weekly seats (according to Innovata / Diio Mi data for August 10-16) with 12% market share, behind China Airlines (27%) and EVA Air (18%), TransAsia Airways is embarking on a period of rapid growth, driven largely by its further expansion into new international markets. The Taipei-based regional carrier, which operates a mixed fleet of nine ATR-72s, nine A320/A321s and two A330s, could this year surpass its best passenger traffic result, as weekly capacity data for August 2013 (98,388 seats) shows the highest amount of seats since its previous high in 2005 (96,396 seats). 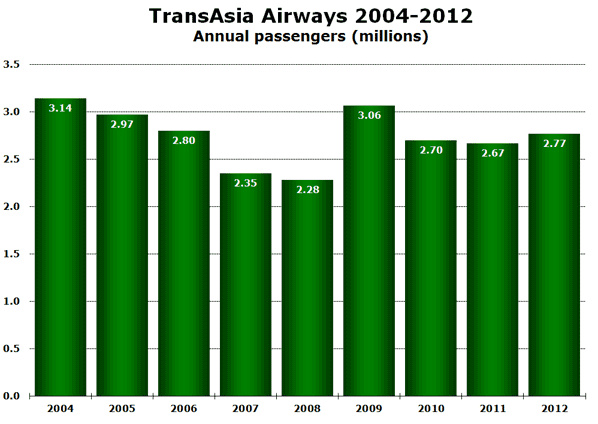 After a period of operational rationalisation in the middle part of the last decade, and some explosive growth in 2009 (despite the prevailing global economic conditions), TransAsia has consolidated its annual passenger performance over the last three years. Indeed, its load factors over this period peaked in 2010 at 79.1%, recovering from the low of 64.4% in 2004, the year in which it delivered its highest overall passenger traffic figure. With three million annual passengers to offer, and it being the largest unaligned carrier in the country (China Airlines is a SkyTeam member, while Eva Air is in Star), anna.aero wonders whether oneworld will knock on TransAsia’s doors (if it hasn’t already) given its increasing route network into China – a partner black-spot for the alliance.

The airline’s leading five routes are all domestic, and are largely flown by its 72-seat ATR-72 fleet, which is reflected in the disparity between the figures for the weekly flights and weekly seats. Conversely, the 311-seat A330-operated services from Taipei Taoyuan to Bangkok, Osaka Kansai and Singapore, all over-deliver in terms of seats in comparison to the weekly number of flights. 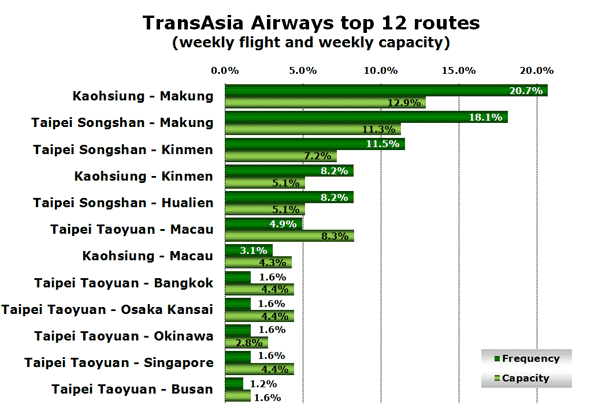 TransAsia’s leading five operational airports in terms of weekly departures (between them they offer over 90% of all flights) — Taipei Songshan, Makung, Kaohsiung, Kinmen and Taipei Taoyuan — are all growing for the airline. Compared to the same week in August 2012, the respective 2013 increase in weekly flights for the five airports are: +15% (TSA); +28% (MZG); +31% (KHH); +23% (KNH), and; +21% (TPE). Indeed, the carrier’s overall flying programme for the selected week in August 2013 will have increased by 23% to 850 weekly flights versus the same week 12 months ago.

Domestic flying in the Taiwan home market has always been a vital component in the airline’s network planning mantra – with 84% of weekly flights and 71% of weekly capacity (given the scale of its domestic operation, this has been excluded from the graph below) allocated to this task. However, as an affirmation of the carrier’s present strategic direction, in the last year TransAsia has opened up four new country markets to its scheduled services – Japan, Singapore, Thailand and Palau. This medium-haul regional expansion has largely been driven by the arrival of the carrier’s first two A330s, coming into the fleet in Q4 2012 and Q1 2013. 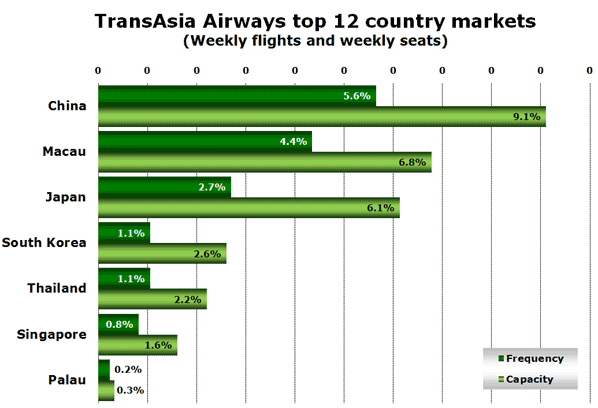 Looking at TransAsia’s flying programme for the same week five years ago, the ability to provide more cross-strait flights into China has of course produced the most marked growth, with scheduled seats over 10 times higher than they were in August 2008. In the same time period, capacity to South Korea has grown by 40%, but has fallen by 30% on flights between Taiwan and Macau. Indeed, not every new market has been a success, as TransAsia’s foray into the Vietnam market last year (launched with twice weekly flights to Hanoi) was short-lived, and the service has since been withdrawn.