On 1 May, United Airlines added Edmonton to its New York Newark Liberty International Airport network offer. While the New York airport is the airline’s third largest hub, after Houston Intercontinental and Chicago O’Hare, the Star Alliance carrier will still be trimming 4% of weekly seats this July versus July 2012. This however, did not prevent the carrier from launching flights to Anchorage last week .

Part of truly global airport system for New York, which in 2012 boasted close to 110 million annual passengers, Newark Liberty International Airport contributed just short of 34 million of those passengers. In fact, last year, the five airports which are under the operational control of the Port Authority of New York and New Jersey (PANYNJ), nearly beat their combined 2007 record yearly passenger haul of 110 million, falling short by less than 650,000. Newark Liberty’s final figure, representing a flat growth of around 1% over 2011, saw it secure its place as the #14 largest airport in the US (New York JFK was #6 (+3%); New York LaGuardia #20 (+7%)) and #38 in the global rankings. 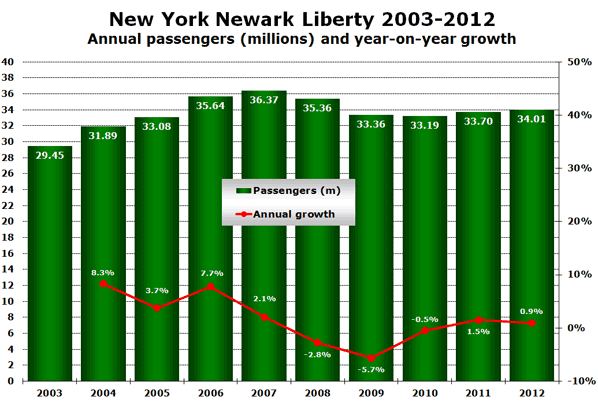 Like many airports around the world, Newark’s unabated growth through the early 2000s came to an abrupt halt in 2008, when global economic events dictated passenger traffic results rather than ambitious airline or airport growth plans. Since then, the airport has flat-lined at around the 33 to 34 million annual passenger mark, with the prospects for 2013 looking like this trend will continue, as the airport has delivered a marginal decline in traffic of -0.1% so far this year in the period to the end of April.

New York gets a report card with “excellent” all round

Entering Newark Liberty’s monthly passenger data for 2012 into anna.aero’s Seasonal Variation in Demand (SVID) calculator, the airport performs exceptionally well, generating a score of 1.44, giving it an “excellent” rating. This sees the airport nestle between Toulouse (1.40) and Vancouver (1.49) in terms of other airports which have been subject SVID’s scrutiny. Against its New York area peers, its 2012 score compares favourably, although being marginally worse than LaGuardia (1.32 – excellent) which has 90% of its flights from the US domestic market, it does beat its bigger neighbour JFK (only 60% domestic flights), but which still posted another “excellent” result of 1.72. Newark’s own domestic component of its traffic is in between the other two airports, at 76% of total flights. 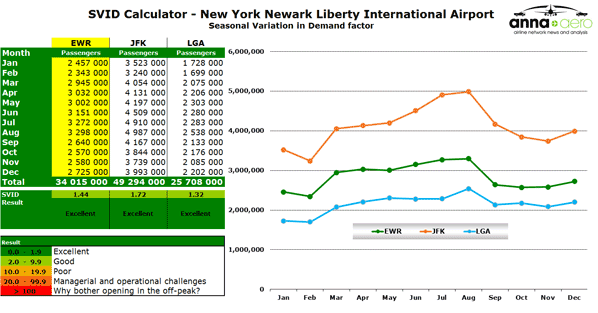 United rules at Newark, but Delta is King of New York

As a former Continental Airlines hub, the airport is now dominated by United Airlines, which along with its regional and feeder partners operating under the UA code (CommutAir, ExpressJet Airlines, Shuttle America and Midwest Airlines) combine to command nearly three-quarters of Newark’s slots. As with most US hub airports, the analysis is really about the jostle for #2 spot, with Delta Air Lines seemingly well clear of a chasing pack of four other airlines. The Atlanta-based carrier is definitely ‘King of New York’ however, with its number one spots at both JFK and LaGuardia making sure of this, with a princely American Airlines beating off JetBlue Airways and US Airways for second place in this particular competition. 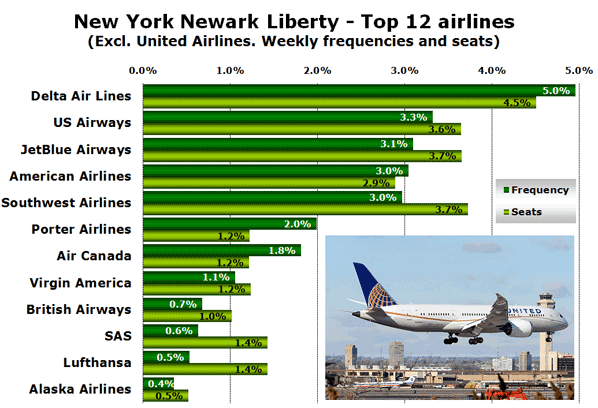 In terms of United’s share of weekly seats at Newark, the resulting figure of 70% is slightly behind that of its weekly flight share which is 74%, reflecting the high percentage of regional and feeder services at its hub. Had this graph been arranged by share of weekly seats, Virgin Atlantic would have deposed Alaska Airlines for twelfth place, resulting in a 50/50 split of domestic and international carriers in this Top 12 (albeit excluding United Airlines). Newark offers less than one-third (21) of the operating airlines than its more cosmopolitan JFK neighbour does (with 66 serving airlines), but almost double that of LaGuardia (11).

As previously stated, with 76% of all flights being domestic, and 9% being cross-border to Canada, the remaining 15% of traffic at Newark is shared between the remaining 43 country markets. Looking at the same week in July from five years ago, the airport offers the same number of country markets (45) today as it did then, although some countries have traded places in that time. As expected, JFK leads the New York triumvirate with access to 70 country markets, with LaGuardia offering just five. 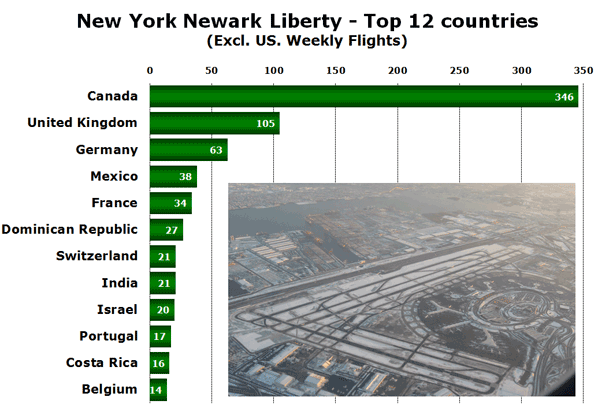 While Canada is over three times larger than #3 country, the United Kingdom, in terms of weekly flights, the North American nation is only 11% bigger than the European country when it comes to weekly seats. Belgium, cited here as being in twelfth spot, actually shares this accolade with seven other countries (Ireland, Italy, Netherlands, China, Norway, Spain and Sweden), all of which offer double daily connections from Newark.