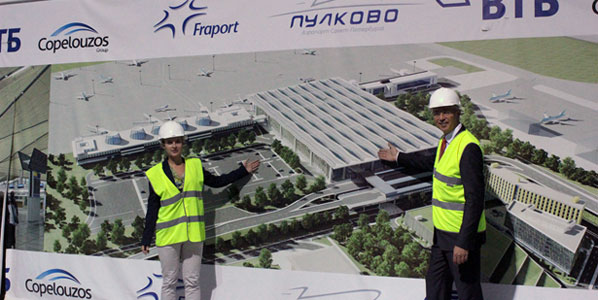 Fraport’s Chairman, Stefan Schulte, here pictured with anna.aero’s Magdalena Fas, is certain about his company investment choice: “Growing economic activity across Russia creates the need for better links for the business and – given the country’s size – you need airports. We expect the new terminal to reach its full capacity by 2018, and are already working on further expansion of our facilities here.”

Russia’s third-largest airport following Moscow’s Domodedovo and Sheremetyevo, St Petersburg Pulkovo Airport serves as the primary gateway to the Russian north-west region. In 2012, the region contributed as much as 10.4% of Russian GDP, accounting for around the same percentage of Russian exports and nearly twice as much of the country’s imports (17.5%). Russia’s largest sea port, St Petersburg is increasingly appealing to foreign investors (especially within the automotive industry with Toyota, General Motors and Nissan all investing heavily), but also to tourists attracted by the charms of the “Venice of the North”, as the city is often called.

Nearly 11.2 million passengers travelled through St Petersburg Airport in 2012, an increase of 16.1% compared to the preceding year. International traffic achieved stronger growth (+20%) than domestic (+11%) with CIS markets leading the traffic expansion (1.2 million passengers in 2012, up from 1 million in 2011). On average, passenger traffic in St Petersburg has grown by 18.2% since 2009, when a slump of -4.4% was noted. Fueled by robust demand from sun-starved seasonal travellers, traffic figures were up by 21.5% in May, with year-to-date 2013 growth reaching 15%. 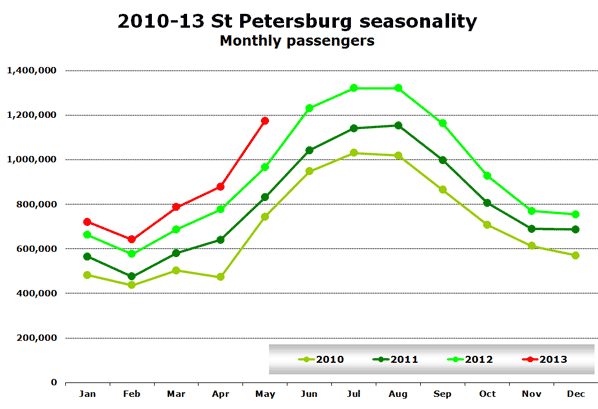 Closer examination of monthly passenger figures shows that in spite of the sharp growth in recent years, traffic in St Petersburg is still highly seasonal. Analysis using the anna.aero SVID Seasonality Calculator shows that, while a considerable flattening of demand has taken place since 2010, there is still a way to go to catch up with other Russian airports, such as Novosibirsk, whose seasonality profiles are much more balanced. Nevertheless, the airport has already lifted itself from “Poor” to “Good” category (SVID score 2010: 10.9; 2012: 9.1).

Examination of Innovata weekly average data for July 2013 shows that Rossiya Airlines, together with its parent company Aeroflot, dominates the domestic market from St Petersburg Pulkovo. Rossyia offers flights to a total of 22 destinations nationwide, providing nearly 40,000 weekly seats with Aeroflot adding a further 15,000 on its only route from the airport (it operates 105 weekly frequencies to Moscow Sheremetyevo, St Petersburg’s second-largest domestic destination after Domodedovo). Together, Rossiya and Aeroflot account for 58.6% of weekly frequencies and 62.4% of seats in St Petersburg. 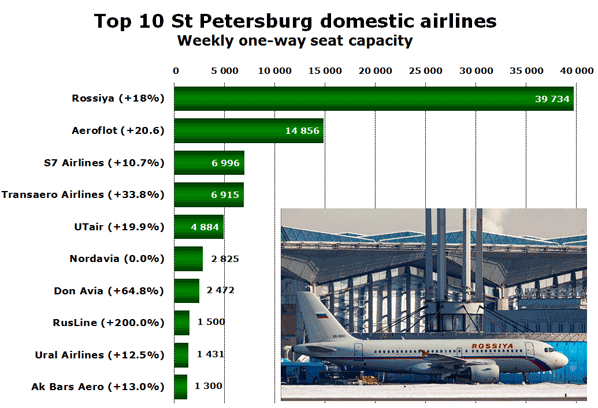 Oher Russian carriers are working hard on increasing their presence at the airport, even though none of them has more than 8% of the market in July 2013, as measured by weekly seat capacity. RusLine is the fastest growing of these, offering flights to 13 domestic destinations this summer, up from only four in July 2012. However, commanding only 1.7% of the local market, RusLine can hardly be seen as an imminent threat to Rossiya.

S7 Airlines, the airport’s largest non-Aeroflot owned domestic carrier, operates only two routes from the airport, to Moscow Domodedovo (46 weekly flights, up from 39 last year) and to Novosibirsk (five weekly, unchanged from last year). Transaero, which is close to overtaking S7 Airlines as the third biggest domestic airline in Pulkovo, has grown its offering by a third compared to last July. It has dropped services to Ufa, launching three new destinations instead – Moscow Vnukovo (11 weekly services), Kaliningrad and Sochi (twice-weekly each). Inspired by St Petersburg’s architecture, the new Grimshaw-designed terminal is nearing completion and – once opened in December 2013 – it will significantly improve the passener experience. Beginning of next year, restoration and modernisation of the iconic Pulkovo 1 will commence.

Nearly 100 international destinations can be reached directly, of which around 60 have been launched since 2010. Again, Rossiya Airlines is the largest operator, commanding 40.3% of weekly seats in the international segment, five times as many as the next contender, Lufthansa. The two carriers compete on the two largest international routes from St Petersburg – to Frankfurt and Munich, as well as to Düsseldorf. While Lufthansa offers more seats and frequencies on all of them, it has pulled its six-weekly Hamburg service in the course of last year, leaving it entirely to Rossiya. 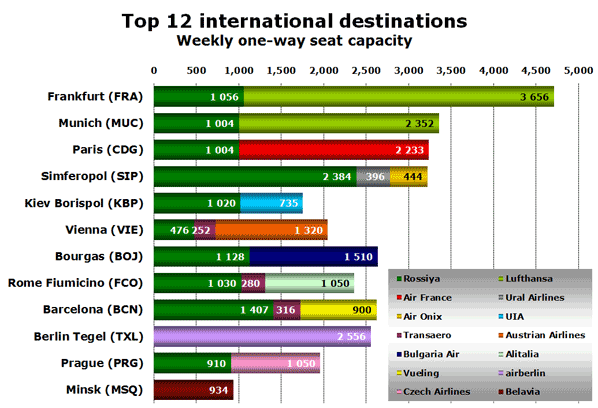 St Petersburg boasts nine brand new international destinations in July 2013, including Kiev Zhulyany by UTair (seven weekly flights) and Transaero (four); Reykjavik by Icelandair (two); Navoi by Rossiya and Uzbekistan Airways (one each); and Budapest by UTair (two). Links to five destinations have been lost compared to last year, including the five-weekly service to London Gatwick operated by Rossiya, and weekly flights to Tokyo Narita offered by Transaero (the latter also closed its Beijing route, leaving the market to Hainan Airlines).

The full opening up of the Russian market to European LCCs remains a question mark, and Fraport’s Schulte points out: “The issue is political and has partly to do with the current visa regime. At the moment, we have a stand-off.” While this is certainly the case, two Western European hybrid carriers already serve St Petersburg: Norwegian (twice-weekly to Oslo this July) and Vueling (five weekly to Barcelona). However, anna.aero found out that following its successful launch of Moscow services from London Gatwick and Manchester, easyJet is considering its options with regards to St Petersburg. Manchester and Geneva would be the first points in the carrier’s network to receive such a link.