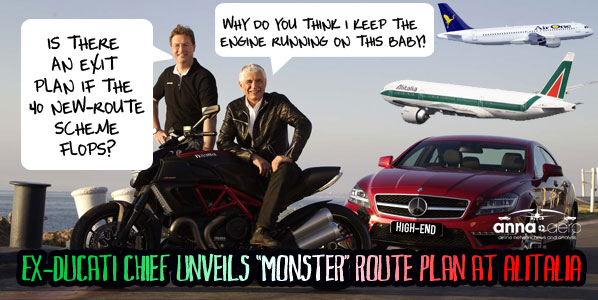 Alitalia’s new CEO since April, Gabriele Del Torchio, has a solid career in industry, most recently as the boss of Ducati, the high-end motorbike maker which he joined in 2007, just as the financial shock took hold. Defying gravity, he soon doubled market share, proclaiming: “This is testimony to Ducati’s capacity to react, even during a contraction in the market, we owe this to the creation of specific strategies within our plan to be specialists and segment leaders.” Obviously it's now hoped he'll bring the same magic to Alitalia (fittingly Ducati’s best-selling bike is called The Monster).

Alitalia, under its newest CEO Gabriele Del Torchio, recently announced a new Industrial Plan 2013-2016, which aims to bring clarity to the airline’s future network development. One of the key points was to clarify the role of Air One in relation to Alitalia. According to the latest plan, Air One (which will be rebranded to have a greater likeness to Alitalia) will be a web-oriented Smart Carrier, dedicated to serving point-to-point short- and medium-haul connections from four bases; Catania, Palermo, Pisa and Venice.

Alitalia will strengthen its operations at its main Rome Fiumicino hub and increase its presence at Milan Linate again (once the Alitalia hub) and Milan Malpensa airports (where it now has competition). Rather than Air One, Alitalia will operate all national and international connections at these three airports, with the aim of increasing international and intercontinental services at all of them. In addition, this winter season will see the start of a major “Re-Hubbing” project at Rome Fiumicino Airport, with the aim of improving timings for business passengers wanting to make day return trips, but also to improve connections for passengers from other Italian airports, who wish to take long-haul flights, for example, to the Americas.

Alitalia has been surprisingly candid in revealing which new routes it envisages launching in the next three years, providing a list of almost 40 potential new services across four airports, all of which are to international destinations.

Even before this latest announcement, it had been clear that Alitalia’s network development was focussed on reducing domestic capacity, and adding new international destinations. According to Assaeroporti data for the first five months of 2013, domestic traffic at Italian airports is down 10.3% to 21 million passengers, while international traffic is up 0.2% to 31.1 million. Since the start of the winter season, Alitalia has launched 14 new international routes from Rome Fiumicino, all of which are still operating this summer.

Of the 14 new routes, only five face direct competition, although Copenhagen and Prague routes have  intense competition, and Alitalia only offers a twice-weekly flights on these services.

Several of the Alitalia Group’s domestic routes appear to suffer from a kind of identity crisis, with the marketing airline and operating airline frequently changing. The following domestic routes which were marketed by Air One last summer, and operated with at least daily flights, are now no longer sold under the Air One brand.

The following domestic routes which were served at least daily by Alitalia last summer, are no longer served by Alitalia (AZ), though four of them (all involving Venice) have been transferred to Air One (AP) for at least the summer season.

In four of these markets, there are now no carriers linking the two airports, while Ryanair is now the sole service provider on two of the Bologna routes. There are also other domestic routes which Alitalia is not serving this summer, but which were being operated with less than daily flights last summer.

Analysis of Innovata/Diio Mi data for July suggests that the combined Alitalia and Air One have cut weekly seats by around 11%, but that the number of weekly ASKs offered is down less than 6%, indicating an increase in average sector length, all consistent with the airline’s strategic focus on cutting domestic capacity and increasing international capacity.