Jet2.com fastest-growing airline in Spain in June; airport traffic down 5.9% in 2013 H1 as Ryanair shrinks operations Jet2.com has added new Spanish routes from Manchester, Blackpool and Glasgow this summer, and each has been celebrated with splendid cakes. Jet2.com increased its passenger numbers in Spain this June by 19%, while other LCCs, such as Ryanair and easyJet have cut their capacity at Spanish airports.

According to data from Aena in the first six months of this year, Spain’s airports have seen passenger numbers fall by 5.9% to 84.64 million. Unlike in the first half of 2012, when the demise of Spanair contributed to an almost 5% drop in traffic, this year no airlines have collapsed in the Spanish market. Among Spain’s busiest mainland airports there are significant differences, with Alicante (+6.9%) and Malaga (+0.5%) reporting growth in the first half of this year, while Seville (-15.4%) and Madrid (-14.7%) both suffered double-digit falls in passenger numbers. 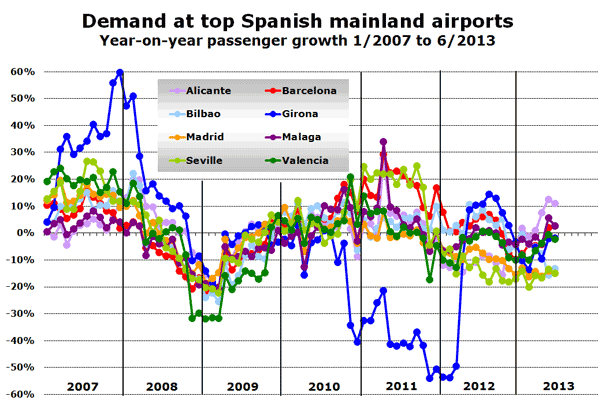 Analysis of data for June 2013 and comparing it with data from a year ago, reveals that among the top 15 airlines, the fastest-growing is UK leisure airline Jet2.com which has increased its passenger numbers in the Spanish market by almost 20%, up from 365,000 in June 2012 to 437,000 in June 2013. The second fastest-growing major airline in the Spanish market is another UK ‘hybrid’ airline, Monarch Airlines. It has increased its passenger numbers at Spanish airports by almost 19% to 433,000 passengers. 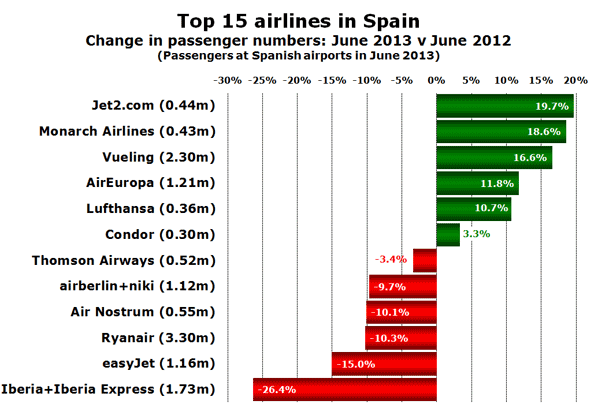 Europe’s two biggest LCCs, Ryanair and easyJet, have both cut capacity in the Spanish market, and seen their passenger numbers in June fall year-on-year by 10.3% and 15.0% respectively. In contrast, local LCC (and Europe’s fourth biggest) Vueling, has seen demand increase by almost 17%. In June, Vueling generated 33% more passenger movements through Spanish airports than Iberia and Iberia Express combined.