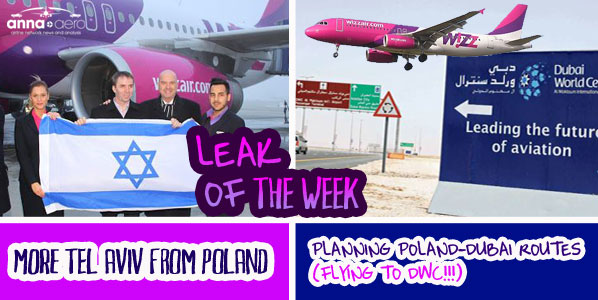 anna.aero can exclusively reveal that Wizz Air has received Polish CAA designation to Tel Aviv from Warsaw (both airports - although it decided yesterday to stay put at Warsaw Chopin) and Gdansk. The Polish authorities have also given Wizz Air designation to fly to Dubai – not a hard decision to make when the national carrier shows no interest in serving the route – a move which would further strengthen the European LCC’s position at the new Dubai World Central - Al Maktoum International Airport.

Following the launch last year of services from Budapest, and more recently in June from Bucharest, last week Wizz Air announced its intentions to fly from Cluj Napoca in Romania (twice-weekly), Vilnius in Lithuania (twice-weekly), as well as Katowice (thrice-weekly) in Poland to Tel Aviv from this winter season. However, its ambitions to service the Polish market to Israel are not going to end there, as anna.aero can exclusively reveal that the airline has also received designation from the Polish CAA (or the ULC as they are known) to fly from Gdansk, Warsaw Chopin and Warsaw Modlin to the Israeli capital. Up until yesterday, when the airline announced it would be staying at Warsaw Chopin Airport rather than returning to Warsaw Modlin, Wizz Air was ‘hedging its bets’ on where exactly in Warsaw it will eventually serve in the future. Oddly, the airline’s other two Polish bases in Wroclaw and Poznan have so far been left out of this surge of interest in new routes to Tel Aviv.

Currently, there are three airlines active in the Polish market to Tel Aviv, with nearly 93% of all seats and 15 weekly flights being offered from Warsaw. A typical start-up frequency of twice- or thrice-weekly from Warsaw to Tel Aviv would give Wizz Air a 12% or 18% market share in terms of weekly seats.

Following the recent announcement of Donetsk becoming Wizz Air’s second Ukrainian base, the LCC now has 17 operational bases. Five will now be connected to Tel Aviv, leaving 12 bases with the potential for an Israeli link. Six of the remaining bases, Warsaw above and five in the table below, already have direct flights to Tel Aviv, with eight serving airlines. The six remaining bases Skopje in Macedonia, Gdansk, Poznan and Wroclaw in Poland, Tirgu Mures and Timisoara in Romania currently have no direct flights to Tel Aviv and would allow Wizz Air to enter the market as a monopoly provider.

Wizz Air’s push further east also seems likely to deliver these Polish airports a service to Dubai World Central (DWC), the LCC’s chosen location for its embryonic plans in the UAE. These routes would join the previously announced inaugural routes to DWC from Budapest (four weekly), Bucharest (thrice-weekly), Kiev Zhulyany (four weekly) and Sofia (thrice-weekly), all due to start this winter. Again, it is rumoured that the Polish ULC has given designation to the UAE to the Geneva-headquartered airline, although not a hard decision to make when the national carrier shows no interest in serving the route.

Perhaps Wizz Air’s plans for flights to DWC have been driven by the success of Emirates’ daily flights into Warsaw. Having originally launched a daily A330 service on 6 February this year, the MEB3 carrier had already carried 58,000 by the end of June, giving the route around an 85% load factor. On long-haul services this load factor tends to be a route profitability sweet-spot, but clearly the airline thinks there is more growth out there, as it is upgrading the service to a daily 364-seat 777-300 from 1 January 2014 – a 54% increase in seats from the existing 237-seat A330. Fellow MEB3 member Qatar Airways also operates a daily A320 service to Warsaw from its Doha hub.

Growth at any price?

While any of Wizz Air’s base airports would be foolish to turn down any route development from an airline as capable as the LCC in terms of delivering passenger growth, its arrival on a service to DWC would surely sour the prospects of these airports in securing an equally prestigious (but in a different way) Dubai route from Emirates. anna.aero recently looked at which of those base airports already has a service (or not) to Dubai. That said, to quote an often-used statement by airline network development personnel in reaction to the arrival of competition in a market: “We welcome competition.” Time will tell whether they really mean it.