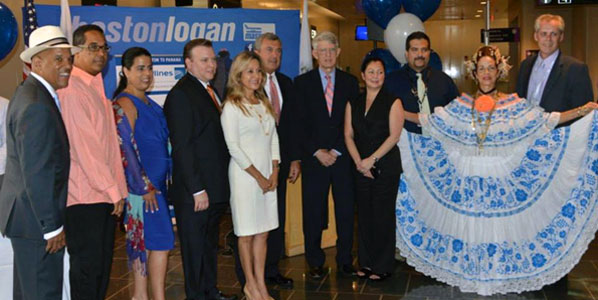 Boston is the latest addition to Copa Airlines’ network of 60+ destinations from its Panama City hub. While it is the airline’s first new destination in the last 12 months, Copa Airlines will have increased its frequencies on existing routes by 9.3% this August.

Conveniently located in central point of the Americas, Panama City’s Tocumen International Airport has greatly contributed to the success of its largest customer – Copa Airlines. In fact, the airline has been the main growth driver at the airport for over two decades now, following its 1992 decision to turn Panama City into the “Hub of the Americas”. The airport’s geographically-perfect position means that Copa can execute its plan using a fleet of narrow-body and regional aircraft only.

A decade of steady growth

Having a strong home-based carrier has turned Panama City into an indisputable success story over the last decade, as traffic continued to grow against economic odds, achieving an average rate of growth of 14.1% between 2003 and 2012. 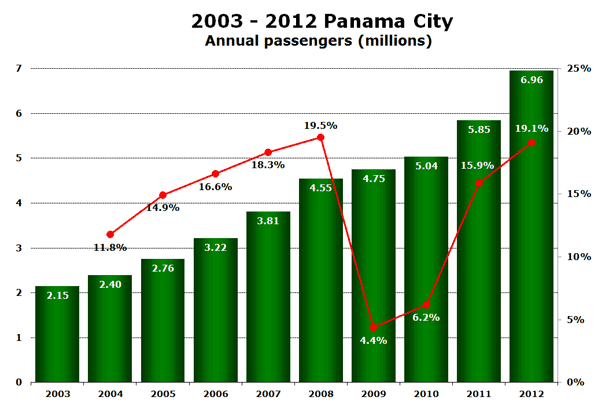 As passenger numbers grew from 2.15 million in 2003 to almost 7 million last year, double digit annual growth was maintained in all years except in 2009 and 2010. Even in those ‘quieter’ years following the global economic downturn, many global airports would have loved to have delivered growth of ‘just’ 4.4% and 6.2% respectively, rather than the passenger traffic precipice that faced many.

Copa Airlines’ influence becomes even clearer when examining the airport’s seasonality pattern using anna.aero’s SVID calculator. Panama City achieved a very good result of 0.49, which gave it an “excellent” mark, scoring above the neighbouring San Salvador Airport. Previously the hub of Taca Airlines, which is bound to see changes to its business as the new merged Avianca evolves, Comalapa International Airport scored also an “excellent” 1.04. 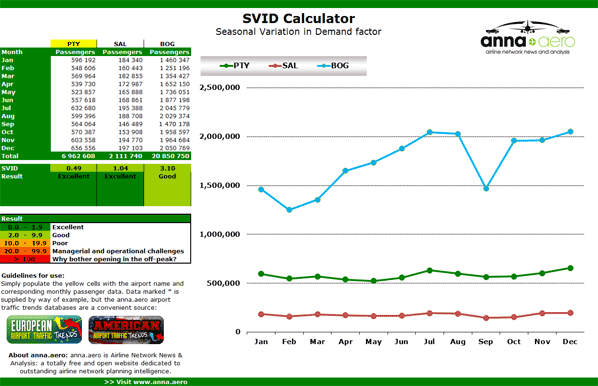 While Avianca’s main hub in Bogota performed slightly worse (result of 3.10 delivered it a “good” score), it should be noted that firstly, it is three times the size of Tocumen Airport, and secondly, that unlike the two other countries, Colombia has a sizeable domestic market.

Copa offers 941 weekly flights from Panama City across its network of 62 destinations. This constitutes an increase of 9.3% when compared to August 2012, giving Copa a frequency share of 87.8% – slightly more (+1.8pp) than a year earlier. The airline’s weekly seat offering increased by 12.8% over the same time period.

June 2013 marked the first anniversary since Copa joined Star Alliance, which makes Panama City an important stronghold for the alliance in the region. United Airlines maintains links to the airport from Houston Intercontinental (twice-daily) and New York Newark Liberty (nine weekly), while the new Avianca added a combined four weekly flights (+3 weekly flights from San Salvador, and +1 from Bogota).

American Airlines, the highest-ranking (#3) non-Star Alliance carrier, has 2.1% share of weekly frequencies in the market, and while it kept the number of flights unchanged since last year, it has modestly reduced the capacity it offers.

Only two European destinations are offered non-stop from Panama City – Amsterdam and Madrid. KLM, which offers daily flights from Amsterdam, has increased seat capacity on the 8,800-kilometre route by a quarter, as it replaced MD-11s with 777s. Fleet changes also brought marginal capacity growth to Iberia’s five-weekly service to the Spanish capital. In November, Air France will start a thrice-weekly B777 service, to become the third European flag carrier to fly to Panama City.