Qantas’ domestic ‘line in the sand’ not being achieved It is well-documented that the Qantas group of airlines (including its mainline operation, QantasLink and Jetstar Airways) has stated it will defend at all costs a 65% share of the Australian domestic market. Indeed, three Qantas bosses (Geoff Dixon – former CEO, Alan Joyce – current CEO, and Lyell Strambi, current CEO Qantas Domestic) have stressed the importance of this self-imposed ‘Service Level Agreement (SLA)’ it has virtually signed with the Australian domestic passenger. In fact, in 2004, the then CEO, Geoff Dixon, said: “This is our line in the sand and we will provide the capacity and infrastructure to defend it…” Bold words, but are they achieving this SLA contract with the Australian flying public?

On a macro-scale, looking at total weekly domestic market capacity from Innovata / Diio Mi data for 10-16 August, the carrier is failing to deliver its promise against the competition, serving up just over 60% of seats. Half its size is the (self-described) ‘New World Carrier’ Virgin Australia, with 30% of the market, the recently rebranded tigerair has close to 5%, while #4 spot is held by REX – Regional Express with 3%. Five other smaller regional airlines share the residual 2% of the domestic market.

Drilling down further into the data and looking at specific markets, first of all we appraised Qantas’ share of the domestic market between Australia’s five largest cities — Sydney, Melbourne, Brisbane, Perth and Adelaide. Unsurprisingly, services between these 10 city pairs represent a significant proportion of Australian domestic capacity – just over 20%. In fact, routes between these cities make-up seven of the top 10 domestic routes in terms of weekly seats. 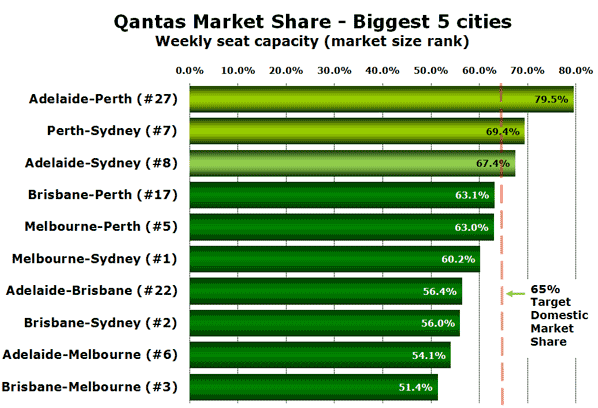 Unfortunately for the oneworld (for how much longer) airline, Qantas performs best on the Adelaide to Perth route, with nearly 80% share, however the route is only the 27th largest in terms of domestic weekly seats. Naturally, big routes attract more competition, therefore it is perhaps no surprise that the delivery of the SLA is put under the most pressure on the top three domestic routes, but resulting in Qantas being on average 9% below its capacity promise across these three city pairs.

Gap widens on other big routes

The problem gets worse for Qantas when considering the 10 next largest routes in Australia – those which involve still involve one of the big five cities at one end of the route, but also include leisure destinations like Gold Coast. Of these routes, which represent around 11% of the total domestic market, Qantas’ average gap from the 65% target has increased to nearly 9.5%, from just over 7% achieved from analysing capacity from the big five cities. 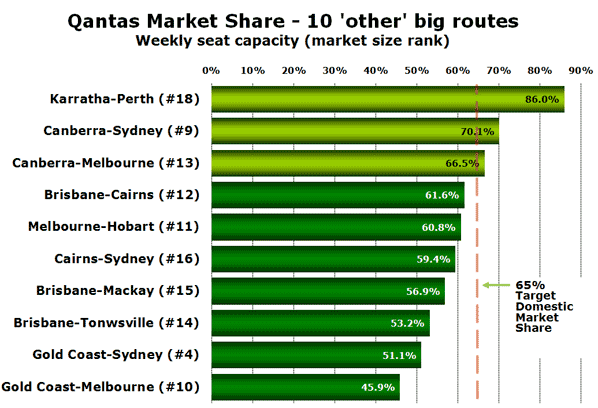 Clearly there is some work for the airline to do in order for it to achieve its own domestic capacity benchmark. Looking at order backlogs as a potential solution, Qantas does have nine 737-800s outstanding (as well as eight A380s – but these are not used on domestic flights) its regional subsidiary QantasLink has three Dash-8 Q400s on order, while its LCC subsidiary Jetstar has 14 787s on order (the first will be delivered in September), however these will replace the carrier’s A330s which are used on its long-haul operations.